It's Patriots players' favorite fashion risk, for some reason. 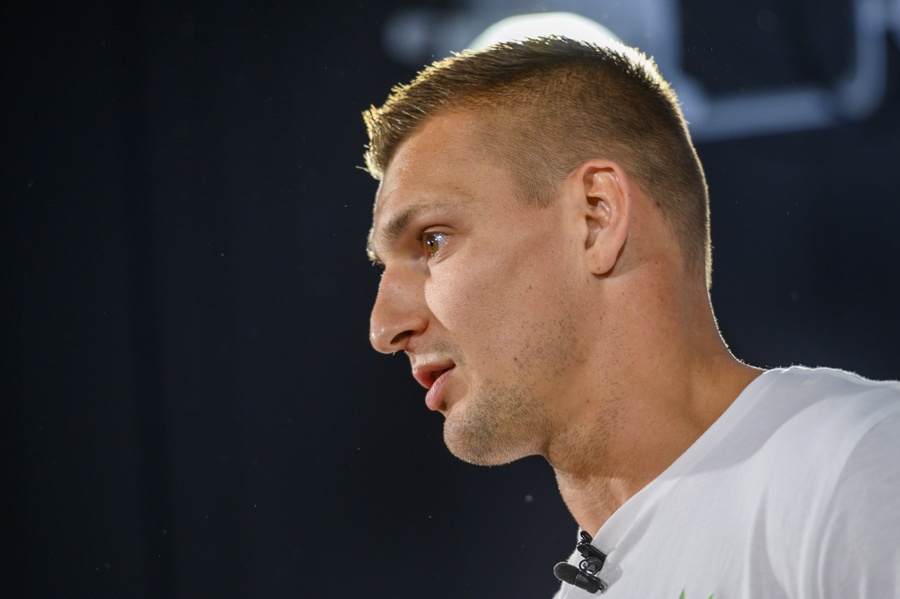 Boston, we need to talk about the Turtleneck.

You know what I’m talking about: the black form-fitting pedestal atop which one Rob Gronkowski’s chin rested as he took part in yesterday’s Patriots/Cowboys halftime report. Last night, Gronk joined regulars Terry Bradshaw, Tony Gonzalez, Howie Long, Curt Menefee, and Michael Strahan to offer up some play analysis, and instead of sporting the normal formalwear we know he has (see: the time he crashed a White House press conference in a suit and tie), he decided to try for something a little more daring: the ol’ blazer and turtleneck one-two punch.

It’s a sartorial risk, for sure—and it’s not the first time a Patriot has attempted it. Tom Brady seems to be helpless to the turtleblaze’s siren song, sporting the look multiple times despite the inevitable social media roast that follows in its wake.

brady looks like the overconfident european assassin who dies in the last twenty minutes of an action movie pic.twitter.com/dXvX47xtxS

Yesterday, it was Gronk’s turn to do the Ron Burgundy—and to face the Twitter backlash it wrought. As screenshots of Gronk’s ’fit began making the rounds on the internet last night, fans definitely didn’t hold back, likening him to everything from a Bond villain to a youth pastor.

Why is Gronk dressed like a Russian hitman pic.twitter.com/zeBxJzW4WF

Gronk looking like a frat boy with an art degree pic.twitter.com/oRGEryXbrP

Anyone else curious why #Gronk was dressed as a 1960s San Francisco beat poet yesterday? #NFL pic.twitter.com/OkudcKQb4x

@NFLonFOX Is it me, or did Gronk look like he was about to demand 1 million dollars or destroy the earth with a death ray? pic.twitter.com/PJYIPWOm1e

Let’s unpack this ensemble, shall we? Blazer: fine. Pocket square: passable. Turtleneck: whoa. In my opinion, that’s the real offender here. A turtleneck can work on a Timothée Chalamet or a Donald Glover, but something about Gronk’s angular jawline perched atop this teeny tiny neck sleeve just looks precarious and wrong. And his chosen accessories—a near-imperceptible goatee on his chin and a hint of terror in his eyes—definitely don’t help. Gronk, were you blackmailed into this Look? Or was that noir turt simply squeezing your powerful neck too hard?

I choose to believe, however, that Gronk’s fashion choice last night was a way for the former tight end to force us to reckon with a difficult truth: Boston’s most beloved beer-soaked, ball-spiking man-child is growing up. He’s definitely not coming out of retirement. He’s started a business. He’s a TV broadcaster. And, just like those of us who got weird haircuts when we went to college, he has chosen to commemorate this new phase of his life with a regrettable aesthetic choice. Who among us can’t relate?