Last night's 1.2 inches of snow were just a warm-up. 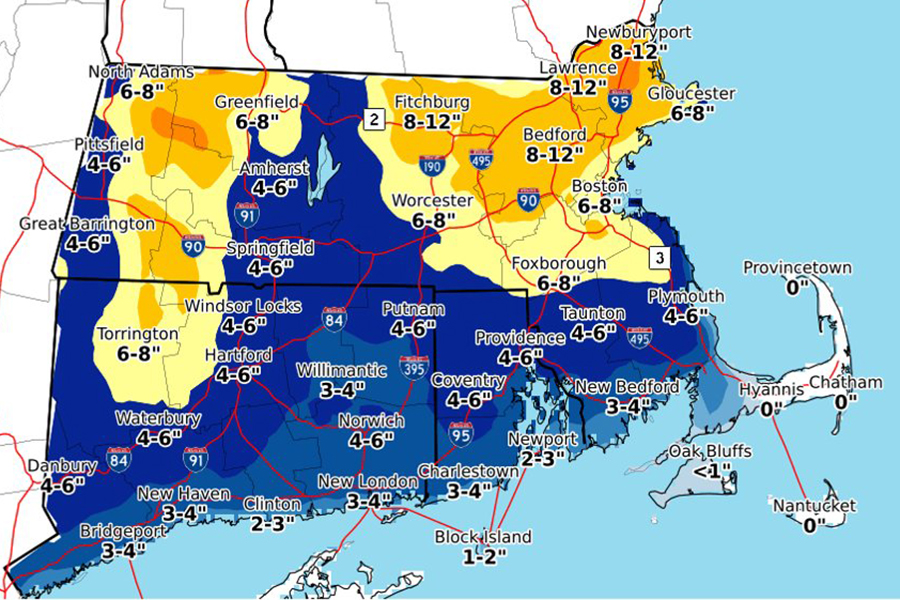 Boston Public Schools will be closed Tuesday. No buses will be running and all after-school activities are cancelled. All BCYF center will be open from 10 a.m.-6 p.m.

The first snowfall of the season may be on pause for a bit here in Boston, but it’s coming back in a big way later tonight, according to National Weather Service meteorologist Kim Buttrick. Per NWS predictions, the city will see 6-8 additional inches of snow starting Monday and continuing into midday Tuesday, potentially snarling both the Monday evening and Tuesday morning commutes.

While the storm that dusted the streets and bushes last night is now mostly on its way out, a small piece of it has broken off and is lingering off the coast of New Jersey. That storm will be the primary player in tonight and tomorrow’s weather event. As that storm curves northeast, Buttrick predicts, it will draw in colder air, and the unpleasant drizzle currently falling will become heavier and more consistent, then transition to snow. It’s uncertain when the changeover will happen in Boston, but heavier snow will likely develop across north and central Massachusetts around 2 p.m. That snow will make its way to Boston by 10 p.m. at the latest.

Hopefully you bundled up on your way out the door this morning, because temperatures are projected to fall over the course of the day, from 38 degrees now to 34 degrees at 5 p.m.—or just 23 degrees with wind chill factored in. Temperatures will likely fall below freezing after midnight, and remain that low for the morning commute, bringing a risk of black ice Tuesday morning.

Coastal flooding and scattered power outages may also occur as the storm brings high winds to the area. Eastern Essex, Eastern Plymouth, and Nantucket counties are all under a coastal flooding watch from 2-5 p.m. Boston is predicted to see sustained winds of 15-25 mph, with gusts reaching up to 35 mph. These aren’t particularly significant winds, but when they’re paired with cold temperatures and snow, they could topple trees and power lines.

Air, ferry, and commuter rail travel will likely all be impacted tonight and tomorrow. Plan for delays, especially if you’re headed north or west out of Boston on the commuter rail tonight, Buttrick says. A representative for Boston Public Schools says that they are watching Tuesday’s weather closely, and will have a final decision regarding school closures “sometime in the early evening” on Monday.

The snow is projected to peter out by about noon on Tuesday—but even without falling snow, it’s going to feel like full-on wintertime around here. The rest of the week is projected to be dry but frigid, with lows falling in the 20s. Thursday evening will be the chilliest, with temperatures below average, so if you’re planning to head out for the Boston Common Tree Lighting that evening, you better layer up.