The Trump fanboy has been sending constant flattering emails to the White House aide. 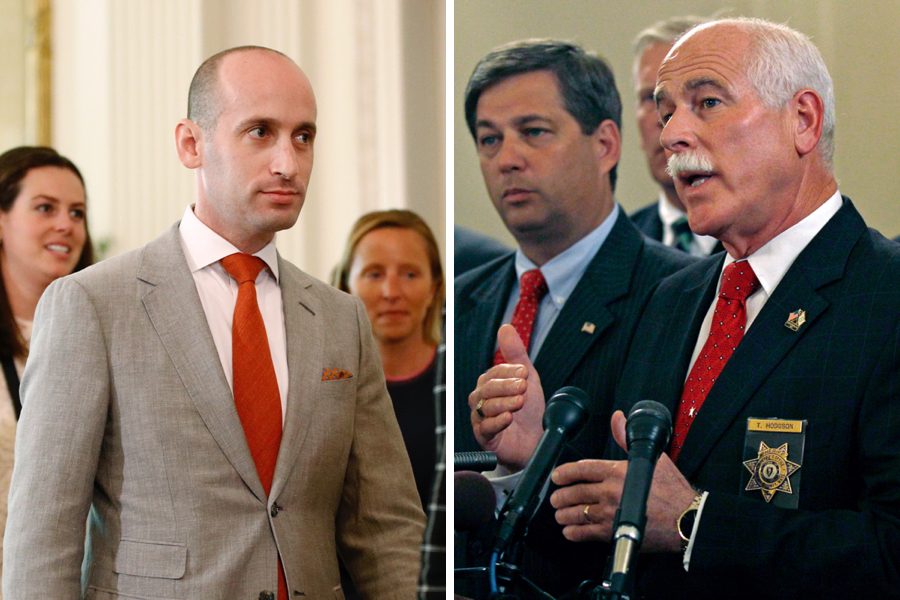 I sort of gave up on following the career of Thomas Hodgson, the slavishly Trump-supporting sheriff of Massachusetts’ Bristol County, who’s now head of Trump’s reelection campaign in the state. The things he gets up to in search of a place in the spotlight follow a trend that began long before the Trump Era, and his efforts to get the White House’s attention are so transparent and predictable, there’s just not much left to say about it. Yes, of course he would offer to ship his own inmates to the border to build the wall. Clearly he would call for sanctuary city leaders to be arrested, or spend his days dreaming up new and exciting ways to harm and dehumanize prisoners in his care. No surprises there. He’s probably thrilled I’m bringing all this up again.

But sometimes, man, the guy really goes above and beyond, and his cruel and embarrassing antics are crueler and more embarrassing than you or I could ever imagine. Case in point: his ongoing courtship of sneering anti-immigrant Trump advisor Stephen Miller. As it turns out, according to the Boston Globe, when Hodgson is hoping to score points with Miller, no one is safe. Not even his own church.

New evidence of his exploits have emerged in emails obtained by Globe columnist Yvonne Abraham, which show he has sent hundreds of messages to Miller over the past several years. They reveal an ongoing campaign to flatter Miller with praise of his TV appearances and press conferences, and to keep him updated on what’s happening in his home state, presumably to help the Trump administration bring the hammer down on his neighbors. (Miller, hilariously, apparently brushes him off with one- or two-word replies). In one case, this included snitching on the Catholic parish Hodgson himself attends:

Hodgson even reported his own church, having spotted leaflets in several languages informing immigrants of their rights when dealing with law enforcement: “Stephen, I thought you might like to see samples of cards I discovered in a holder at the back of St Julie’s Church in Dartmouth, MA. while attending mass last Sunday,” he wrote in August 2017.

On Wednesday, Hodgson said it was his duty to inform the White House of “efforts to try to help people avoid abiding by the law.” Asked whether it was a bit much to dime out his own parish, Hodgson said, “I don’t care if it’s my church or somebody else’s church.”

As you may have heard, we’ve learned a lot about Miller recently. Ahead of the 2016 election, newly leaked emails show, he was in frequent contact with a Breitbart reporter, and had a habit of sending her articles from white nationalist websites like VDARE and American Renaissance and encouraging her to write about them. After all, you are the company you keep.