Was it vandalism or meme-making? Or both? 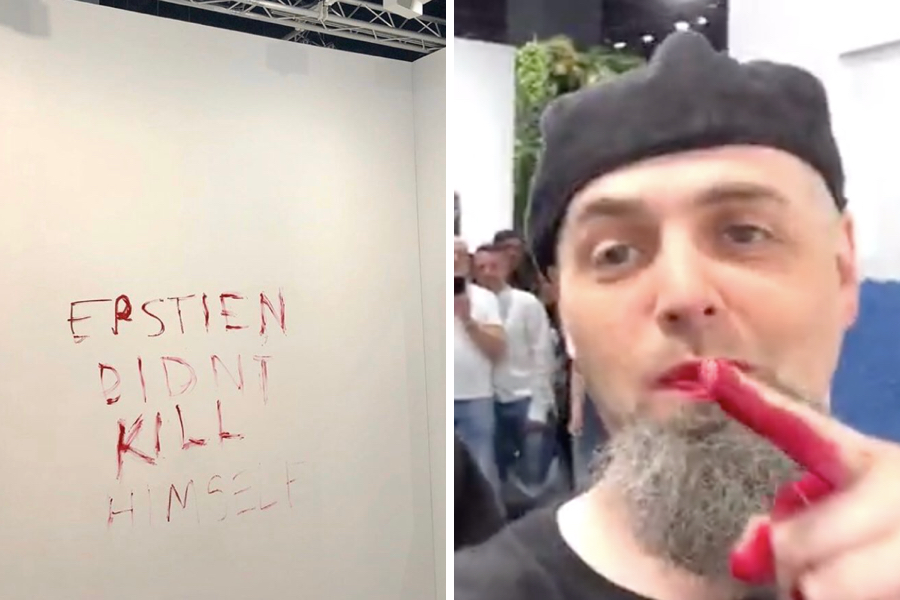 The saga of the banana duct-taped to the wall keeps getting more and more interesting, and now a Boston-area man has left his mark on the internet phenomenon. Rod Webber, a local visual artist and filmmaker, was arrested and spent the night in jail Sunday after he scrawling the words “Epstein Didn’t Kill Himself” on the now-famous space in Miami’s Galerie Perrotin.

The wall had gained significant notoriety after a banana fastened to it by a strip of duct-tape had been valued at $120,000, and re-entered headlines when a performance artist simply removed the pricey piece of fruit and ate it. It quickly became the most buzzed-about piece of art at the renowned festival, drawing massive crowds to the gallery and fueling countless jokes and think pieces online.

That’s when Webber, who had been in Miami to display his artwork at the neighboring Fridge Art Fair, seized his moment, making his way through the crowd in the gallery and up to what at that point had become the most-discussed blank wall in recent memory, and scrawled his message. Photos shared widely show security at the gallery show his handiwork, as well as security scrambling to cover it up with a large, white sheet of paper.

The duct-taped banana at Art Basel is gone and has been replaced with “Epstein Didn’t Kill Himself,” which security quickly covered up. 😂 pic.twitter.com/nPtnuCm6sc

Video he recorded himself and later shared on Facebook shows Webber, sporting a long chin beard and with his lips coated in a vibrant rouge, using a lipstick-smeared finger to write the words on the wall, misspelling Epstein as “Epstien.” He’s then confronted by gallery security, who ask him to stop, but he protests, noting that artist David Datuna hadn’t been punished for downing the banana earlier in the weekend. (Art Basel says in a statement that Datuna “violated our rules and regulations and was escorted out of the fair,” but he was not arrested.)

“You’ve kind of set precedent here,” Webber can be heard saying to a gallery staffer in the video.

“We understand, but it’s not an open free for all,” the staffer replies, adding, “We’re just asking you to not damage the artwork that’s near it.” She also says the gallery would not press charges, but that he needed to leave. Moments later, the video shows Webber being led away by security, and he was later arrested by police and charged with misdemeanor “criminal mischief.”

Reached by phone on Monday, Webber says he was held overnight in jail before he was released at around 5 a.m. He also thinks he got a raw deal, and believes his stunt wasn’t vandalism or “criminal mischief,” but was in keeping with the spirit of the weekend.

“Honestly, I didn’t come here with the intention of doing that, but it seemed to be screaming out that what they were doing was, like, meme warfare. It’s like, art is no longer art. It’s memes. I mean, at least if we’re supposed to believe what the Perrotin gallery is pushing on us, so I would hope that’s not actually true,” he says. “No meme can be any better than another meme unless those memes collide. And I felt as though, let’s jam ’em together like Reese’s Peanut Butter Cups.”

So why was he treated differently?  “I imagine I’m just not famous enough,” he says, “or I’m not part of a preplanned publicity stunt, which is likely what was going on, and I called them on their bullshit.”

This is not the first time Webber, who lives outside Boston but has asked me not to say where, has ended up behind bars. He says he’s been arrested “countless times at Trump rallies” and while documenting right-wing protests. He was among dozens arrested this year during Boston’s “straight pride” rally, which he had been filming.

The phrase “Epstein Didn’t Kill Himself” has gained traction online both as a rallying cry for people who suspect the convicted pedophile Jeffrey Epstein did not actually commit suicide in his Manhattan jail cell this year, and, of course, as one of the year’s most durable memes. It’s been seen online in posts that include rearranged Christmas stockings, uttered live on TV news, and even spotted on a sandwich board outside a Dorchester pizza shop.

Webber, who says he isn’t convinced one way or another the fate to Jeffrey Epstein, has nevertheless leaned into the meme as a way to make a broader point about government secrecy. He tried to get on the ballot in New Hampshire as Rod “EpsteinDidn’tKillHimself” Webber. He was not successful.