"He was a beacon of hope for all," his family says. 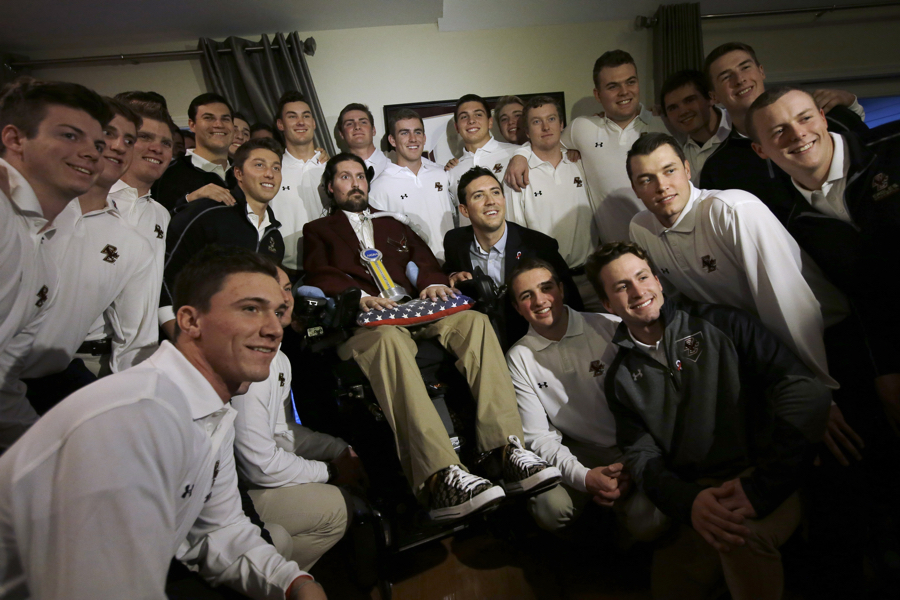 Pete Frates, the Boston athlete and icon of the “Ice Bucket Challenge” phenomenon, has died, his family says in an announcement released Monday.

“Today Heaven received our angel,” the family wrote in a message shared on the Boston College website.”Pete was an inspiration to so many people around the world who drew strength from his courage and resiliency.”

Frates, 34, was a celebrated baseball player for Boston College who in 2011 was diagnosed with ALS, a rare and mysterious degenerative disorder. He gained renown in Boston and around the world in 2014, when videos of people dumping buckets of ice over their heads to raise awareness for the disease were all but inescapable. In just over a year, the “Ice Bucket Challenge” raised some $115 million for research, and offered a light-hearted platform for people to learn about ALS and connect with families whose loved ones shared his diagnosis.

He became a household name in Boston especially, and was spotted at Red Sox games and at countless other local events leading ice bucket dumps (when it was his turn, he used ping pong balls). In 2017, Boston declared September 5 “Pete Frates Day” in the city.

The family has invited supporters to make a donation in his honor to the Peter Frates Family Foundation. A funeral is planned at St. Ignatius of Loyola Parish in Chestnut Hill, and there are plans in the works to hold a celebration of his life elsewhere.

“Remarkably, Pete never complained about his illness,” the family’s statement reads. “Instead, he saw it as an opportunity to give hope to other patients and their families.  In his lifetime, he was determined to change the trajectory of a disease that had no treatment or cure.  As a result, through his determination—along with his faithful supporters, Team Frate Train—he championed the ALS Ice Bucket Challenge. In August of 2014, the historic movement pioneered social media fundraising and garnered donations globally that resulted in better access to ALS care, genetic discoveries, treatments and, someday, a cure. He was a beacon of hope for all.”

The Frates family announces with great sadness the loss of Pete Frates ’07, who has passed away after his courageous and public battle with ALS. Read the Frates Family statement: https://t.co/5nVJLeGjLC pic.twitter.com/PL4hT9yquI

Pete Frates was the definition of an inspiration.

His courage, determination, and fight made Boston – and the world – proud. The impact he made on all of us will never be forgotten.

The Bruins offer their sincere condolences to the Frates family during this difficult time. pic.twitter.com/2oFPGVJ4AZ

Pete, you changed our city & our country for the better and made a difference in the lives of countless people. You helped us remember that we’re all one family & we have to look out for one another. There’s no telling how much good you’ve set in motion. RIP, my friend. #GoEagles https://t.co/aPjfqWQDvm

You changed the world Pete. Im so very proud to have called you my friend. Heart hurts a lot today but ur name and legacy will live on forever. Rest easy my friend – we’ll continue to spread your word. Boston was so lucky to have you 😔🙏🏿 #BostonStrong #alsicebucketchallenge #rip pic.twitter.com/LxHtExXWZN