Prognosticating on the symbolism behind everything Tom Brady does is practically a sport of its own. 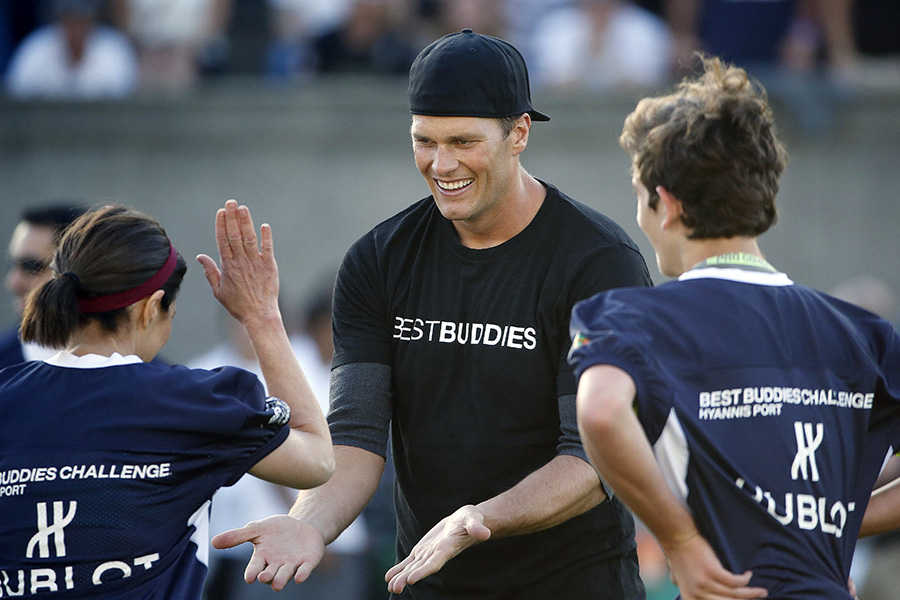 Maybe you tuned out the chatter about Brady’s odd contract negotiations and impending free agency. Perhaps you chalked the sale of his Brookline mansion up to the QB just wanting a change of scenery. But as the saying goes, one is an example, two is a coincidence, and three is a trend, and it seems as though we’ve now received a third sign that the GOAT is starting to get his (Boston) affairs in order.

In a press release yesterday, Best Buddies International announced that Brady will step down as honorary co-chair of the Best Buddies Challenge: Hyannis Port, after 16 years in the role, taking on a “Global Ambassador” position instead. The Challenge, an annual cycling/walking/running fundraiser, raises money for Best Buddies International, a global 501(c)3 that supports people with Down syndrome, autism, Fragile X, Williams syndrome, cerebral palsy, traumatic brain injury, and other undiagnosed disabilities.

This development feels…significant. For Bostonians, it’s impossible to separate Best Buddies from Brady. Since he got involved with the organization in 2003, he has put in ample face time at Best Buddies events, made high-profile donations, and helped the organization raise over $20 million. On top of that, he developed and annually participated in the Tom Brady Football Challenge, the Best Buddies Challenge weekend kickoff event which brought Patriots, local celebrities, and Buddies together on the Harvard Stadium field for a competitive game of football. The Tom Brady Football Challenge has been a beloved tradition for years (who wouldn’t be entertained watching congressmen try to take on Julian Edelman?), and Brady’s enthusiasm for his own event has never been a secret.

To my Best Buddies, I simply want to say thank you. For the past 17 years, you have taught me so much about friendship. You always try your best, lead with love and relentless positivity, and bring the best out of everyone you come into contact with. You are some of the most caring and kind people I have ever met, and that has made you some of the best leaders I have ever met. Thank you for welcoming my family and teammates with open arms all of these years — Benny and Vivi can’t stop talking about how much fun it was to play with you all a couple weeks ago, and we look forward to what’s ahead! Best always your friend, Tom PS – What’s up Nick! Great game man!!!

With Brady’s departure as co-chair, however, the event will cease, a spokeswoman for Best Buddies told Boston. Instead, the Best Buddies Challenge weekend—which will now be co-chaired by the seemingly-AI generated team of Joe Kennedy III, Guy Fieri, Julian Edelman, and Jayson Tatum—will kickstart with an “extensive culinary experience” and a private concert at the new Hub on Causeway. The event will include some nods to Brady, through recipes from TB12 and Allen Campbell, Brady’s former personal chef, but the Buddies/Patriots showdown is now on a time out.

“Since 2003, Tom has proven himself to be a relentless and committed advocate for individuals with disabilities, always going above and beyond the call of duty to help promote a world of inclusion and opportunity for this population,” Anthony K. Shriver, founder, chairman & CEO of Best Buddies International, said in a release. “We are forever thankful for Tom’s commitment to our cause.”

Sure, there could be plenty of reasons why Brady’s stepping back from his local involvement with the group. Maybe he wants to focus on his kids, his TB12 fitness brand, or his neuroplasticity. But it’s really hard to imagine Brady on the sidelines of his favorite event, enjoying a plate of trashcan nachos in the crowd. When you connect the dots between this announcement, the mansion, and the contract, you can’t deny the picture that starts to take shape—a potentially Bradyless Boston.