In the 2010s, Boston Learned to Fear (and Hopefully, Someday Fix) the MBTA

This was the decade when we saw just how troubled our transit system was, and made our voices heard. 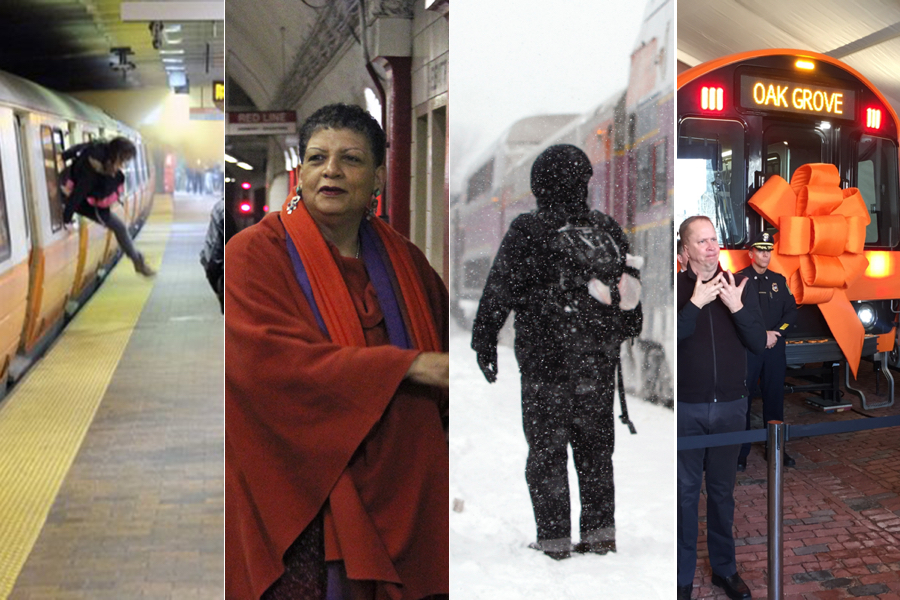 Ten years ago, the MBTA was a transit system on the move. There were ample signs of progress, fueled by new technology and invigorated by a focus on day-to-day improvements to what riders experienced on their way to work. Nudged by a lawsuit, the T was expanding accessibility, newly public location data paved the way for transit-tracking apps, and countdown timers on T platforms flicked on for the first time. The state had formed MassDOT, raised the gas tax, agreed to bankroll a long-awaited extension of the Green Line, and leased out the North Station Garage, offering a new source of revenue to fund the agency’s ambitions.

But there was trouble brewing. Nearly a quarter of the T’s budget was spent servicing debt, thanks to a gift from the Big Dig era that kept on taking, and projects were moving slowly, while a multibillion dollar backlog of needed repairs kept smoldering behind the scenes. Some had issued dire warnings, like former Hancock CEO David D’Alessandro, who in 2009 famously said it wasn’t safe to ride the Red Line. But the T in the first half of the decade couldn’t have known what was actually coming its way.

“To some extent it should not have been a surprise. The T was really operating threadbare. The Orange and Red Line cars, many of which broke down in the winter of 2015, we knew that they were 30 and 40 years old. You just can’t run equipment like that on good days, let alone bad days,” says Rich Davey, who was MBTA General Manager in 2010 and 2011 and later served as Transportation Secretary from 2011-2014. “I think we should have seen it coming that the T was probably one serious crisis away from really grinding to a halt.”

Then in 2015, the snow came, and it just kept coming. It was a Jon Taffer-from-Bar Rescue-level stress test, and the MBTA failed. By spring, riders had seen crippling delays and outright service suspensions for days on end, and the series of cataclysms and calamities made clear what had somehow not quite registered in the years prior: The MBTA was in bad shape, and its accumulating problems had reached a critical mass. Gobsmacked by the depth of the failure and the idea that she would somehow be to blame for it, MBTA General Manager Beverly Scott announced her resignation in a blaze of glory before the snow had even melted. Even “God Junior” couldn’t have kept the trains running in those conditions, she said at the time.

She was right. Half-century-old railcar engines were ill-equipped for the historic snowfall and choked on it. Switches froze solid and wouldn’t budge. Ice-coated third rails caused power systems to short out. Plow-equipped Commuter Rail trains limped and stalled. By season’s end it was more snow than Boston had ever seen, and doomsday arrived: The task of getting trains back online became so insurmountable, the MBTA simply shut the entire system down—twice. Reached by email this month to talk about this pivotal moment in T history, Scott declined an interview, but said she was “personally touched by the heart and spirit of the vast majority of T employees” she worked with at the time for “making it happen everyday despite decades of insufficient investment.”

Joe Pesaturo, the MBTA’s spokesman for the past 22 years, will remember that winter forever. “It was hell,” he says, recalling his weeks of 15 hour days during the crisis. “But I like to think some good finally came out of it.” Presented with one of his first major crises as governor, Charlie Baker formed the Fiscal and Management Control Board and staffed it with experts from the public and private sector, who were then tasked with taking a fresh look at these ancient problems. In the five years since, it’s given the local press and T riders a look at the ups and downs of the MBTA that’s more transparent than ever. “All the warts are there to be seen by the public,” Pesaturo says. “Under this new governance, everyone is kept on their toes.”

But the historic snow wasn’t the only event that kept the T’s frailty at front of mind in 2015. Boston 2024 had come knocking in January of the same year, and from a transit perspective, the timing couldn’t have been worse. Davey, who led the Olympic effort after stepping down as Transportation Secretary, views the Snowpocalypse as one of many reasons the bid went up in flames, pointing to polling that showed support for the Games sagging after the storm. “What we often heard about 2024 is, ‘Well, if we can’t manage a winter storm in 2015, how can we manage a couple hundred thousand visitors for three weeks nine years later in the summer?’” he says. “I always thought that was a bit incongruous, but it was a symbolic moment where the T just fell down pretty dramatically and people used that as a symbol to say, ‘We in Boston can’t handle [the Olympics.]’”

One refrain from the bid’s organizers had been that the Olympics would give the city a new imperative to get its trains and buses in order—a deadline to get the T on track. But for Chris Dempsey, the No Boston Olympics co-chair who now heads the nonprofit Transportation for Massachusetts, that always rang hollow. Any improvements tied to the Olympics push would almost certainly have put greater stock in summertime fixes, rather than ones focused on, say, de-icing switches and clearing snow, he says. “What the winter of 2015 exposed is that the transit system we had was not working, and it was not working for people who rely on it on a day-to-day basis,” he says. “When that’s the case, it’s irresponsible of us to focus our attention on a three-week event serving tourists and visitors when we’re not even getting our basics right.”

As another development of the ’10s showed us, though, we didn’t need an artificial deadline to make the T’s woes feel like an urgent crisis requiring immediate attention. On social media, commuters this decade found powerful public fora for sharing their grief and rage in real time. In this era, no service interruption, runaway Red Line train or tale of heroism and tragedy on the Orange Line comes without a pissed off tweet and no smoke-filled train or jam-packed subway platform goes by without ample photo and video evidence. The T, as well as the politicians responsible for its wellbeing, are routinely bombarded with complaints fired off right from the scene of the disruption. To rely on the T these days is to be hyperaware of the health of each of the MBTA’s branches and bus routes via updates from your preferred outlet, whether that’s reading the latest message from the @MBTA Twitter account or scrolling through the #MBTA hashtag.

You might check UniversalHub, whose creator Adam Gaffin has blogged and tweeted about T issues for so long he now writes headlines about service disruptions in playful rhymes, to keep things interesting. Users on Boston’s subreddit have a more streamlined approach, with posts alerting fellow Redditors to T woes that fit a vulgar, concise mold: “Orange Line fucked,” or “Red Line is fucked again.” One popular Twitter account (one of several MBTA parody accounts on the site) writes about delays from the perspective of a forlorn soldier in the Civil War. Make no mistake about it, the collective online bullying campaign T-riders subject the agency to may be a lot sometimes, and bless the poor souls who have to absorb it day after day, but it works.

Social media also changed the nature of the job for an agency that’s perpetually in a very hostile spotlight. The T hired its first social media-focused employees in 2011, and today the job is a busy one. In between answering questions and triaging equipment failures—from broken seats and air conditioners to a train with no lights turned on—the T’s social media staff pumps out daily updates on Twitter, Instagram, Facebook, and LinkedIn, and feeds information to those digital displays on new subway cars, while sharing pics of crews doing track maintenance or waging a righteous campaign against backpacks. In the aughts, we didn’t even know when the next train was coming. Now we expect content.

Advocacy for T reform isn’t just online chaos, of course. In this decade, the effort has gotten more organized and collaborative than ever: The nonprofit Transit Matters drafted a plan to run late-night buses in Boston, and officials liked it so much, it formed the backbone of a pilot program. The Chamber of Commerce has applied pressure from a business community that’s increasingly worried about its employees’ ability to get to work reliably via public transit. The case for taking bold steps to fix the T has been made by diverse voices, like the activists haranguing Charlie Baker to take on the MBTA, or the protesters mobilizing against fare hikes and behind radical ideas, like making it free.

Despite its many challenges, the T and its riders have a lot to look forward to next year, and some bright (and shiny) spots to celebrate. A new facility in Springfield is right now churning out brand-new train cars for the Orange Line, which will grace the tracks for decades. The Green Line Extension is finally, for the first time in the roughly 1,000 years since it was first proposed, actually on its way. A recent vote to transform the commuter rail may just make the service more efficient and attractive to suburban commuters. Dedicated bus lanes are spreading like weeds—in Everett, they’re even making them sexy. Last fiscal year, the T spent more than $1 billion on capital projects for the first time ever, with plans to spend $8 billion over the next five years.

More than ever, in this decade, the T’s failures were viewed as part of systemic injustice, and the improvements coming in the next one will be seen as a barometer for how well our government is working, and who it’s working for. As we say good riddance to the 2010s and brace for the unknowns of another winter, here’s to another chance to make it right.