The Celtics’ Tacko Fall Will Conduct the Holiday Pops Tonight

Fans gave him a standing ovation at his first home game on Friday. Now he's making his Symphony Hall debut. 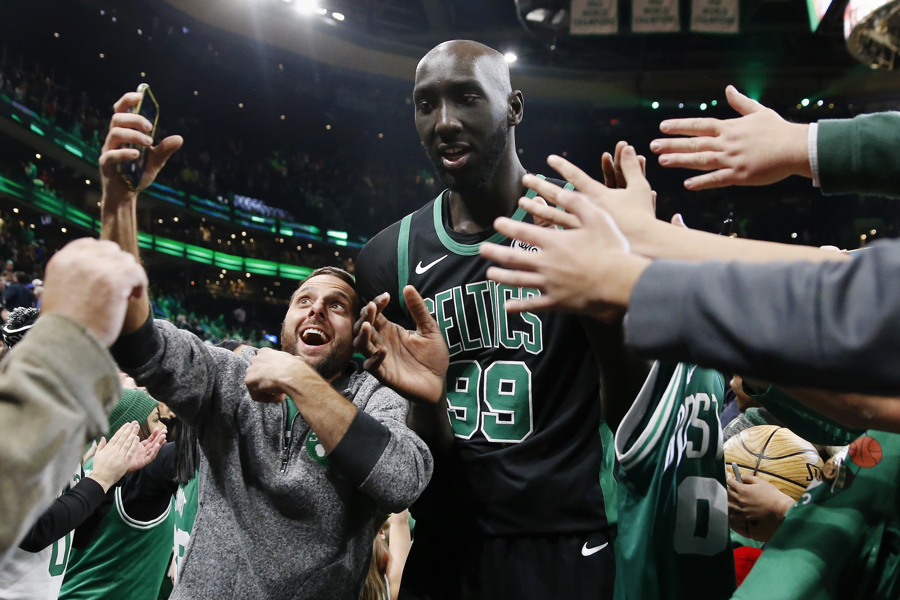 Looks like Gronk isn’t the only local sports star getting into the spirit of the season this week.

Up-and-coming Celtics center Tacko Fall, one of the most charming rookies in the team’s history, will take center stage at Symphony Hall Monday night when he steps in as conductor for the Holiday Pops.

The Senegalese player, who was drafted by the C’s this summer, will lead the Boston Pops in a performance of “Sleigh Ride” during the orchestra’s 7:30 p.m. concert.

He’ll be wearing a custom-made tuxedo, the tailoring of which the Globe documented earlier this month. It apparently wasn’t easy, as the star stands an astounding 7-feet-5-inches tall and has a wingspan of 8-feet-four-inches. Because he requires a “size-48 double-extra-long,” and there just weren’t any tuxes that fit the bill in Boston, a local tailor had to have the fabric specially delivered from Philadelphia.

Fall has quickly become a fan favorite this season, and not only because his stature gives him supernatural abilities, like being able to dunk without jumping. In his short time with the C’s, he’s already well established as a charmer, and the more fans learn about him, the more they like him. Like when we learned he’s tackling his fear of swimming by taking lessons with kids in Charlestown, or found out about his struggles to get around in a world that was not built for someone his size, including his history of bonking his head. You could hear just how much support he’s got in the reaction from the crowd at the Garden on Friday. After begging coach Brad Stevens to sub him in, fans erupted in cheers and gave him a standing ovation when Fall made his home game debut. So he’s sure to get a hero’s welcome at Symphony Hall tonight.

This is the best thing you will see all day. I promise. pic.twitter.com/leNL2oiaIc

He’ll have some, um, big shoes to fill. The 7 feet 1 inch tall Shaquille O’Neil guest-conducted the Holiday Pops back in 2010.