Seriously, What Did Sanders and Warren Say to One Another after the Debate?

Video of their post-debate chat is worth a thousand questions. 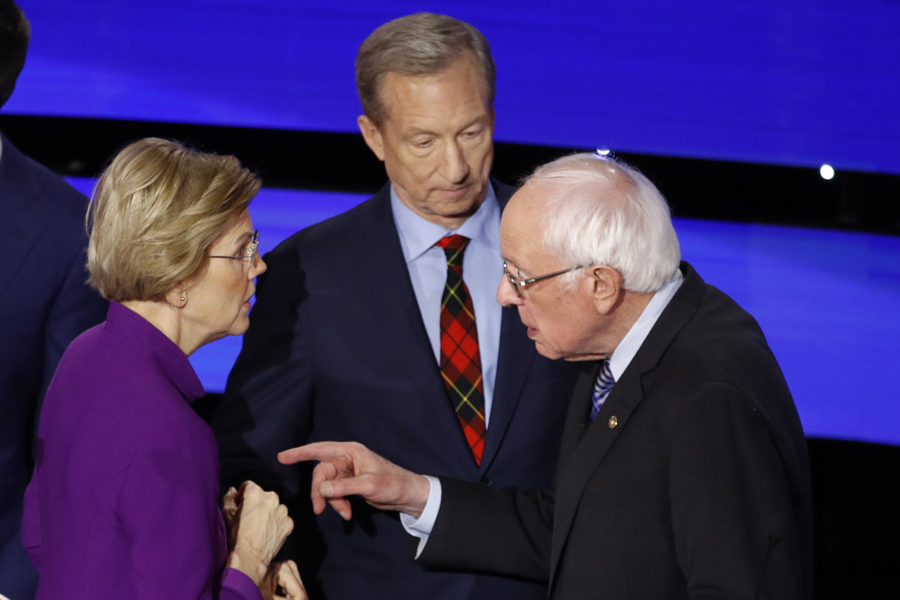 After all the on-the-record back-and-forth at last night’s debate, once the mics were turned off and CNN prepared to shift to its recap coverage, Elizabeth Warren and Bernie Sanders finally came face-to-face on stage. But if you expected them to embrace and make nice in a moment like that, maybe to signal that the two leading progressives in the Democratic primary were ready to hit the reset button after a roller coaster of a week, you would be sorely mistaken.

Video of the candidates’ exchange was brief, but it spoke volumes. Warren can be seen making her way over to Sanders, appearing to decline a handshake from the Vermont Senator. Then, while CNN’s cameras roll, the two exchange a handful of words (as Tom Steyer idles awkwardly between them), before quickly parting ways, with Sanders looking to this untrained eye a bit exasperated.

By Wednesday morning, the question remained: What, exactly, did they say?

An accurate lip-reading seems all but impossible from what I see, but it would sure be nice if someone could pull it off. After all, the spat between the two—which centers on whether Sanders told Warren he thought a woman couldn’t win the presidency—has arguably become the most radioactive of the campaign so far. Their competing versions of the 2018 meeting were once again aired at the debate, as Bernie repeated his denial of the explosive allegation, calling it “incomprehensible” he’d say such a thing, given his 30-year track record of saying the opposite, his support of efforts to recruit Warren to run against Hillary Clinton in 2016, and Clinton’s popular vote victory over Trump in that election. Warren, meanwhile, doubled down, reiterating that she “disagreed” with Sanders’ alleged 2018 remarks, then using them as a jumping off point to address questions of electability and highlight the successes of the women on stage—herself and Sen. Amy Klobuchar. “Bernie is my friend, and I am not here to try to fight with Bernie,” she said. “But look, this question about whether or not a woman can be president has been raised and it’s time for us to attack it head-on.”

It’s possible that, once the televised debate wrapped up, Warren approached Sanders in an effort to finally bury the hatchet. Both have said they continue to see one another as allies, and internal communications from Warren’s staff, obtained by Buzzfeed, appear to show a desire on her team’s part to move beyond this issue, which they don’t see as a winner for either campaign.

So maybe Sanders’ body language suggests he wasn’t on board with doing so? At least, not while millions of viewers at home were still watching them interact in real time. Maybe he took offense to the rebuffed handshake?

Don’t ask Steyer, who could be seen loitering next to the candidates while they talked. He’s claiming he didn’t hear what was discussed: “Whatever they were going on with each other, I was trying to get out of the way as fast as possible,” the billionaire has said. Thanks, Tom.

Sanders’ campaign manager Faiz Shakir offered his version of events in an interview with the Washington Post: “She came to raise a concern, and he said let’s talk about that later,” Shakir said. Sanders campaign co-chair Nina Turner, meanwhile, said that while she didn’t have the specifics on the convo, she didn’t need it to assess the exchange. “We all saw what happened at the end of the debate. The senator reached out his hand, to shake her hand, and she wouldn’t do it,” Turner said last night. “I don’t know what she said, but you can read their body language and obviously the conversation was not pleasant.”

According to my extremely amateur lip-reading, I could make out exactly two words, uttered by Sanders. “You” and “me,” which he said while pointing at Warren, and then at himself. So what exactly is the nature of the relationship between him and her right now? Some clues may be hidden in the brief, still mysterious dialogue. But the specifics, for now, are between the two of them.