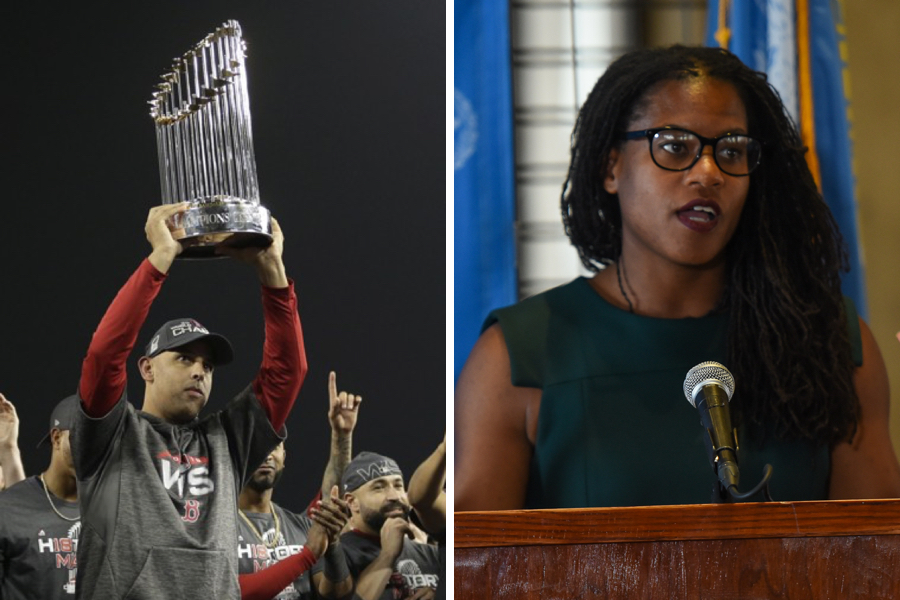 Gonna be honest with you, it’s been a little overwhelming to follow the chaos that’s taken over the MLB over the past week. There’s a lot going on, new twists are coming through by the day, and it seems like it’ll still be some time before we can all wrap our heads around the full scope of this thing.

But this much is clear: Cheating scandal or no cheating scandal, if you think you’re going to snatch the 2018 World Series trophy from the Red Sox, you’ll apparently have Boston City Councilor Lydia Edwards to deal with, and she is not playing around.

That’s the message she shared on WGBH’s Morning Edition on Thursday, responding to a pending resolution from the Los Angeles City Council calling on the league to yank the 2017 and 2018 championship titles from the Sox and Astros and award them instead to the Dodgers, in light of the league’s still-unfolding scandal surrounding sign-stealing that ensnared now-ex-Sox-manager Alex Cora.

Here’s WGBH’s transcript of what she said during her appearance (you can also listen to the clip for yourself), when asked about the L.A. resolution, which may come up for a vote any day now. The move was “cute,” she says, but back off:

“Thanks, L.A., but that was well-earned, and we’re keeping the title,” Edwards told WGBH News’ Morning Edition host Joe Mathieu. “I’m sorry if they feel any type of slight. But they lost, and they need to move on with their lives.”

“Feel free to come and try and take it,” Edwards said. “I know it’s cold, and I don’t know if they are ready for this kind of weather. But, at the end of the day, I will say on behalf of myself and I’m sure on behalf of my colleagues on the Boston City Council: from our cold, dead hands.”

The team and manager Alex Cora agreed to part ways this week after the league harshly punished Houston Astros management for sign-stealing operation, and named Cora in its report on the scheme. A review of sign-stealing dealing with the Sox is still underway. The Red Sox front office has brushed off questions about whether the scandal might result in an asterisk placed next to the team’s 2018 championship title, and urged fans to reserve judgment until the league completes its investigation into activities in Boston.

Edwards also says her fellow city councilors may draft a resolution of its own, rebutting the sore losers in L.A.