Another Promising Student Has Been Kicked Out by Customs in Boston

Shahab Dehghani, an 24-year-old Iranian Northeastern undergrad detained at Logan Airport, has already been sent back. 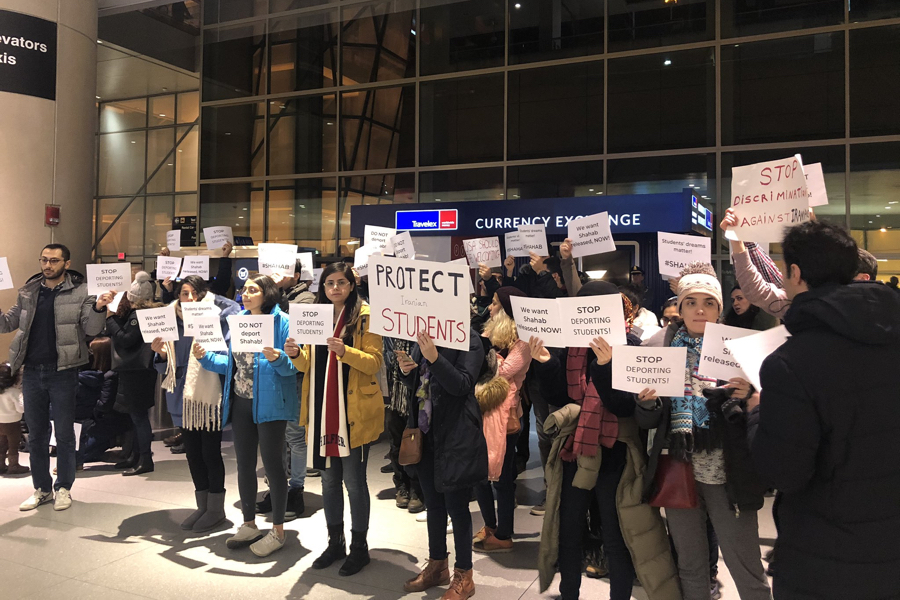 Photo of protesters at Logan Airport via ACLU/Twitter

When word got out that Mohammad Shahab Dehghani Hossein, a Northeastern student from Iran, had been ensnared by immigration authorities at Logan Airport and kept from starting his spring semester at the university, supporters quickly got to work. The ACLU launched a legal challenge, a few dozen protesters assembled, and an emergency hearing was set for Tuesday at 10 a.m.

But by morning, Dehghani was gone. The ACLU of Massachusetts confirmed that the 24-year-old had already been sent back to Iran, becoming the latest young person from abroad customs officials in Boston have sent packing. He’s the tenth Iranian student to be turned away after arriving at a U.S. airport, the ACLU says, and the seventh at Logan.

Lawyers advocating for Dehghani had hoped a federal court might be able to help, but Judge Richard Stearns dismissed the ACLU’s plea, saying the case was moot because the student has already left the country, according to WBUR’s Shannon Dooling, who was at Moakley Courthouse for the hearing.

Stearns doesn’t believe he has authority to order CBP to let Abadi return.

Determines the case moot and court is dismissed.

Dehghani landed Sunday with a student visa, according to an ACLU petition filed Monday. After he was admitted to the school, it took him nearly a year to get the travel document approved—a process that involved being interrogated at a U.S. consulate, as well as submitting to a background check—and federal officials determined he had no criminal record and did not pose a threat. Nevertheless, the ACLU writes in the document, Customs and Border Protection pulled him aside, denied him entry, revoked his visa, kept him from contacting legal counsel, and ordered him to take the next flight home. A federal judge granted a 48-hour stay on deportation Monday night. The ACLU has accused CBP of violating that order, while government attorneys said in court that by the time the order came down, Dehghani was already on a flight out of Boston.

So what exactly happened here? In a statement, CBP declined to explain the specifics of Dehghani’s case. A spokesperson explained instead that officials have to determine whether someone has met all the criteria for admission, and to revoke visas if they think someone hasn’t met those criteria.

“We are not at liberty to discuss an individual’s processing due to the Privacy Act,” a spokesperson said via email. “CBP officers are charged with enforcing not only immigration and customs laws, but they also enforce over 400 laws for 40 other agencies and have stopped thousands of violators of U.S. law. Applicants must demonstrate they are admissible into the U.S. by overcoming all grounds of inadmissibility including health-related grounds, criminality, security reasons, public charge, labor certification, illegal entrants and immigration violations, documentation requirements, and miscellaneous grounds.”

“In America, nobody is above the law—including Customs and Border Protection officials,” Carol Rose, executive director of the ACLU of Massachusetts, said in a statement. “Given the Trump administration’s xenophobic policies and CBP’s troubling practice at Logan Airport of sending students with valid visas back to Iran, it is shameful that the government defied a federal court order and deported Shahab without due process. We are looking at all options to hold CBP accountable for wrongfully deporting Iranians and other students who hold valid visas.”

“Given the Trump administration’s xenophobic policies and Logan Airport’s troubling practice of sending students back to Iran, we are deeply concerned that Shahab was detained,” Carol Rose, executive director of the ACLU of Massachusetts, said in a statement, adding that her organization will work “to ensure due process and justice for students with valid visas to come study in Massachusetts.”

The group pointed to reports of additional scrutiny for Iranians at U.S. ports of entry amid rising tensions with the Middle Eastern nation.

If any of this sounds familiar, it should. Customs officials last year caused a stir when they kicked out an incoming Palestinian Harvard student after detaining him for hours and searching his phone. Following a high-profile campaign on his behalf, he was ultimately allowed back into the U.S. to start his studies.

For now, Northeastern says it’s aware of Dehghani’s plight and is in discussions with federal authorities.

“We are aware that a Northeastern University student who is an Iranian citizen has been denied entry to the United States. Northeastern welcomes thousands of international students and supports them with an array of resources,” the university says in a statement. “We have been in touch with federal officials to learn more about this case and to provide our student with the appropriate assistance to facilitate a successful return to Northeastern.”

In the meantime, Massachusetts officials have been offering words of support to the prospective student.

.@SenMarkey office released this statement. It’s from his office that attorneys found out Abadi has been deported. pic.twitter.com/wiPWNDM8yx

Shahab Dehghani is an Iranian student with a valid F1 visa, returning to finish his education. CBP already held him overnight. His deportation must be halted, and we must fight the Trump administration's xenophobic policies. https://t.co/ZCKVo5fwvM

Turning away those who make this nation a better place is no way to govern.

This president treats every immigrant as a terrorist—that’s not what this nation was founded upon. Let him stay. https://t.co/zCuZMa7P8H