A home-security app promises to keep its users "safe and informed." Instead, it's turning us all into bad neighbors. 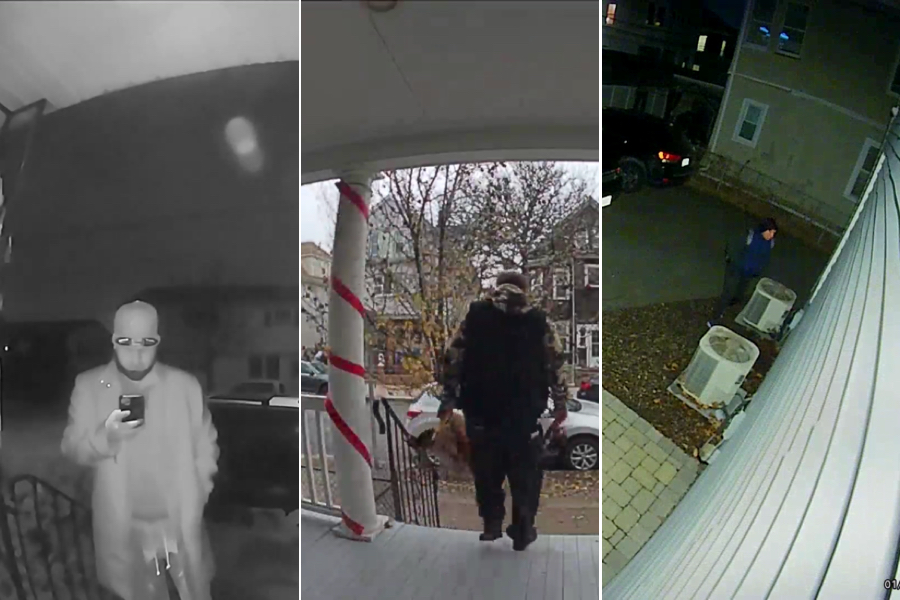 Screenshots via the Neighbors app

On a Tuesday afternoon in December, a man dressed in a camo hoodie with a shopping bag at his side walked up a set of stairs, past a pole wrapped in Christmas ribbon, and onto a porch in East Somerville. At first glance, it was hard to tell whether he was friend or foe. The stranger didn’t stay long, and didn’t do much of anything, but the instant he walked up the stairs, Amazon’s Ring doorbell home-security camera captured the uninvited guest lurking on the porch and beamed the image over to the homeowner’s smartphone. The homeowner then uploaded the footage to a neighborhood watch feature of the Ring app called Neighbors, which can also be downloaded as a standalone app. Spelled with a capital “N,” the app sounds as friendly and folksy as borrowing a cup a sugar, but would more aptly be named something akin to Busybodies or the Snitch, a place where users can, according to the company’s website, share clips of people who engage in suspicious activity or exhibit “unusual behavior.”

In this case, the Ring user titled the video “Suspicious Male,” and in no time the 30-second clip, shared anonymously, was viewed nearly 2,000 times by other local app users, including one commenter who pledged to “be on the lookout” for the potential perp. The “suspect” himself soon added a comment, mortified and eager to explain himself. He’d lived in the house a decade earlier, he wrote, and, feeling unexpected pangs of nostalgia while doing some holiday shopping in the neighborhood, decided to stop by to see how the home looked. “I used to play with my dog in the backyard,” he wrote. “I had a lot of good memories there.” Instead of indulging a walk down memory lane, though, the homeowner ended up sending the video to Somerville Police, and the video still lives online for all to see—a permanent record of a friendly visitor viewed as sinister trespasser thanks to the presence of a new technology found on an increasing number of Boston-area homes.

I know all this because I am currently obsessed with—and horrified by—the Neighbors app, a niche but growing social network that’s become a dumping ground for videos captured by Ring cameras. Boston has embraced it with gusto, despite the fact that crime statistics show that we’ve never been safer. The app touts itself as a “new neighborhood watch,” that helps users harness “the power of your community” to keep you “safe and informed.” Police are so confident in Ring’s usefulness that many departments have even partnered with Amazon to promote the product in Massachusetts. But I’ve been keeping my eye on the Neighbors app’s Boston-area posts, and it’s becoming increasingly clear that the technology is driving our community nuts, turning Bostonians into terrible neighbors—and that all of us are suddenly at risk of being publicly shamed for as little as walking down the street. Is this really what the city needs? 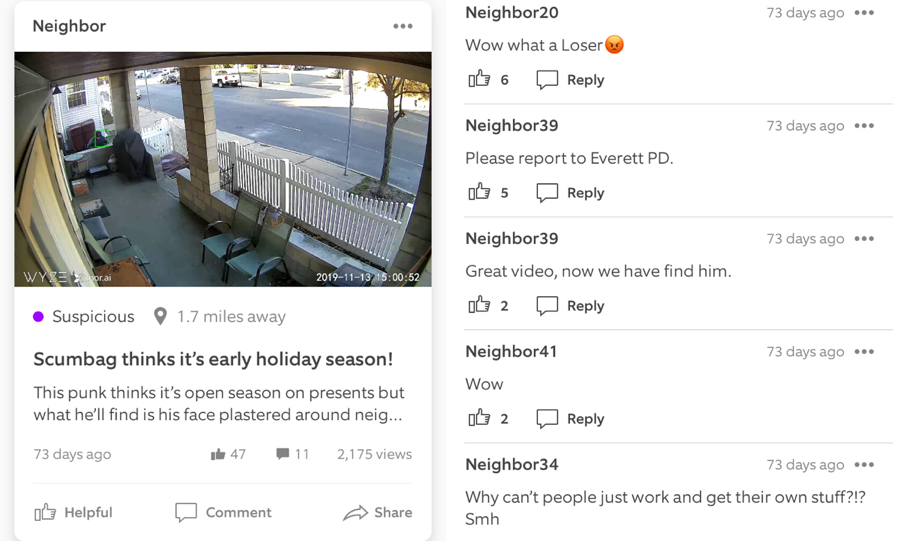 The Neighbors app was a hit here from the start. The week it launched in 2018, a news report on WBZ marveled at the technology, pointing to how one of Amazon’s Ring devices had captured video of a bicycle-riding man swiping a delivery outside a condo in Jamaica Plain. Here we had an everyday homeowner victimized by a commonplace crime using technology to fight back, collecting crystal-clear evidence and doing her neighborly duty by helping spread the word. It was like the world’s most boring vigilante revenge movie—and people loved it.

In the year and a half since, though, local users haven’t just been uploading videos of crimes in action—they’ve been using the app to post just about anything that seems mysterious or untoward. In other words, the app has become a cesspool of paranoia and aggression, where even looking suspicious is grounds for inclusion on the app’s ceaseless stream of updates. Scrolling through Neighbors recently, I found video of a man in Winthrop ducking under an awning to escape the rain ominously described as someone “Lurking on Front Pitch (sic).” I viewed delivery drivers and city workers captured on Ring cameras who were flagged as potential robbers and scammers. Ring owners have also collected videos of a young man with a backpack wandering into a backyard and then walking away, and two guys dressed in business-casual attire strolling across a driveway—none of whom appears to commit any crimes—and deemed them worthy of inclusion on the app. In fairness, many users posted clips of actual crimes, though none were more serious than a pilfered Amazon package or a fender-bender during a hit-and-run.

In a lot of cases, tensions that often simmer under the surface in Boston—specifically those around race and class—are laid bare in text on the app. People who are poor, non-white, or both are often unfairly labeled by Ring users as “dangerous.” “A lot of it is really gross,” says Kade Crockford, director of the Massachusetts ACLU’s Technology for Liberty Program, who’s also been monitoring what people are posting on the app. “I’ve seen some that are videos of homeless people finding shelter on someone’s stoop during the day, and people posting really just derogatory, heartless, cruel things about these folks who are obviously at a really low place in their lives, struggling with substance abuse and poverty. That is deeply troubling to me.” Asked about how the company separates useful information from frivolous or race-based fear-mongering, an Amazon spokesman said that moderators are trained to find and delete any post that violates “policies against racial profiling and prohibiting hate speech or other forms of prejudice before it goes live on the platform,” adding, “We take this very seriously and have invested many resources, tools, and human power to ensure we uphold a standard of trust and civility.” 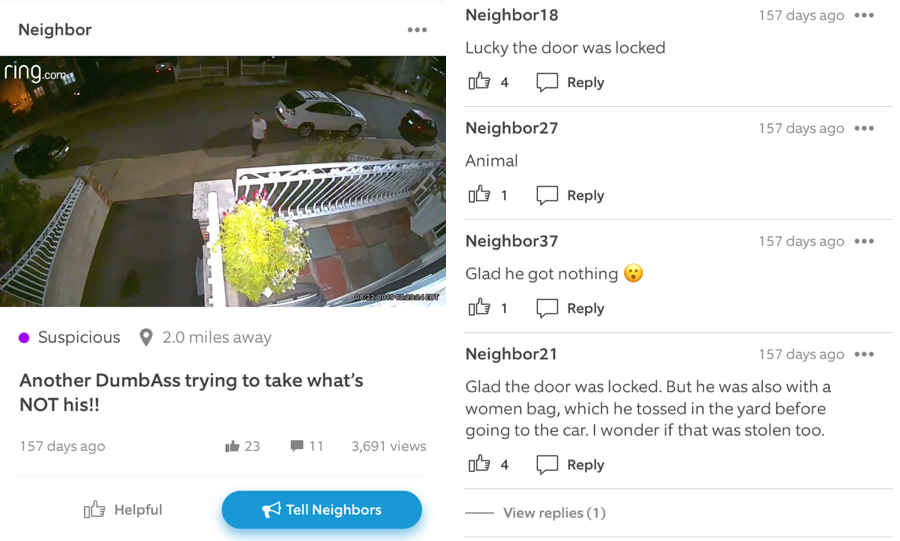 Many of the posts on the app bring out the worst in their fellow neighbors. A quick scroll through the comments reveal users suggesting that homeowners become vigilante detectives, devise elaborate schemes involving GPS trackers, or leave packages filled with dog poop. A commenter in one video of an apparent package theft recognized the perpetrator and revealed which neighborhood bar the suspect frequents. Despite Neighbors app guidelines that users are not to “use crude, inappropriate or insulting language” or “promote or encourage violence or vigilantism,” look long enough and you’ll find explicit threats. “I am so sick of these guys. If I catch one they are going straight to the hospital,” one commenter on a video of a package theft in the North End writes. “So cmon (sic) my property. I am going to really hurt you bad if you do.”

Don’t get me wrong: There are countless examples of the benefits of the Neighbors app, including identifying hit-and-run drivers, helping to find lost pets, or, in one case, providing crucial evidence of a kidnapping underway in Las Vegas. Still, a review of the videos on Boston’s section of the Neighbors app reveals many doorstep moments aren’t even crimes at all. The unintended result, though, is a growing army of Bostonians who have engineered a vast network of private surveillance cameras and unwittingly volunteered their services to broadcast anyone who steps near their front door. It’s certainly possible that this will make crooks less keen to steal loose items from your front steps, but is Boston truly a better place if neighbors are constantly on edge about people passing by, or worried they’ll see their face plastered across the Neighbors app for no good reason? I’m all for technology and keeping your castle safe, but geez, can’t a guy just stop by to say hello anymore?