Who Gets to Fake the Boston Accent?

The Super Bowl ad starring Bay Staters Rachel Dratch, Chris Evans, John Krasinski—along with Big Papi, and a smaht cah that pahks itself—puts the hometown brogue back in the spotlight. But if you’re going to use a Boston accent, you’ve got to play by the rules. 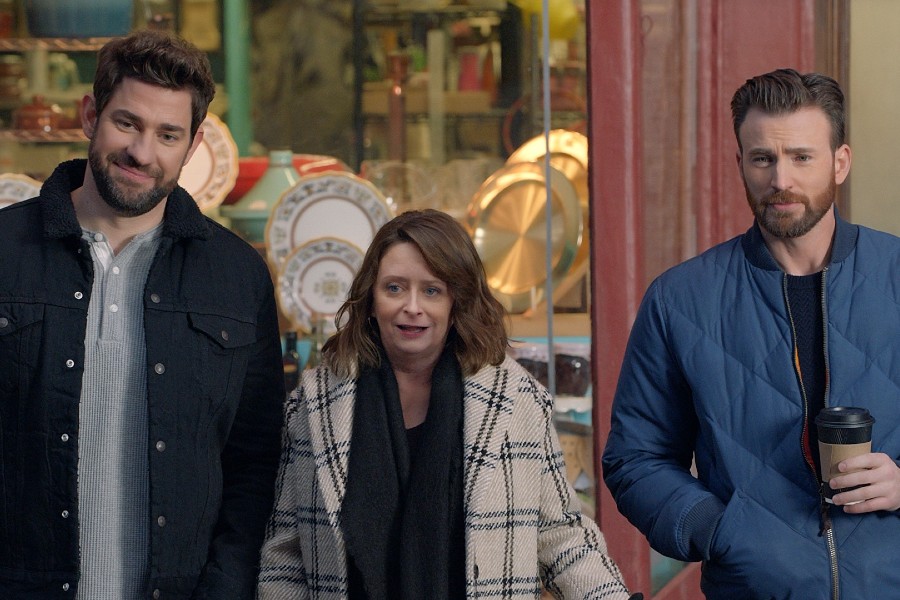 Easily one of the most embarrassing things I did when I was at college in Maine was that I’d start talking in a fake Boston accent when my roommate and I would go to our local bar to watch Pats games. I grew up on Martha’s Vineyard (a townie, for the record) and my roommate had grown up in Brookline, but here we were—me in a paint-splotched Red Sox hat from my summer job—in the full embrace of a Boston identity that I, for one, had absorbed almost entirely through pop culture. (Boston via Hollywood, baby!) Our third roommate, who was from New Jersey, absolutely hated when we came back from the bar still yelling in Boston accents and would leave the room until, inevitably, she’d come back and tell us to shut up because it was 2 a.m. and what in the love of Christ on a bicycle was wrong with us anyway.

I mention this story because, once again, the Boston accent seems to be taking center stage. Specifically, Chris Evans (Sudbury), John Krasinski (Newton), and Rachel Dratch (Lexington) are starring in a Super Bowl commercial for Hyundai premised on the pahking of cahs—or more to the point, cahs that pahk themselves, because they’re wicked smaht. It’s a corporate love letter to a city that pretty much expected to see an ageless Tom Brady win another Super Bowl, and so far in general, local viewers seem to like it, even though fans have complained that Dratch misuses the word “wicked.” But the ad spot also brings up a question: For a town that can be militant about policing insider-outsider status, what are the rules for who gets to fake the accent?

As a Baystater, but not a Boston-area native, I didn’t feel qualified to definitively answer this question. So, I set out to poll a cross-section of Bostonians gathered in the bars around TD Garden to watch Thursday’s Celtics game. I began at Sullivan’s Tap.

The first and most important rule for who gets to use the Boston accent, my bar room experts explained, was fidelity and attention to detail. Chris Thompson from Swampscott (which is mentioned in the ad) said that even though he thought Dratch was the only one who did the accent right, the real issue was the script—not the performances. “They used ‘wicked’ completely inappropriately. It’s an intensifier,” he said, upset that the Hyundai commercial got it wrong. “They got the actors,” he added, “but I feel like all of them should have said ‘No’ once they saw the script.” (The script writer has in fact apologized for this grievous oversight.) Thompson’s point, though, is that if you’re going to do the historically local accent, don’t mess it up. Or, as one middle-aged gent with an excellent Boston accent argued later on in the night, praising actor Johnny Depp’s accent playing Whitey Bulger in Black Mass, “It doesn’t matter where you’re from, so long as you do it right.”

The next group of C’s fans I approached argued for a second rule: If you’re from Massachusetts, you get a little leeway. The accents in the ad were overdone, they agreed, but as one person in the group explained, “They’re all overdoing it on purpose, but it’s okay because they’re from here.” On the other hand, he argues, the accents in Showtime’s City on a Hill “were f***ing offensive,” in part because it wasn’t Mass natives who were doing the butchering. Under this rule, my use of an accent in college was permissible—which was comforting to hear.

The rules, however, aren’t exactly codified. When I walked into McGann’s Irish pub, two friends from Lawrence (who have very good accents, by the way) landed on different sides of the question of just how much slack a native should really receive. “Actors always over-play it,” the purist of the two said, and while they focus on dropping ‘r’s, “they always forget to add the f***ing ‘r’s. [Note: Think sodar and pizzar for soda and pizza.] The bottom line is that that f***ing accent sucks, because it’s not real.” His buddy, who loves the Hyundai ad, shot back, “Captain America, he’s from Sudbury: That’s fine. That’s f***ing Town.” That, the purist argued, only raises the bar, because anyone from here should know enough to nail it. (This devolved into an argument about whether Casey Affleck’s Dunkin’ Guy was overdoing it or was “just some guy from Quincy.”)

Why is any of this important? For one thing, it’s because Boston accents are disappearing. “It used to be people really didn’t move from their area,” says Marjorie Feinstein-Whittaker, a local speech pathologist “Everyone talked the same way and it was ingrained.” Today, though, as neighborhoods have become increasingly diverse and people are more mobile and more influenced by media with neutral accents, regional differences everywhere are fading. The Boston accent, Feinstein-Whitaker says, “has been diluted just by the natural changes occurring in the city.” Some clients come to her, she says, to learn to adopt a more neutral accent when they feel they’re not being taken seriously at work or are misunderstood by colleagues from elsewhere.

At the same time, many people—including Angela Peri, one of the owners of Boston Casting Inc, the casting agent on the Hyundai commercial—argue that the Boston accent is an essential part of our local identity and worth preserving. “It identifies who we are,” she says. “We’re not as brash as New Yorkers. We’re not like people from Los Angeles, where nobody’s really from there. We’re authentic people with heart and soul, and we tell it like it is.” After all, the accent is really a character, too. Dratch hammed it up in the old SNL “Boston Teens” sketch with Jimmy Fallon, when they screamed “NOMAH” as much as possible. New Hampshire boy Seth Meyers performed a whole montage of accents in his “Boston Accent” sketch on Late Night with Seth Meyers. Casey Affleck pretty much nailed it with his Dunkin’ Guy sketch on SNL. Just like the “Bert and I” records of the 1950s and 60s—made by two New Yorkers, Marshall Dodge and Englishman Robert Bryan—which captured a certain brand of Down East culture, the Boston accent will certainly live on. And it’s worth fighting over just what that memory should look, err, sound like.

In the end, though, I discovered that the rules for who gets to fake the Boston accent are pretty simple: “It depends on who is doing it,” said a Gloucester man who works in the fish business. “And if we don’t like ‘em, then they can’t f***ing do it.” Words so true, they might as well be the hometown motto.

An earlier version of this piece misstated where Robert Bryan is from. He’s from New York, not England.