What Will Pats Fans Do If Tom Brady Really Leaves?

Our record-smashing QB is about to be a free agent and appears to be flirting with other cities. Could Pats fans ever forgive him? 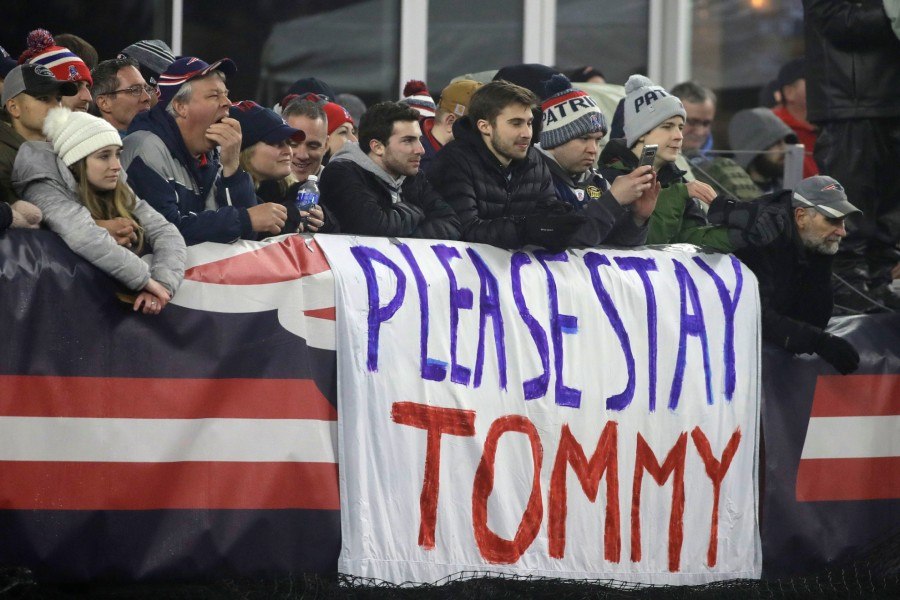 For some Patriots fans, goodwill apparently only lasts as long as a 30-second Hulu ad. Ever since the spot first aired in the first quarter of Super Bowl LIV, during which Tom Brady walks to midfield and says that, unlike “TV as you know it,” he “isn’t going anywhere,” the New England faithful have been trying to decipher the intentionally provocative message. Though Brady won’t officially become a free agent until March, the speculation game is already in full swing, and fans are preparing themselves for anything. Sure, Boston will forever be indebted to the GOAT for his six Super Bowl wins, but who’s to say whether that feeling will survive the shock of, say, seeing Brady in a Raiders jersey? After all, as with any breakup, it matters who walks away. If our sacred QB finds a new home to finish his career, will Pats fans wish him well? Or will they end up rioting in front of TB12 stores and burning No. 12 jerseys all over town?

In an effort to find out, I polled Patriots Nation on Twitter. And if you take fans at their word, most say they’ll support Brady no matter how this free agency saga turns out. I was surprised to learn that out of the 31 responses I received—via replies, direct messages and phone calls—19 offered unequivocal support for Brady. “He’s taken a discount here forever,” says Brian Zarthar of Milton, speaking for the masses. “If all things being equal and it comes out the Patriots offered him $30 million and the Raiders offer him $30 million and the Cowboys offer him $30 million and he went somewhere else because they have better weapons and he wants to win, I wouldn’t be mad.”

Hearts are fickle, though, and as a passionate bunch, New Englanders are prone to changing their minds. A recent public flirtation with Raiders owner Mark Davis, for instance, doesn’t sit well with lifelong Patriots fans such as Teddy Cummings from Barrington, Rhode Island. “I always feel like he portrays himself as ‘for the team,’ and that he’s willing to sacrifice himself for the team,” Cummings says. “But then, he does the Hulu commercial, for example. He’s totally rebranding himself, not for the team but for himself. He’s basically trolling people.” And while Southie resident Garrett Finn is waiting to cast judgment, he says it would be difficult to forgive Brady for leaving. “I would have hard feelings,” he says, “because I think it would be extremely weird for him to do that to a fan base that has literally worshipped him.”

At the same time, there’s also a third contingency of fans who are just sick of the years-long saga. “To me, it’s frustrating,” says Colin Tiernan, a Cape native. “I watched all of the games last year, and I’m tired of it. I want an answer, and I’m sure the rest of New England wants an answer.” Jennifer Mullen of Falmouth agrees. After all, if Belichick has taught us anything so far, professional football is a business, and sometimes it’s time for the Next Man Up. “Everyone wants to know, ‘Is this the last year? Is this the last year?’” she says. “Then you get sick of hearing it. If he leaves, he leaves. In a way, you kind of want it to be over.”