Residents of the Roxbury neighborhood are optimistic about the early impact of the new title, and the difference they hope it will make. 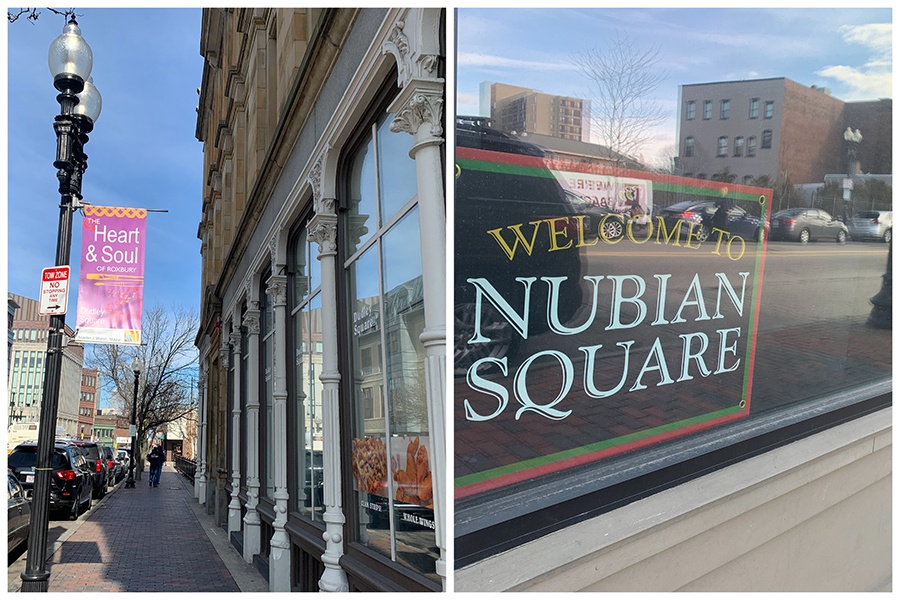 When I plug my destination into Google Maps on the first sunny winter day all week to check how long until my bus will arrive, it’s impossible to resist stretching my fingers across the screen of my phone and zooming in to see the new name that now hovers over a central stretch of Roxbury: Nubian Square. Pale gray letters stake their claim in all caps, lending the Google stamp of approval to a more than five-year community effort to rename the erstwhile Dudley Square. It was a long process, which traveled through a non-binding city vote (unsupported by Boston on the whole, but widely supported by Roxbury residents), a unanimous vote by the city’s Public Improvement Commission, and eventually, a quiet edit to Boston’s book of streets. Almost two months after the birth of Nubian Square, I wanted to see how the residents of the neighborhood were settling into its new name.

I start the morning with a coffee from Haley House, a Nubian Square bakery and community hub that, after a yearlong hiatus, reopened within weeks of the official name change approval on December 19. General manager Misha Thomas seems optimistic about the promise of change in the air. She points to the MFA’s recent Ancient Nubia Now exhibit and the square’s official name change as examples, calling them “a public recognition of black people in a different light, and with a history before slavery.”

Thomas sees the change as the city’s government finally acknowledging the conflict between the name of the area and its primary residents. “The name of the space is being changed to honor the people that live here. It’s a huge deal,” she says, framed by the stunning black-and-white portraits of black Bostonians that decorate the revamped space. And while she says it’s hard for her to put her finger on what has exactly changed, she’s already noticed a difference in how the square feels. “It’s a little different of a vibe. There’s a lot more pride behind it.” 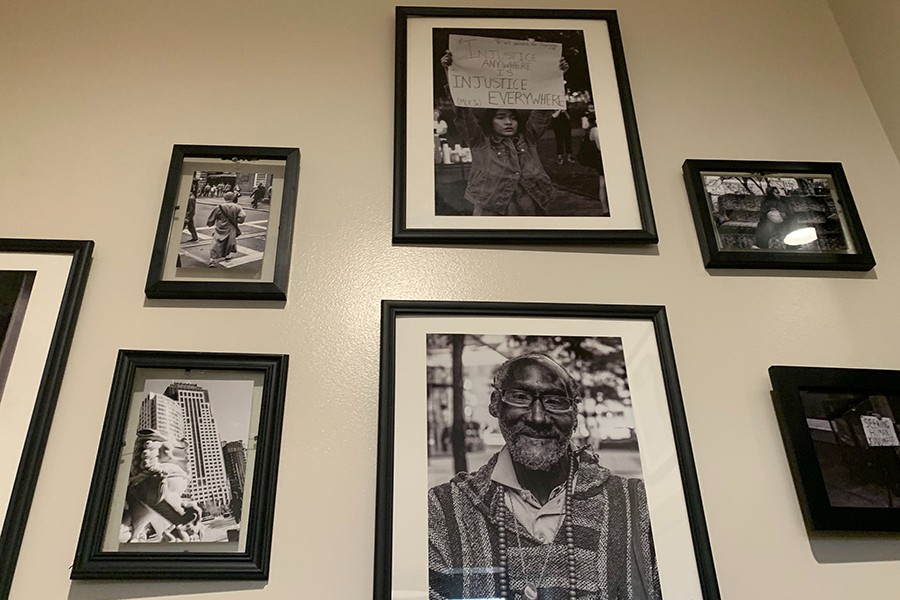 Part of photographer Jourdan Christopher’s series “Strangers in Boston” is on display at Haley House. / Photo by Sofia Rivera

Still, Thomas says that as encouraged as she was to see the name change approved, she was just as frustrated by the response from the rest of the city. When a 54 percent majority of Boston voters opposed the non-binding ballot question back in November, she was annoyed but unsurprised. The results, and the comments under the articles that followed, only “echoed the issues the city has had for years,” she says.

That’s the hard part. It’s one thing to acknowledge the grievous injustices of our history, events we can separate ourselves from with time and a generation or three of distance. It’s another to come to terms with the mistakes we’re making today, and how we’re reckoning with the troubling legacies of the prominent people we’ve unquestioningly chosen to honor across the city for years.

While the renaming may have been long in coming, it’s hard to argue with the interest in changing it. There’s no evidence indicating the square’s former namesake Thomas Dudley owned slaves himself, but he was governor in 1641 when Massachusetts legalized slavery, becoming the first colony to do so. “For almost six years we’ve been on a mission to have the name taken down, because we felt it was a contradiction to have the name of a slave-supporting family on our primary commercial district,” says Sadiki Kambon, chair of the Nubian Square Coalition and director of the Black Community Information Center, which led the charge to change the square’s name. After all, he and others often wondered, how could a major business district in a historically black neighborhood be expected to thrive when its name honored the oppression of black people?

This isn’t the first time Roxbury has erased the Dudley name from its streets. In the ’90s, Kambon also guided the effort to rename New Dudley Street, which is now called Malcolm X Boulevard, and Washington Park, now Malcolm X Park, both named for the Civil Rights leader who once lived in the neighborhood.

And in the case of Dudley Square, Kambon felt that the impact of striking a name that represented a history hostile to the community’s largely black population from the entire square would be major. The next step was finding a title that would better suit the square. Nubian Square did that in two ways: First, it commemorated A Nubian Notion, the beloved family-run gift and convenience shop that stood as a welcoming centerpiece at the corner of Dudley and Warren streets for nearly five decades before closing in 2017. And second, it invoked the power of ancient Nubia, the Sudanese Nile Valley where some of Africa’s first empires flourished for more than 3,000 years.

When I walk into Final Touch, a clothing boutique right next to Dudley Station (the MBTA stop hasn’t been officially renamed yet), owner Danny Hardaway apologizes if things look a little messy. He just returned from what he calls a “safari,” a trip to various U.S. cities looking for exciting new pieces and designers to bring back to his store. He’s confident that in a handful of years, Nubian Square “is going to be downtown,” but it needs its younger residents to come back to the community and open up their businesses there. “It takes a village to raise a family, and this is our village and the people really care,” he says. “We’ve come a long way, and the family is growing.”

My next stop is Frugal Bookstore, which has been in Roxbury for eight years. After browsing the shelves, I ask co-owner Clarrissa Cropper, who voted in favor of the name change, if she thinks Nubian Square could help bring in those vital new businesses. “I hope so,” she says after a pause. “With change, new things come and we don’t know what it’s going to bring. But we hope it’s for the better.”

Intertwined with the hope of the newly named square, though, is the very real fear that developers will see dollar signs in its revitalization—and the knowledge that no name has the power to ward off unwanted development on its own. “A name can’t fix gentrification, because that’s a zoning and policy change,” Thomas says. “But it has made people wake up and want to fight for what they have.”

It’s true that a name change alone won’t populate the vacant storefronts that are easy to find around the square, or transform the neighborhood back into the place those who grew up there remember: a downtown full of options, where the stores were filled, the Woolworth’s was always busy, and you didn’t have to leave the neighborhood for anything. And even an influx of minority-owned businesses doesn’t guarantee protection, particularly in a city where property prices rise by the day and shiny developments plop down in historic neighborhoods all the time. But the sense of stability a new identity will usher in, as Kambon hopes, could make it more difficult to dismantle. That, he says, was the third goal of the name change: “We want to send a strong message out there to the forces of gentrification. We’re going to fight for the land that we reside on.”

Some Nubian Square business owners and Roxbury residents I spoke to said it’s just too early to tell what kind of tangible difference the name change will have, beyond a symbolic reclamation of the community’s culture. People are still getting used to the name, and even though there are several red, green, and black “Nubian Square” signs on fences and storefronts in the area, “Dudley Square” banners still fly from the lampposts. When I grab lunch at bustling Dudley Cafe, choosing between options such as the Malcolm X sandwich and Frida’s rice bowl, and listening to patrons tap out tunes on the communal piano, the manager says the café may update its name in the future, but it’s too soon to consider now.

The square’s name change is just the first stage in reclaiming the neighborhood’s identity. Kambon says it’s part of a trifecta—they’re also working to remove the moniker from the public library branch, which is currently closed for renovations, and the MBTA station. Last Friday, the MBTA announced that they will begin the process of changing signage and schedules associated with Dudley Station to Nubian Station, and a spokesperson for the Boston Public Library’s Board of Trustees says that while no decision has been made on the renaming of the library, they’ll be scheduling a community meeting in the coming months “to update Roxbury residents about several aspects of the 2020 reopening.” The Small Business Unit, which is part of the Mayor’s Office of Economic Development, has said that while they don’t represent individual businesses, “Our technical assistance and design service programs are available to small businesses in Nubian Square if they would like assistance in rebranding from ‘Dudley’ to ‘Nubian’.” 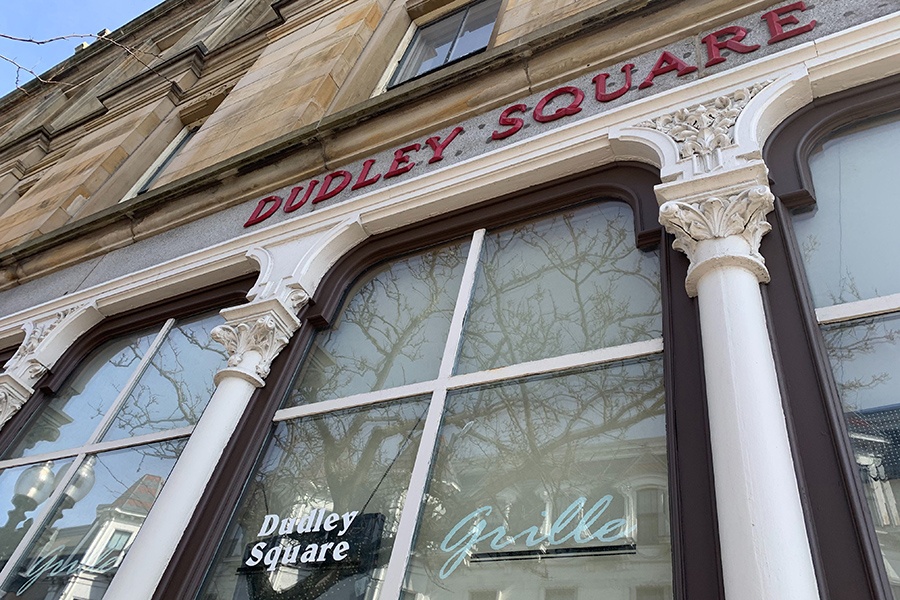 In the meantime, Nubian Square will be growing into the new name it’s claimed for itself, blossoming into an even more interesting, robust neighborhood, and making Boston all the better for it.

There’s a lot of hope, Kambon says, but “the work has just begun.”