Go Ahead, Take a Museum Selfie

Don't let anyone make you feel self-conscious about posting your pics from the new MassArt museum on Instagram. 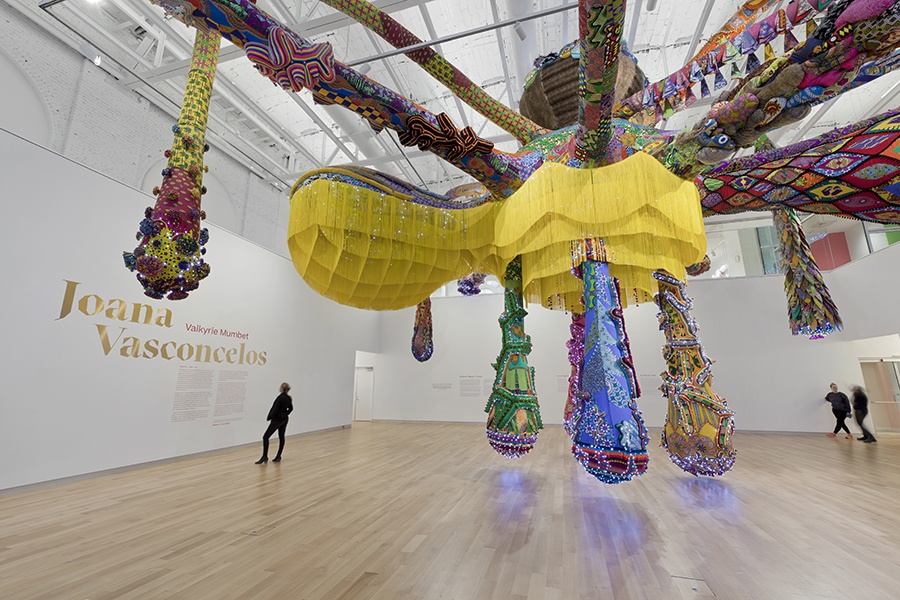 If you visit the MassArt Art Museum when it opens its doors for the first time February 22, you’ll have a choice to make: Should you first travel upstairs to see Portuguese artist Joana Vasconcelos’ spectacularly massive textile sculpture, a tentacled blob of silk, linen, beads, and lights suspended from the 37-foot ceiling? Or should you make a beeline for the downstairs gallery, where you can strap on a VR headset and embed yourself in the Game Changers exhibit, an exploration of contemporary art and video games? Either way, you’d be remiss not to snap a photo or two—that’s what museums are for, right?

In recent years, art institutions across the city have hosted more and more exhibitions like the inaugural lineup at MAAM, which encourage viewers not only to look, but to pose or participate, post, and share. Four years ago, we couldn’t stop taking photos in front of the inflatable Breathing Flower that lived on the MFA’s lawn. This summer, graffiti artist Vanessa Platacis created a space in the Peabody Essex Museum’s new wing that encourages visitors to photograph themselves in front of the dreamily stenciled walls. And when the ICA introduced Yayoi Kusama’s psychedelic forest of polka dots and mirrors Love Is Calling early this past fall, the first batch of tickets sold out almost immediately, and photos in the exhibit began to dominate the museum’s geotag. “The contemporary viewing audience wants evidence of having experienced culture,” says Kirsten Swenson, an associate professor of art history at UMass Lowell.

That evidence often comes in the form of social media posts—artsy shots of us in front of larger-than-life murals and giant lotuses, showing our followers that we’re smart, cultured, connected to the city, and fun. It’s a near-universal experience (who doesn’t have a mirror selfie at Love Is Calling yet?), but as you watch people queue up to stage their perfect shots in front of the latest content-worthy art installation, it’s hard not to wonder: Is something lost when we look at art primarily through the lenses of our iPhones? 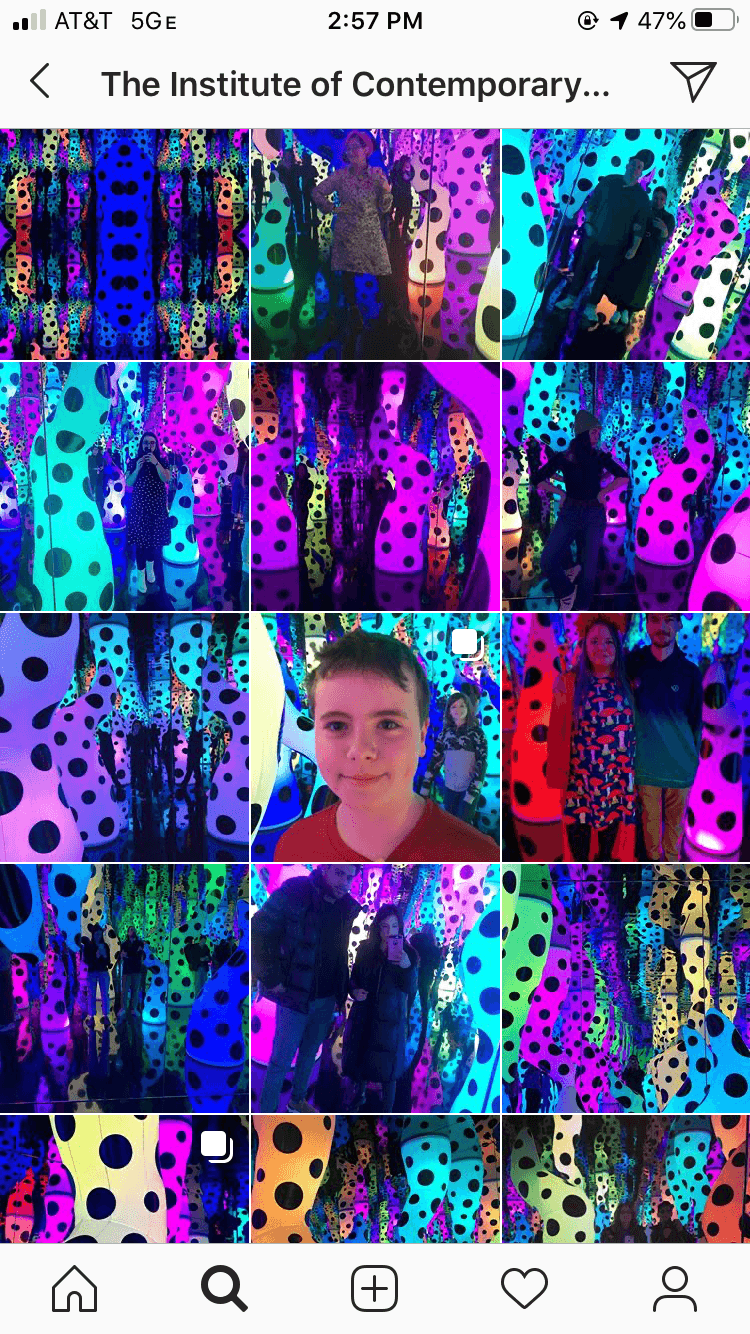 Recent photos geotagged at the Institute of Contemporary Art.

In 2013, Harvard art professor Jennifer Roberts penned a now-well-known essay for Harvard Magazine about an assignment she gave out in all of her art history courses: To go to a museum, find a painting, and look at it for three hours. The idea is that vision is not instantaneous—that it takes a lot of time to uncover what an artwork has to offer. “What this exercise shows students is that just because you have looked at something doesn’t mean that you have seen it,” she wrote.

Critics have long bemoaned that social media works against this type of deep looking, putting up a superficial barrier between us and whatever it is we’re looking at. Every Instagram user has been nagged that focusing on getting the perfect photo impedes our ability to fully partake in the artwork (or vacation, or concert, or meal) in front of us. In other words: When we’re focused on getting the light to hit us just right as we pose in front of Katharina Grosse’s giant, kaleidoscopic mural at the MFA, we’re not exactly interrogating the work’s brushstrokes and use of color.

Nevertheless, our local institutions seem to be playing in to our hunger for followers and double-taps. Many of the city’s most popular exhibitions in recent years have been immersive artworks that satisfy our desire to photograph. Sometimes, these exhibitions are participatory, like Kusama’s Love Is Calling or another recent ICA exhibit, William Forsythe’s Choreographic Objects, which involved a series of objects you could climb up, over, and through (all while your friends snapped photos of you). Other times, they’re simply showstoppingly large or colorful, like the MFA’s current Mural exhibition, which features both the Grosse piece and a massive Jackson Pollock mural.

It’s a necessary shift: While Boston’s abundance of students will always generate an audience for Egyptian relics and Greek sculpture, drawing recreational visitors, many of whom are now millennials or younger, is now a different story for local museums. “In the early aughts, museums began recognizing that they needed to embrace spectacle to draw crowds,” Swenson says. Gone are the days when audiences were satisfied with smudgy water lilies and hoary portraits, she says—instead, “there needs to be something viral about the work that can be taken away.”

It’s a trend that has exploded as social media has become more ubiquitous. A photo with John Singleton Copley’s portrait of Paul Revere might get a handful of likes and a comment from your dad, but a moody shot in front of a Rothko or a video of you jumping into Mass MoCA’s A Cold Hole is bound to do much better numbers. In a world where our vacations, meals, and outfits are increasingly curated for Instagram, it’s only natural that we want our museum visits to follow suit. Which is, of course, a wholly unromantic thought—the idea that we’re all just Instagram zombies, training our iPhones around art galleries in search of the shot that’ll go viral.

But Lisa Tung, MAAM’s executive director, is slow to judge. “People experience things in different ways,” she says. “Far be it for me to say that you can’t have the same experience if you have a phone or camera up to your face.” MAAM, in fact, even encourages photo taking and sharing by including social media handles and hashtags on exhibit signage. Tung says she would never bring an exhibit to MAAM specifically because of its appeal to photographers (though the museum’s bathrooms have been optimized for mirror selfies, she told me mysteriously). However, in the confusing, challenging, and sometimes off-putting world of contemporary art, Tung says, taking and sharing photos can often be an approachable entry point into a work.

Many experts in the field agree: Using an art museum as an Instagram background doesn’t cheapen the experience of museumgoing. It’s simply a different form of engagement. “Certain works of art and certain galleries are bringing in audiences who might not ordinarily engage with the work until they can with their phones or their cameras,” says Jared Bowen, WBGH’s executive arts editor. To imply that that’s an inappropriate way to interact with art, he says, is “elitist”: “It suggests that there are certain people who don’t belong in a museum, and I absolutely don’t agree with that.”

Museums, of course, also reap benefits from patrons sharing photos online. Content isn’t just the proof of a museum visit—it can also be the impetus for one. In an era where there are plenty of things trying to capture our attention, and a city where we don’t love leaving our houses, social media hype has become an important way for art institutions to get bodies through their doors. After all, looking at your friends’ photos from Love Is Calling might show you what the room looks like, but it doesn’t capture the experience of attendance. You might, however, feel spurred to make the trip and see it for yourself.

“It’s important to remember [Kusama’s] Infinity Mirror rooms are all analog,” says Eva Respini, the Barbara Lee Chief Curator at the ICA. “The physicality of that experience of being in the room can’t really be reproduced.” Vanessa Platacis, the artist behind PEM’s Taking Place exhibition, feels similarly. She encourages visitors to take and share photos with followers because they serve as “a call to action—to experience it for yourself.”

Our current spectacular art experiences look pretty different from traditional portrait galleries, and the iPhone-toting museumgoers of today look pretty different from the beret-sporting, black-turtlenecked crowds of yore. But it’s hard to have harsh feelings about exhibitions that drum up excitement, and people finally feeling motivated to take their first steps into our local cultural institutions. More people looking at art—even if it’s through the lens of a camera or in their social media feeds—is probably a very good thing.