A national treasure or an overrated pebble? During the year of the 400th anniversary of the Pilgrims’ landing, it's all in the eyes of the reviewer. 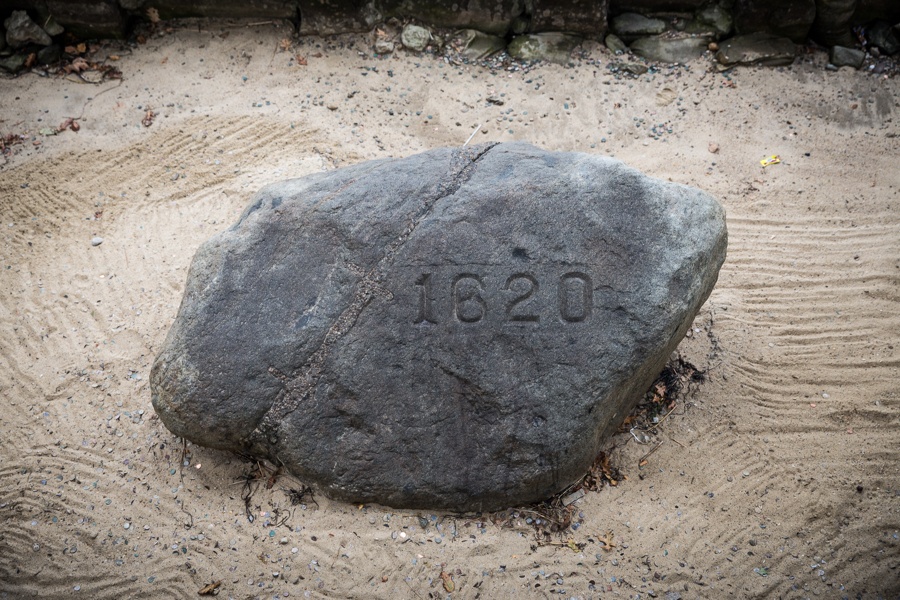 For many history buffs and local lore aficionados, Plymouth Rock is hallowed ground. Each year it attracts more than a million visitors, all eager to lay eyes on a slice of American history as beloved and mythologized as Paul Revere’s ride and the “whites of their eyes.” Recently, after a brazen graffiti artist decided to tag the landmark over Presidents Day weekend, people around the country sounded their outrage over this attack on a piece of Americana: There’s now a GoFundMe campaign to help find the culprit, the New York Times wrote about the seaside community’s grief, and Fox News story tossed this tasty morsel of Founding Fathers-disrespecting red meat to its viewers. The graffiti was promptly cleaned up (it’s apparently tagged several times a year) but given the upcoming 400th Anniversary of the Mayflower’s arrival, the incident struck a nerve with adoring fans.

Not everyone, though, feels quite that much passion for the iconic rock. In fact, legions of Yelp users have made pilgrimages of their own to see the landmark, resoundingly declared, “meh,” and delivered one- and two-star reviews on the app. Just what about the beloved landmark falls short varies from one reviewer to the next. Some find its origin story unbelievable. Others deem it frustratingly small. A lot of people just want to touch it. (You’re not allowed to touch it.) This year’s quadrennial celebration of the Pilgrims’ arrival in the New World or not, these are the online commenters who wouldn’t care if you tossed Plymouth Rock off the Mayflower II, and don’t mind saying blasphemous—and, occasionally, uncomfortably true—things about the sacred boulder. Here’s what Plymouth Rock’s toughest audience had to say:

Plymouth Rock is too small

Many who laid eyes on the rock have felt betrayed by its size, because despite its hundreds of years of acclaim, the thing is in reality only a few feet across. That became painfully clear to Nikky B., of Weston. “They should call it Plymouth pebble,” she writes, adding that she was “appalled” at the sight, and fumes, “If I could give this rock zero stars I would.” Says Ritza A., of Houston, “I guess small dick syndrome was one of the many diseases the Pilgrims brought over to the new world,” although, she adds, “It’s still worth the stop if you’re driving through to Cape Cod.”

Its legend is a lie

It’s so small, in fact, that viewers start to notice immediately that something is up with this beloved landmark. “I highly doubt when the Pilgrims approached land for the first time after being at sea for months, they lassoed to this pebble with joy and excitement!” writes Denise S., of Seattle. “This rock is smaller than my dog’s bed.”

They’ve got a point. Historians agree that it’s highly unlikely the Pilgrims disembarked on the rock, and the story that they did only really took off more than 120 years later. As for its size, fame eventually got the better of the rock, as visitors chipped chunks off of it for years. It’s now believed to be a third of its original size.

To preserve what’s left of the rock, preservationists have separated the untrustworthy masses from the object with a wrought-iron fence, which guards a pit surrounded by the stone shrine built to house the rock in unmolested solitude. Which is apparently a bit of a let-down for many who visit. “You can’t even touch the rock,” writes Miguel A., who lists his hometown on the app as Plymouth.

Other Yelpers took issue with the uncomfortable truth that the Pilgrims’ arrival in the New World wasn’t exactly great for the people who lived here before they did, and suffered immensely from the disease and conflict the Europeans brought to the continent. “Plymoth [sic] Rock is a despicable, distasteful, embarrassing seagull target that celebrates the genocidal inception of white europeans conquest of North America,” writes Casey E., of Haverhill.

Some commenters seemed deflated by the cold, hard reality that many of the rocks we’ve arbitrarily decided are important—the Blarney Stone, and so on—are, when you see them, still just rocks. “It’s a rock,” writes someone named Yelp U., from Highland Park, Illinois. “With numbers on it. Just Google ‘rocks’ and you will see the same exact thing as what you see here.” Adds one Londoner named Matthew E.: “It’s a rock alright.” “Well,” writes Brad M. of Yukon, Oregon, “There it was.”
Read Brad M.‘s review of Plymouth Rock on Yelp

Plymouth Rock is in New England, where it’s cold sometimes.

“Tooo Cold and windy on Thanksgiving,” warned one commenter, who visited in 2018. What the local tourism board is supposed to do about that is unclear.

Even those with local cred take issue with the rock. One commenter, Dawn E. of Marlborough, claimed to have had a summer job waiting tables in the Plymouth community and could gauge how well tourists would tip depending on whether they’d seen the rock yet—they were apparently a lot less likely to be feeling generous about contributing to the local economy if they had.

Plymouth Rock is… all kinds of wrong for this guy

My favorite review is probably this one, which is a real journey, hits a lot of the major themes here, and needs to be read in full.
Read Tres M.‘s review of Plymouth Rock on Yelp

To recap: It’s a tourist trap, the snack options aren’t even good, there’s that genocide issue, and I wish I could touch it.

Still, there are two sides to the Plymouth Rock Yelp review coin, as exemplified by the destination’s okay, but not great, average rating of 3.5 stars. There are plenty of reviewers who are compelled to defend the rock’s honor. “1 and 2 star reviews? Wow! Tough crowd!” writes Donald, of Virginia, whose Yelp avatar is a picture of himself at the White House. “How can you not like a veritable piece of Americana that is literally tied to the origins of the United States of America?” He and 36 others gave the rock 5 stars.

You can’t please everybody, I guess, but you’ll always have the superfans willing to peer over the railing at this small piece of history, and think wistfully of the Pilgrims and their transatlantic voyage. And maybe that’s enough.