Why Boston Is Getting Too Bright

Development is flooding once-dark skies with light pollution, messing with our internal clocks—and turning Boston into the city that doesn’t sleep well. 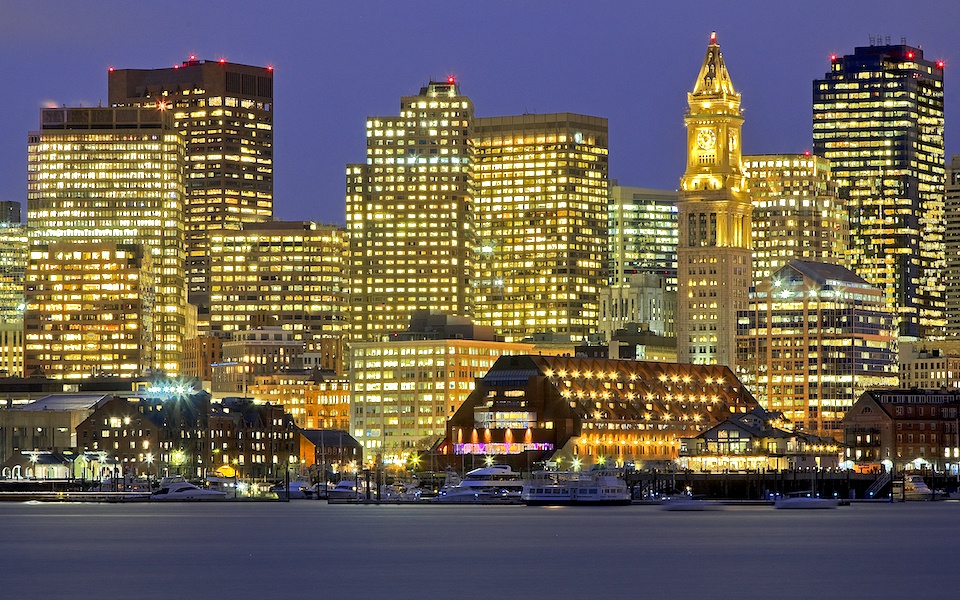 How often, anymore, are we ever in the dark? Really in the dark, I mean. If you live in Boston, the answer, most likely, is never. No matter how deep the hour of the night, you’re rarely far from a neon sign, an illuminated window in a neighboring high-rise, or something else aglow. Even in my relatively quiet neighborhood of Jamaica Plain, a sliver of streetlight peeks into my third-floor bedroom if the blinds are less than flush against the windows. Nowadays, whenever I visit my childhood home in a small central Massachusetts town, I’m awestruck by the dark, star-filled skies I used to view through my dad’s old telescope on the backyard patio.

Of course, you can’t live in a city and expect the inky blackness of the suburbs after sunset. But lately, I’ve become much more sensitive to the perniciousness of general light pollution. From the screens we stare at well into the evening to the digital displays alight on every conceivable home appliance to the car dashboards that shine like cockpits on the darkest roads, it’s always so damn bright nowadays—and yes, I’m aware what a cantankerous-sounding complaint that is.

But hear me out! Light pollution is a bona fide problem, and the Boston area, which has seen a massive amount of skyline-shaping development over the past decade, really is seeing much more of it. In 2017, researchers found that light pollution has been increasing nationally at a rate of 2.2 percent per year; in Massachusetts, though, that rate has been more like 4 to 6 percent, according to Tim Brothers of the MIT Wallace Astrophysicist Observatory, an off-campus facility in rural Westford, near the Granite State border. One major culprit: Many communities, including Boston, have been switching from yellowish sodium lights—which, if you ask me, are a hell of a lot more soothing—to starkly bright LEDs, which are more energy efficient. (In case you were wondering: There are about 67,000 electric streetlights in Boston, as well as 2,800 gas lights.) At this point, Brothers says, if you want to see a truly dark sky with stars, “you really need to get beyond the 495 corridor—beyond metro Boston.”

Beyond being a minor annoyance to curmudgeons like me, why does any of this matter? Well, there’s now plenty of research to support the common-sense observation that it’s usually a bad idea to mess with the concept of natural nighttime. Light pollution is known to confuse and kill migrating birds, nesting turtles, and other forms of wildlife. In humans, meanwhile, the blue light emitted by many of those modern LED streetlights, among other sources, is understood to suppress melatonin levels and confuse the body’s natural circadian rhythm. That’s linked to higher rates of insomnia, as well as a host of other possible health problems—including increased risks of diabetes, cancer, and cardiovascular disease—according to a bombshell 2016 report from the American Medical Association.

And yet even as light pollution increases in Massachusetts, we haven’t been doing much about the problem. In fact, ours is the only state in the Northeast that has yet to pass light pollution legislation. That’s about to change, though, thanks to alarm-sounders like Brothers and state Senator Cynthia Creem: Creem is currently the lead sponsor of a bipartisan bill that would regulate the number of lumens (units of brightness) for state-funded projects—including those on roadways—and require new and replacement lighting fixtures to be fully shielded, to prevent the strong “scattering” effect of blue light. (An identical bill has also been proposed in the House.) Although previous efforts around similar bills haven’t gone anywhere, Creem is optimistic that this time will be different, thanks to greater awareness that light pollution really is, you know, a thing.

There is one good thing about light pollution: It’s reversible. And so while we wait on a statewide fix, it’ll be up to individual towns to find solutions. In 2014, the city of Cambridge began dimming its 7,000 streetlights by up to 50 percent during certain hours—saving a lot of money and reducing its carbon footprint in the process. Across the river, meanwhile, things are brighter than ever, with glass towers popping up like candlesticks all over the city. The Boston Planning & Development Agency requires applicants for new-construction projects to submit environmental studies and mitigation measures related to air quality, water, and noise. It’s time to add light pollution to the list.

Of course, there’s no denying that, at the end of the day, we live in a city—and electric nights come with the territory. That’s “the price you pay” for the vitality of urban life, says Richard Griswold, associate vice president and dean of students at Boston Architectural College. “One of our biggest landmarks is even a light: the Citgo sign,” Griswold notes. “To an extent, we celebrate our lights.”

Fair enough. Still, call me old-fashioned, but I’d like to be able to celebrate some non-neon lights now and then. So I think I know what I’ll get my dad for his birthday in a few weeks: a new telescope for the backyard. Out there, it’s still dark enough out there to get in some good stargazing—and, until that streetlight outside my apartment window is shielded, a better night’s sleep.