You don't get an opportunity like this every day. Here's how Boston could seize the moment. 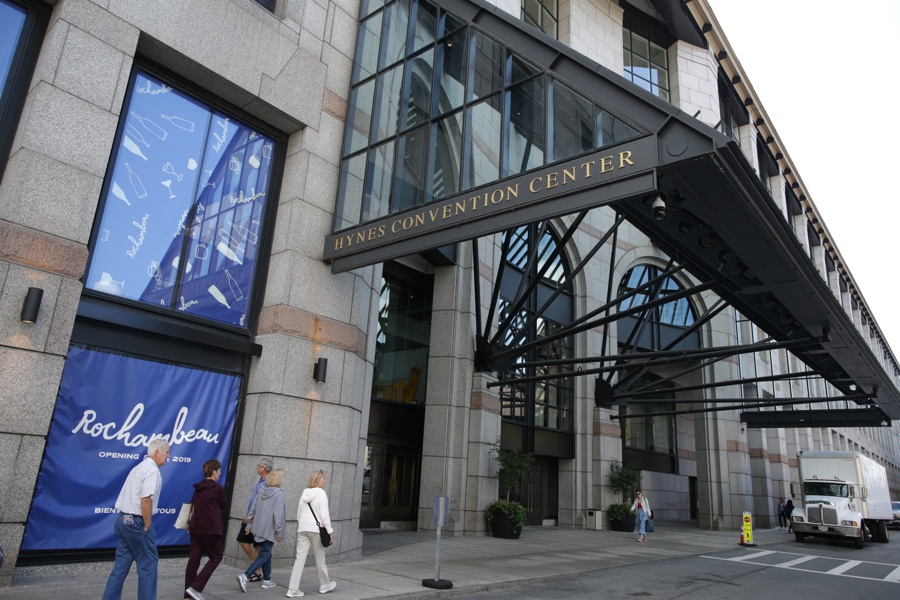 Let’s say, for the sake of argument, that you’ve got a few hundred million squirreled away to splurge on a skyscraper. On top of that, you’ve got access to an impossibly large chunk of land—six acres—in the middle of Back Bay, just steps from the Prudential Center and the city’s shopping district, not to mention access to the Orange and Green lines. Finally, you’ve got carte blanche to build whatever you want. What would you build? What do you think the city needs?

As the state mulls a plan to sell the Hynes Convention Center—or more to the point, the absurdly valuable land it sits upon—this question hovers between a hypothetical and a neighborhood-upending reality, and last week we got our first glimpse of what the future might hold. A report from the Massachusetts Convention Center Authority proposed 2.3 million feet of office space, retail, and 650 units of housing, which is all fine and good. (The authority is planning to use the proceeds to help fund a $500 million expansion at the city’s larger and better-loved convention facility in the Seaport if lawmakers sign off on the deal.)

At the same time, can’t we think of something a little more exciting to do with one of the last great development opportunities in Boston? After all, Frank Petz of Colliers International, which is selling the property, tells me the opportunity to take “what is basically a big box warehouse in one of Boston’s most glamorous neighborhoods” and do something cool with it “is an urban planning dream.” Damn right it is. So let’s dream big! We asked some of the people with skin in the game what they would do if they were in charge.

If you’re a parent in the Back Bay, you know it all too well: There’s nowhere to send the little ones to school. “You’re the furthest from an elementary school of anywhere in the city. You’re really, really far,” says City Councilor Kenzie Bok, who represents the area. And there’s never anywhere to build one—that is, unless a 6-acre crater suddenly emerges in your backyard. So Bok says that if she could “wave her magic wand,” she’d see any redevelopment of the area include needed public resources, among them a community center and, yes, a school. Either way, she wants to see rigorous community discussion about how to put this rare opportunity to good use, long-term. “Whenever you’re thinking of a piece of public land merely as a source of a check, you should think again,” she says.

Make it a place Bostonians actually want to go

Let’s face it: Despite sitting in one of the hottest neighborhoods in the city, the convention center is basically a waste of space for those of us who live here. “There’s really nothing to draw people in. It’s a block you hurry through,” says Amy Cotter, associate director of urban programs at Cambridge’s Lincoln Institute. Her radical idea is, well, give Bostonians a reason to go there: Build a buzzing street level that’s full of small businesses—not just chain restaurants or big corporate retailers, but smaller spaces where local up-and-comers could thrive—with apartments on top for people who want to live where the action is.

Build affordable housing. A lot of it

I don’t know if you’ve heard, but there’s a housing crisis underway—and affordable housing is not only hard to come by, it’s hard to get built. At Suffolk Downs, for example, developer Tom O’Brien of HYM Investments has said he thinks 13 percent is the biggest percentage the site can reasonably handle for affordable housing. City Life/Vida Urbana has pushed for 50 percent, which is a tall order. It may be hard to nudge that figure up in a space like the Hynes location, where the cost per unit of housing is likely to be steep, but it is state* land, so why not make it work for us? Even if we don’t hit 50/50, a high concentration of affordable units in such a desirable area would do wonders for working Bostonians.

Anything, so long as there’s still convention space

Some neighbors aren’t keen on seeing all the Hynes’ conventioneer traffic move out of the neighborhood, and want whatever goes on the site to have some convention space. The Back Bay Association’s Meg Mainzer-Cohen says it’s only right: Many of the businesses in the area—restaurants, hotels, retailers—popped up in part to cater to lanyard-clad conventioneers wandering out of the Hynes. “We believe it’s critically important to have 150,000 square feet or so of meeting space on the site,” Mainzer-Cohen says. The MCCA is free to focus on the new location in the Seaport, she says, “but don’t drive a stake through the heart of Back Bay’s economic vitality.”

The public art renaissance in Boston is in full force, so what better way to use a six-acre blank canvas (pun intended) than to require that part of it be earmarked for creative public use? At the Ink Block development, you’ll recall, graffiti artists were invited to decorate the nearby underpass with splashes of color, and the giant structure at Dewey Square on the Greenway is now the city’s biggest and best-known mural wall. One thing the Seaport did absolutely right was to embrace public art right out of the gate. The same could be done by planning ahead at the Hynes.

Nothing. Nothing at all

Of course, the state could always opt not to sell it at all. State Sen. William Brownsberger says concerns he’s hearing from neighbors range from the economic (they fear losing out on the foot traffic the convention center brings) to the aesthetic (they’re in no hurry to see a massive tower cast a shadow over Boylston). So Brownsberger says he’s still studying the issue, but unless he’s satisfied that selling is a net positive for neighbors in Back Bay—and not just in the Seaport—he’s against it. “From what I hear from people, I don’t think there’s a strong argument that Boston should not have two [convention] facilities,” he says. “It strikes me that Boston can win at a higher level keeping them both.”

The point is: Right now, this is state land, and it shouldn’t just be sold off for just anything. Whatever goes in there, Bostonians should have a say. Who knows what they might come up with?

*Correction: An earlier version of this post stated that the city owns the lot that Hynes sits on. The land is owned by the state.