It involves climate change, a parking garage, and the ambitious plans to build one of Boston's tallest high-rises. 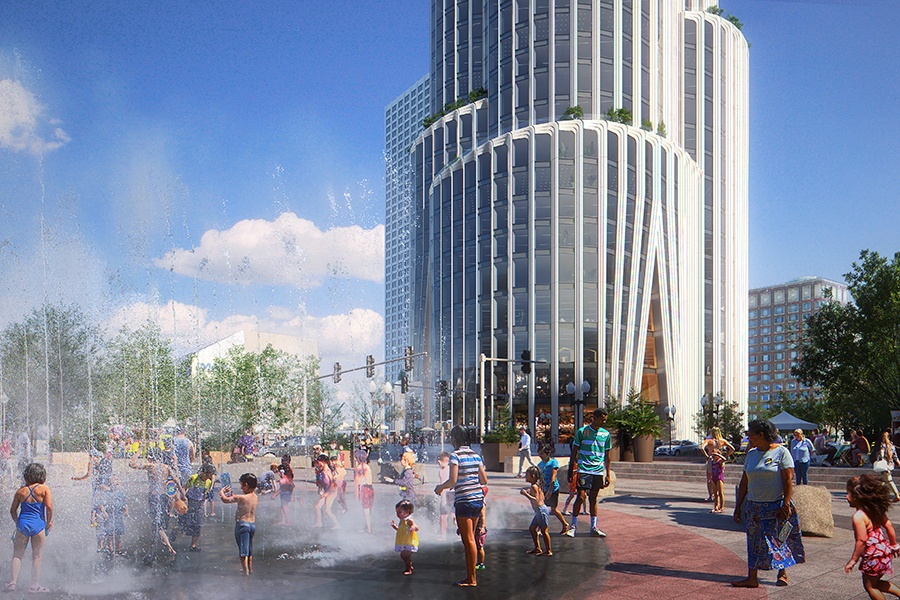 Rendering courtesy of the Chiofaro Company

Like those of most longstanding, family-friendly tourist destinations, the New England Aquarium’s Twitter feed is usually pretty innocuous. Last week, though, @NEAQ interrupted its usual stream of penguin videos and marine puns to make a bold statement—that the Aquarium is opposed to recent plans filed with the Boston Planning and Development Agency to destroy the Boston Harbor parking garage and build a new luxury high rise and public space in its place. A Twitter pile-on quickly turned the Aquarium’s mentions into a cesspool, with people accusing the tourist destination of “greenwashing,” while others deemed NEAQ’s motives “fishy” (get it?) and still more paired off to bicker about best development and transit practices. What, exactly, did @NEAQ get ratioed over, and why should we care? We’ve broken down what you need to know:

Wait—what do the kids mean when they say someone “got ratioed?”

When you tweet a hot take on Twitter, a “like” from another user typically signals agreement with your stance. If someone disagrees with you, they might instead reply to your tweet and call you a name, or perhaps share a .gif that expresses just how dumb you are. When your tweet elicits more replies than likes or retweets, you have been ratioed. The aforementioned @NEAQ tweet has 54 replies and only 33 likes, officially earning it this badge of Internet dishonor.

A proposed plan for a 600ft tower on the waterfront would decrease waterfront accessibility and miss opportunities for #ClimateResiliency. Make your voices heard tonight at the only public meeting and help us #SaveBostonsWaterfront https://t.co/rd1wa4Mg1c

The Chiofaro Company (the developers behind downtown’s International Place) filed a plan in January for a $1 billion, 600-foot glass tower that would replace the Boston Harbor Garage, which the company purchased in 2007. The garage is nestled right next to the Aquarium, and while it’s not a terribly aesthetically pleasing neighbor, it’s certainly a convenient option for visitors.

The tower will also be accompanied by over 28,000 square feet of open space, some of which will become a pedestrian-friendly public plaza. The plaza will connect the Greenway with the Aquarium’s proposed Blueway, a publicly-accessible promenade leading to the water’s edge on Central Wharf. This will all take the place of the block-long, seven story parking garage currently on that parcel of land.

As the plans currently stand, the Pinnacle would be one of the city’s tallest high rises, coming in shorter than the 749-foot Prudential Tower and the 742-foot One Dalton, but taller than One Financial Center and 100 Federal Street. 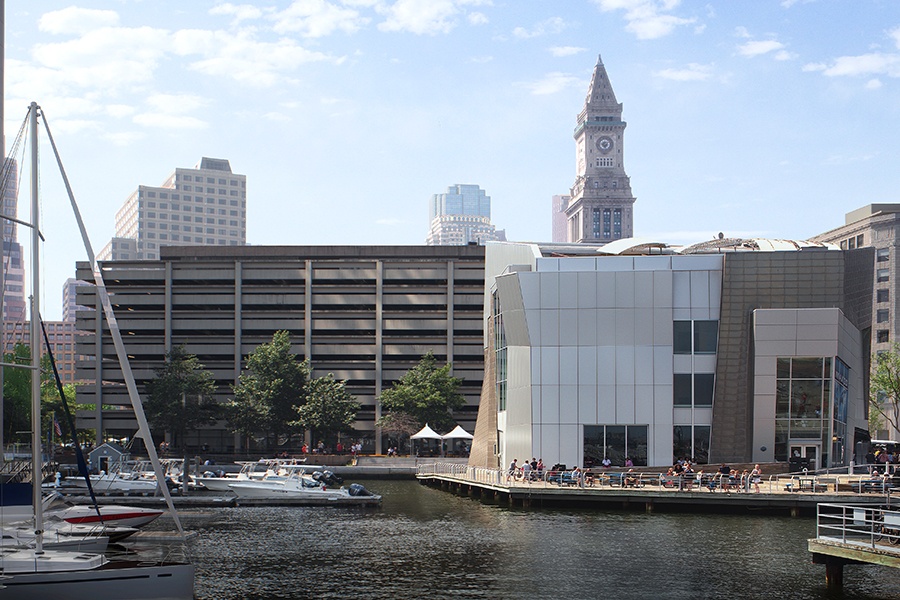 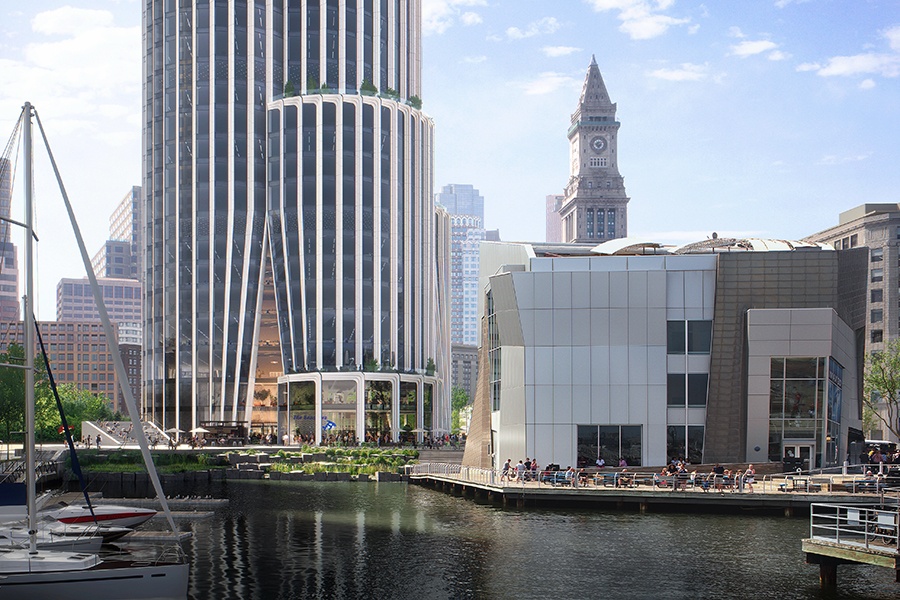 The Boston Harbor Garage and the Pinnacle tower and public plaza that would replace it. Renderings courtesy of the Chiofaro Company

That sounds pretty cool. Why doesn’t the Aquarium want to get behind it?

According to Vikki Spruill, director and CEO of the Aquarium, Chiofaro’s plans are “woefully inadequate from a climate resilience perspective.”

Spruill also criticized the development team for lacking more details about their climate plans, and said, “Our goal is to make sure that the process and the end result is truly the best we can do for our city in terms of resiliency, district wide-planning in the face of climate change and public accessibility to a waterfront that we are all invested in protecting.  The current project is not a catalyst, it is an island—and will be one literally if another king tide or major storm surge occurs. I know we can do better than that.”

Well, has Chiofaro taken climate change into account in the plans for the tower?

Yes. Chiofaro plans to elevate the entirety of the project site and the adjacent Harborwalk by four feet to account for sea level rise. The company has also proposed to create a “living shoreline” at the Harborwalk’s edge that would serve as a resilience measure and an educational tool. Finally, the firm is also obliged to make a $10 million contribution toward the realization of the aquarium’s Blueway project. Chiofaro’s contribution to the Blueway would be the largest offset in the history of the municipal harbor planning program, the company was told.

Why isn’t the Aquarium satisfied with those measures?

The Aquarium, Spruill says, sees itself as a steward of the Wharf, situating the problem of climate resilience front and center for the organization—and while the Pinnacle plans include plenty of protections for the project site itself, Spruill feels that any plans for development on the waterfront need to look beyond a parcel-by-parcel basis. “This isn’t about the developer or planning authority or anything else,” she says. “We think the city is actually missing an opportunity to think more boldly about a district-wide solution for the downtown waterfront.”

Chiofaro, for the record, is aware of this argument. “We’re under no illusion that those four things in and of themselves are going to provide the entirety of a district-wide solution for sea level rise,” says Rob Caridad, the project’s manager. “But we view our project as a catalyst. We know it’s not going to solve everything in one fell swoop, but somebody has to be the first.”

For Spruill, the nature of the Pinnacle tower is also a sticking point. Spruill is skeptical of the benefits that a large, elite building can offer to the public. “We think that this has to be a part of Boston that the public can enjoy and engage in, not just those who can afford an $8 latte or go to a nice restaurant in a luxury high rise,” she says.

That seems like a rational dispute. So why did so many people get upset online?

Housing, transit, and climate activists across Twitter seem to have interpreted the Aquarium’s tweet about the proposal as the Aquarium embracing an anti-development, NIMBY-ish stance. Many also pointed out the irony of protecting a parking garage in the name of climate resilience.

Parking garages are an opportunity for climate resiliency?

Are you for real?

Come on, Aquarium, you’re better than this.

If you’re concerned about people getting to the Aquarium, the @MBTA literally has a station named “Aquarium.”

Please stop doing this. It’s just a really bad look for you all; a greenwashing attempt to save a parking garage on the waterfront.

I won’t be attending the aquarium while this nonsense continues.

Prioritising cars above transit-oriented development pollutes our air and contributes to climate change. I expect better from an organization that should be doing everything it can to protect our environment.

#Boston #YIMBY URGENT – Please fill out the comment form in support of the Harbor Garage Redevelopment (now “Pinnacle at Central Wharf”). @BostonPlans needs positive comments to drown out the negative noise from the @NEAQ: https://t.co/gKDAHbpPJN

Jeff Byrnes, a member of Somerville YIMBY’s Steering Committee, echoed this disapproval. “We have this terrible dependency on cars that’s literally killing us, and anything we do that encourages [driving] is a bad idea and has been for a long time,” he says. “We also want people to live downtown, even if they’re wealthy, because that means that those folks aren’t living further away and driving more.” If the Aquarium were to put forward a tangible, alternative solution to both the garage and the Pinnacle, Byrnes says, he might change his mind—but he hasn’t seen sufficient evidence that the Aquarium has such a plan. “So far, I’ve just seen them stand in the way,” he says. “I’m simply hearing ‘no.’”

And how does the Aquarium feel about the Twitter response?

“We are not advocating that a garage is a great choice for this site,” says Spruill. “Why are we buying into the developer’s narrative that in order to replace the garage we must have a 600 foot tower and the bare minimum in terms of climate resilience? We simply don’t believe that argument—it’s a false choice.”

The project is currently in a city review process that will likely stretch on for months. From now until April 3, Chiofaro is also gathering public comments, hosting a variety of open house meetings and meetings with neighborhood organizations. “We put together our proposal with the full knowledge that it was going to continue to evolve and we want it to continue to evolve based on the feedback that we get during this process,” Caridad says. “Our primary job now is to listen.”

The Aquarium, for their part, is unwavering in their opposition to the Pinnacle project as it currently stands. Last week, Spruill spoke at the first public meeting on the project, reiterating her opinion that the project does not adequately engage with the waterfront as a whole.

The project is also actively battling two lawsuits—one filed by residents of the abutting Harbor Tower condominiums, who worry the development will ruin their views, and the other by the Conservation Law Foundation.

This story has been updated with additional comment from the Aquarium.