It’s the most Boston holiday there is. But what are we really supposed to be celebrating? 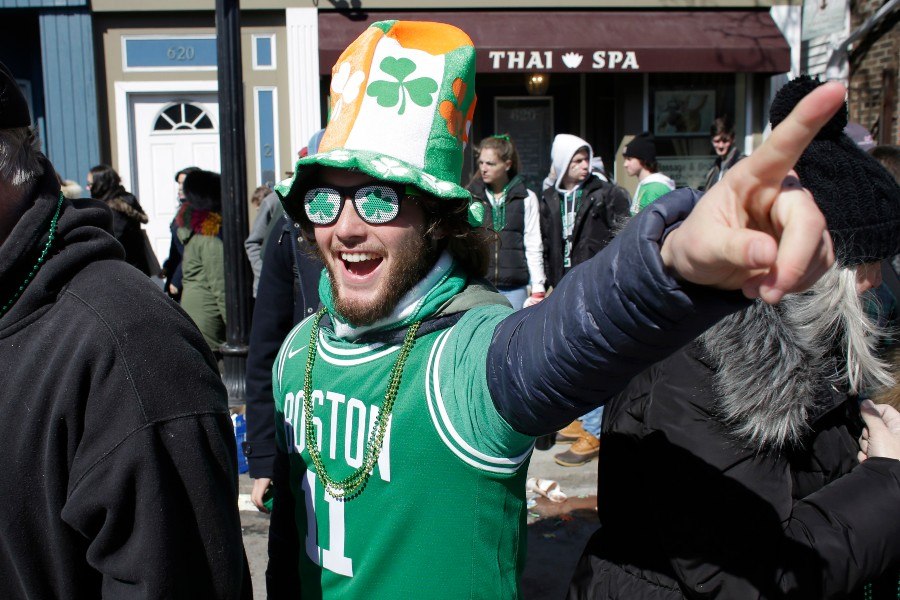 There is no holiday more quintessentially Boston than St. Patrick’s Day. How Boston is St. Patrick’s Day? Not only did we basically invent the holiday as celebrated today—really we did, way back in 1737—but we also invented another holiday, Evacuation Day, so we could take St. Patrick’s off. The St. Patrick’s Day Breakfast is one of our most steadfast political traditions. And so, when St. Patrick’s Day rolls around each March 17, we don our Kelly greens and “top of the morning” each other, until it’s time to join the crush at our local to sing Pogues songs while drinking whiskey in the jar ‘til we’re all Irish rovers.

This year, however, is different: Fears over the coronavirus led to the cancellation of both the St. Patrick’s Day Parade in South Boston and the famous breakfast. This forced reprieve might be a good time to ask ourselves, why, when our city has grown grown more and more diverse, and its connection to Ireland has faded further into the rearview, do we still celebrate St. Patrick’s Day with such fervor? Don’t get me wrong, I’m as happy as anyone here to sip a pint of Guinness and maybe send a glass of Jameson after it (for luck, of course), but when it comes to fighting the crowd at the bar on March 17, I’ve often found myself wondering: Is St. Patrick’s Day actually about anything? Is it just an excuse to go out and get plastered? Or is there something we can resurrect from its origins in America as a kind of PR campaign to combat anti-immigrant sentiment?

What isn’t up for debate is that it certainly used to be about something. The roots of the holiday in America are political and firmly planted in Boston. St. Patrick, who brought Christianity to Ireland in the 5th century, had been celebrated in Ireland since at least the 1600s. In America, “The first recorded celebrations of March 17 took place in Boston in 1737, when a group of elite Irish men came together to celebrate over dinner what they referred to as ‘the Irish saint,’” wrote Mike Cronin, a historian and the academic director at Boston College’s Dublin campus, in a short history about the celebration’s origins. The celebration that year also included a parade. New York followed suit the year after, and soon celebrations were held all over, though they tended to be more political than bacchanal.

“In essence, St. Patrick’s Day was a public declaration of a hybrid identity—a belief in the future of Ireland as a nation free from British rule, and a strict adherence to the values and liberties that the U.S. offered them,” Cronin writes. We arrived where we are today when, in the 20th century, folks realized they could make a killing hawking green beer and cheap kitsch covered in shamrocks. From the look of things, we’ve pretty much stayed there.

Depending on your perspective, that might be fine. Many holidays are just an excuse to skip a day of work: New Year’s Day is for recovering from hangovers; Memorial Day is the start of summer and a weekend of sales; Labor Day is the cutoff for wearing white; and even the explicitly patriotic 4th of July is mostly an excuse to grill in your backyard and blow things up. None of those holidays, however, pay overt homage to what is allegedly being celebrated.

St. Patrick’s, meanwhile, is defined by the cartoonish trappings of Irishness—shamrocks, Guinness, whiskey, green things. This, of course, can be a bit baffling to native Irish people, however. John Murray, the owner of Back Bay Boxing and a real live Irish person, remembers being confused by the hoopla around St. Patrick’s Day when he first moved to Boston. “The first time I ever went to a [St. Patrick’s Day] parade was when I came to Boston,” he says. When he was a teenager in Ireland, St. Patrick’s Day was most notable to him as a bank holiday with a three-day weekend. Confronted with the full spectacle of it here, he didn’t see much Irishness to the celebration. “It’s got very little to do with Ireland. From an Irish-American perspective, they’d probably say that I’m wrong, but it’s very American.” He doesn’t plan on falling in with the city’s festivities. “It’s a teenyboppers’ day out,” says Murray. “I’m a little older than a teenybopper, so I’m not going to go get drunk on the sidewalk anyway.” He does see some upside, however. “I do like the kiss me I’m Irish part. It’s never worked for me, but it’s a nice idea.”

In Ireland, the holiday was more like Thanksgiving, says Thomas Groome, a professor of theology and religious education at Boston College, who is also Irish. He remembers that his father would go out to the field and pick a shamrock to wear in his hat, people went to Mass, and then his cousins would come over for dinner and they’d sit around and play games. His father, he says, “would have found it very strange to see people out drinking green beer and wearing funny hats. It was holy day, not a holiday.” That said, he’s come around to the American iteration of the day and he thinks there’s something important happening amidst the craic—Irish for banter and gossip—and festivity. “It is a celebration of immigration, which in this day and age we surely need,” he says. “It’s a reminder of how immigrants to America can do very well, and should be welcomed and given every chance to realize the American dream.” So, sure, it’s a celebration of Irish culture and how far the Irish have come since the early days of being discriminated against, but it’s also a reminder to them, says Groome. “I think the Irish have a responsibility to help [new immigrants] on their way. Otherwise we’ve lost our memory.”

Groome isn’t alone in thinking that St. Patrick’s Day might be about looking forward as well backward. Boston City Councilor Ed Flynn, who represents South Boston (as well as Beacon Hill, Chinatown, and the South End), said as much when I asked him what the day means. “For the city of Boston, and the people of South Boston in particular, St. Patrick’s Day continues to represent an opportunity for us to celebrate and reflect on our proud Irish immigrant roots and the discrimination that our ancestors faced when coming here in search of a better life for themselves and their families,” he said in a written statement. But he echoed Groome’s point, too. “It is because of this experience that we are mindful, and respectful, of the culture of our immigrant neighbors and the difficulties that recent immigrants continue to face today.”

Is that what everyone is thinking about as they raise a glass and toast slainte down at the pub? Maybe, maybe not. But as time wears on, our traditions start to mean different things to meet the needs of the moment. You could certainly do a lot worse right now than a holiday that asks us to think of what we owe each other as we come together to have a laugh and share some craic. At the very least, it’s a thought that’s certainly worth raising a pint to.