Massachusetts' most outspoken cannabis regulator met me at Boston’s first dispensary to talk about why it doesn’t matter that she’s a customer, how she’s taking cues from Mayor Marty Walsh, and what makes her think the future is bright. 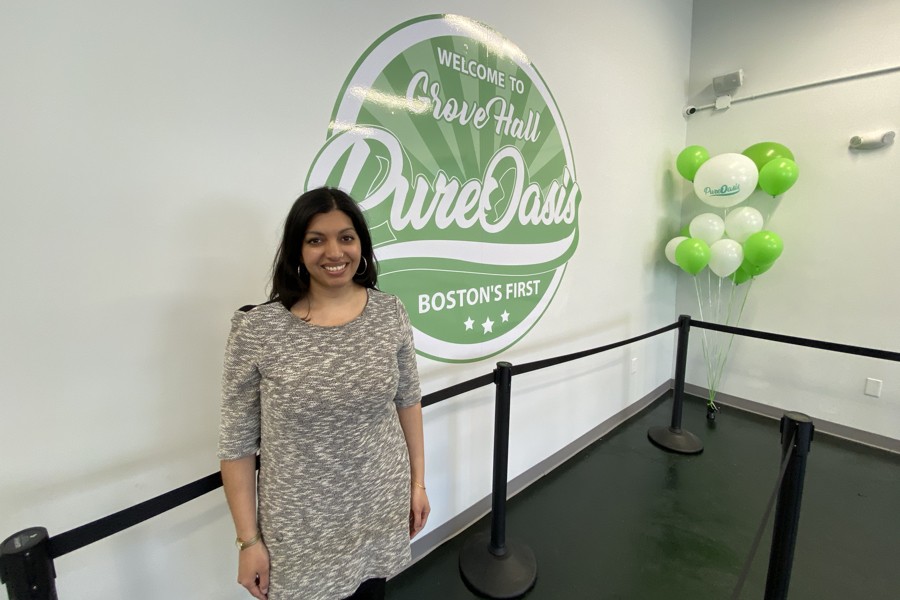 Shaleen Title has waited a long time for this moment. Before she was appointed to Massachusetts’ Cannabis Control Commission, the 34-year-old lawyer and activist spent her professional career pushing to reform our punitive drug laws and arguing that the people who suffered the most under the War on Drugs be given a chance to make money selling weed legally. So, Title—the most outspoken of the five CCC members, who respectively specialize in public health, public safety, regulation, business, and in Title’s case social justice—was taking a victory lap on Monday, as the Pure Oasis dispensary flung open its doors in Dorchester. The new shop on Blue Hill Avenue is the first within city limits, the state’s first black-owned pot shop, and the first to come online through the CCC’s economic empowerment program, which seeks to help communities disproportionately harmed by drug enforcement open marijuana businesses.

Opening day at the shop seemed like the ideal day to meet up. After Title, the only one of the CCC to make a point of actually shopping at pot shops, grabbed a pre-rolled “Cookies N’ Cream” joint and a T-shirt with the word “Smoke” across its chest from a Pure Oasis cashier, we sat down to talk about what this all means.

How does it feel to be here, at a pot shop that has just made history?

It’s awesome. It’s so cool to see this come to life. When I started out, people were kind of proverbially patting me on the head, like, “Okay. Sure. Your equity applicants are great but I’m gonna open the first store in Boston.” It’s satisfying to see it play out the way it has.

How many of the CCC commissioners are also customers?

I have no idea. I’ve never talked to them about it. But I do know that when you see stuff on paper and in pictures it’s not the same as when you see it in real life.

How many of you on the CCC actually use cannabis?

Our first day we were asked about that: I, along with Commissioner Flanagan, didn’t answer and the other three said that they had tried it. It’s worth asking, but I also think it’s not that relevant. I didn’t answer that question because I didn’t want to be defined by it—I think you can be a good regulator whether or not you use it.

Mayor Walsh warned about “chaos” due to traffic jams and long lines on day one, but that clearly didn’t happen. Only a few dozen showed up for the initial door-opening, and there is no line right now. What did he get wrong?

I think it’s good to over-prepare, definitely for traffic and parking issues and crowds. After 40 stores have opened, I think we struck the right note of being over-prepared just in case and then hopefully everything goes smoothly like it did today.

Is it disappointing? They had all these rope lines set up and people aren’t in them.

What did you think about seeing the mayor giving a press conference inside of a pot shop, after opposing legalization so vigorously just a few years ago?

You gotta stop and look big picture and celebrate those moments and see how far we’ve come. This is going in a direction where people who use cannabis are being treated increasingly like the normal, law-abiding people that they are.

There’s basically a consensus now. Joe Kennedy III publicly opposed legalization, but it’d be a lot harder for him to run as an anti-cannabis candidate now.

Any advice for Mayor Walsh now that he has his own commission?

I mean, I would take advice from him. This is a city that’s found a way to include equity applicants and create a loan fund. The state has not yet figured out how to do that. We need local officials to act like Boston and Worcester and Holyoke have and work with these applicants. There’s going to be a lot of things that need to happen for us to equitably implement this law.

Is this week’s opening giving other applicants hope?

Yes. It’s so different to talk to people who are actually going through the [social equity] program versus getting filtered information [through the press]. They are overwhelmingly happy. They’re like, ‘This program has been a godsend. I never would have gotten this far without it.’ I hate criticizing media, so don’t take this the wrong way, but it’s just different from how the narrative is playing out in the media about this program being a failure, because it doesn’t match what I witness myself.

The Boston Globe has ramped up its cannabis coverage in recent years. How have they done?

In general, my experience has been positive with media. The attention that people pay to this is kind of astounding, but it just makes decisions better. Regulating this industry safely and effectively and equitably is not an easy thing. It’s a challenge. So, to be able to talk about those challenges and have people really listen, I feel lucky.

What did we learn from the vape crisis and the way that the state reacted to it?

We know very little about these [vape] products. We don’t know, even if someone’s using a regulated vape pen, what the effects will be in 30 years. So, we need to make sure that we are regulating them, monitoring them, and collecting data. I think the overall lesson that we learned is regulation works and prohibition doesn’t.

Are there parallels between the vaping crisis and the reaction to the coronavirus outbreak?

It highlights something that’s true for all public health crises, which is how important it is to be transparent about the data that you have so that people can empower themselves and make informed decisions. 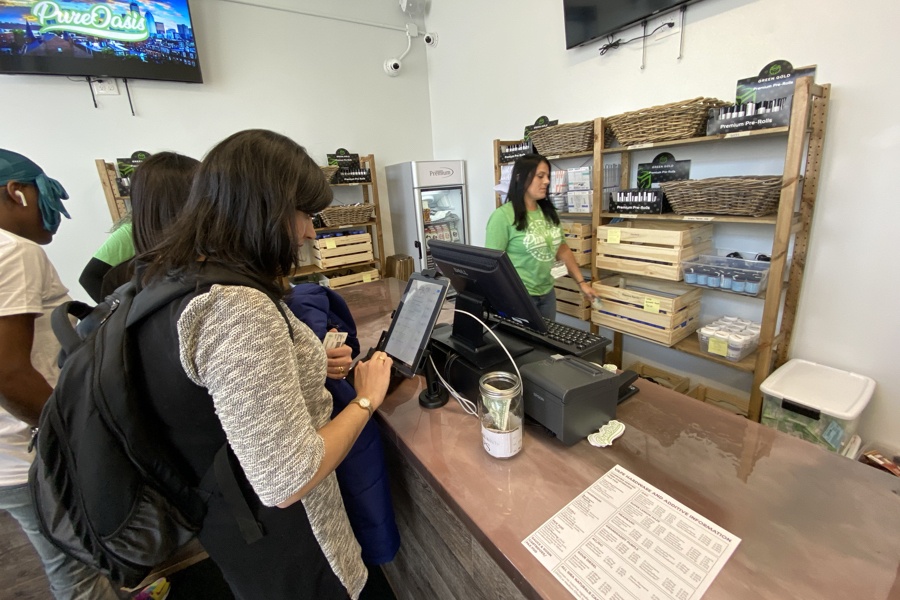 A woman frustrated by the pace of approval for her economic empowerment application protested at your hearings. What impact did that have?

For me, it was really enlightening. It highlighted how important it is to communicate with people and that they understand where they stand. It is kind of disheartening, though, to see people think that making a public fuss is their only way to make a point. I wish that people would feel comfortable coming straight to me.

Do you find people are coming to you directly a lot?

They always have. People come to me all the time directly and I want them to.

What impact do you think the Fall River fiasco, where ex-mayor Jasiel Correia is accused of extorting cannabis companies that needed his sign-off to open in his city, had on things?

I was not surprised in the slightest, because the environment was right for that kind of corruption because nobody was enforcing the law on host community agreements. It was only a matter of time before somebody tried something like that.

How will social consumption change the way people interact with and think about cannabis?

The biggest change will be acceptance. Eventually it’ll be like the way you can buy a beer at a movie theater. With social consumption people can come out of the shadows: concerts, movies, art, massages, yoga—all these daily parts of life where they’re currently using cannabis, but they have to hide it.

How long do you want to keep doing this? What’s next for you?

I don’t know. I just focus on the next few months ahead of me. I’m not necessarily the exact type of person who is normally appointed for a position like this, so the fact that [the Baker administration] gave me this opportunity is something that I will forever be grateful for. I will say as an activist, as an entrepreneur, as a lawyer, as a government regulator, I’ve always had the same goal, which is fair legalization of drugs. I’ll probably stay in that realm one way or another.

Who would be best for the legalization movement in the White House? Biden, Sanders, or Trump?

Man, I don’t have the slightest idea. There was a time when I would have been able to give you like a very detailed and confident answer for each of those three, but the way the primaries are going, I just have no idea. I have no clue. (After this interview, Title reached out to clarify that Sanders “would be best for legalization, given that he is the only one who supports legalization.”)

I don’t think they’re anybody’s strong suit. I do not subscribe to the idea that experts, and particularly reasonable-sounding white male experts, are the ultimate arbiters of what’s going to happen and what’s reasonable. I’ve never subscribed to that and I still don’t.