Boston Coronavirus News: A Ban on Large Gatherings, Shut-In Celtics, and a Marathon Decision At Last 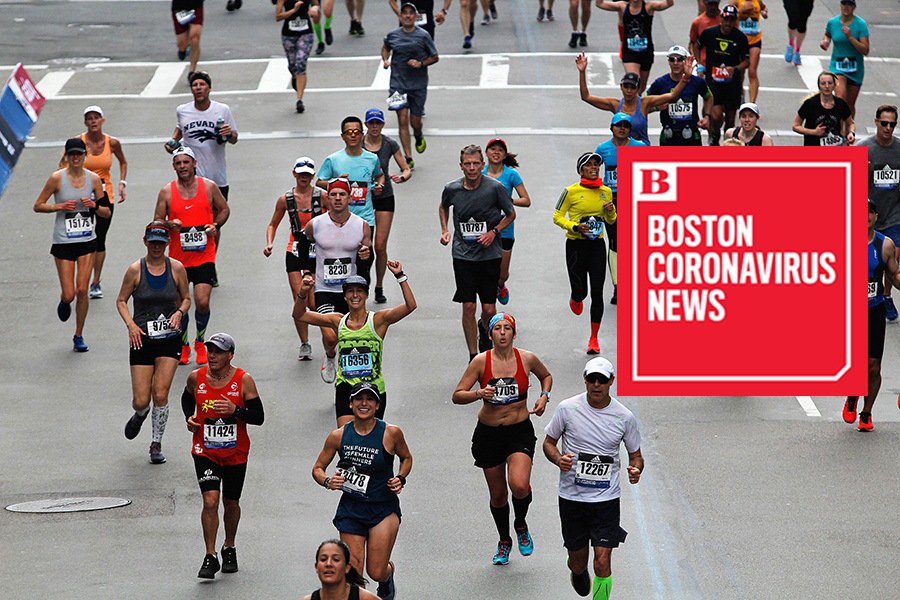 The Boston Marathon Has Been Postponed

We had a feeling this was coming. At a City Hall press conference this morning, Governor Charlie Baker and Mayor Marty Walsh announced that the Boston Marathon will officially be postponed and rescheduled to September 14, the first time in the Marathon’s 124-year history that the race will be delayed. Baker plans to declare Monday, September 14, a state holiday. The weekend, Walsh said this morning, will serve as a chance to help Boston’s small businesses recover from the presumably lengthy slowdown thanks to the virus.

WGBH, WBUR, Commonwealth, and the Boston Globe all reported yesterday about the limitations of coronavirus testing in the state. The Massachusetts Department of Public Health says they currently have the ability to test up to 5,000 people for the virus, and that more than 200 have been tested so far. Dr. Monique Aurora Tello, a doctor at Massachusetts General Hospital, tells the Globe that the limits on testing have stood in the way of containing the spread of the disease.

During a press conference Friday afternoon, Secretary of Health and Human Services Marylou Sudders announced that the state public health lab is working around the clock, and has been turning test results around in 24-48 hour windows. Next week, she said, the lab will be able to double the capacity of testing from 200 to 400 daily. Quest Diagnostics and LabCorp also received federal approval for testing yesterday, which will help ease the burden on the state lab. Governor Charlie Baker was asked about how many people had been tested so far, but didn’t provide a number.

Gov. Charlie Baker declines to say how many people in Mass have been tested for #coronavirus. Says situation is fluid and numbers will be posted online… next Wednesday. https://t.co/OCWEwSvEEZ #mapoli

In perhaps the most comprehensive social distancing measure yet, Baker  announced this afternoon that the state is banning gatherings of more than 250 people in Massachusetts. This applies to civic, public, leisure, sports, faith, concert, convention, parade, fair, and festival events. Notable exceptions include public transit, libraries, malls and grocery stores, offices and restaurants where people can be an arm’s-length away from each other, and, of course, medical facilities.

Now that whatever large gathering you were planning to attend this weekend is probably cancelled, thinking you might practice your social distancing in the roomy halls of Boston’s museums? Not so fast. Yesterday afternoon, the MFA, ICA, Isabella Stewart Gardner Museum, and Harvard Art Museums announced in a joint statement that they will all close the public. Several other institutions followed suit, including the Museum of Science, the Boston Children’s Museum, and the New England Aquarium.

Several performing arts institutions are also halting their programming schedules: The Boch Center, Boston Ballet, and the Boston Symphony Orchestra have cancelled or postponed performances. Several concerts have also been postponed or cancelled, including a Dropkick Murphys performance scheduled for tonight at the Encore Casino and the Billie Eilish concert scheduled for next Thursday at TD Garden.

It is with great sadness to announce the following Billie Eilish ‘WHERE DO WE GO’ North American tour dates have been postponed until further notice. Details on postponed dates to be announced soon. All tickets will be honored for the new dates. (1/4)

Numerous school districts across the state, including Brookline, Everett, Medford, and Natick, are also closing, beginning today (Cambridge and Somerville will be closed started Monday). The most remarkable holdout at this point? Boston Public Schools. The district remains open, though the three campuses of the Eliot K-8 school have been closed after a “non-student member” of the school’s community tested positive for COVID-19. At a press conference this morning, Mayor Walsh confirmed that school will be in session for BPS students next week, but that more information is forthcoming. WBUR reports that, as of this morning, Massachusetts education leaders are not planning state-wide school closures.

A Place to Direct Your Questions

In the Friday press conference, HHS Secretary Sudders also announced that a 211 number for coronavirus information is now up and running. If you have a question, dial 211 and press 26 to be directed to the coronavirus line. Help will be available in 150 different languages, Sudders said.

A Lengthy Time Out for Sports

Yesterday, Utah Jazz player Rudy Gobert became the first professional athlete on the continent to test positive for COVID-19 (his teammate, Donovan Mitchell has also tested positive—and recently paid a visit to the still-open Encore Casino, by the way). The sports world responded quickly—the NBA, MLB, and NHL all put their seasons on pause and the NCAA cancelled the annual March Madness tournament. The Celtics announced yesterday afternoon that all players who had close contact with Utah Jazz players at their game on March 6 will self-quarantine through the weekend and get tested for the disease. All of the team’s group workouts and practices will also be cancelled through at least Monday. Fortunately, according to a report in the Athletic, the DPH informed the Celtics that it’s “unlikely anyone on the team came into contact with the Jazz players while they were contagious.”

How are the Celtics biding all this unexpected free time? Jaylen Brown has become particularly active on Instagram, using the platform to pass on COVID-19 information and encourage social distancing to his followers.

Wake up ! I understand everybody is still in disbelief, but we are here now.. #SLOWTHESPREAD stay at home if you can or stay 6 feet away from people if you have to leave.. #socialdistancing the government and media really don’t have answers for everybody not enough testing set up and not enough hospitals.. quickest way to slow things down and get things back to normal is to stop all interactions everybody has to do there part please

We’ve Finally Figured Out How to Ease Rush Hour Traffic

Well, if your boss still won’t let you work from home, here’s a silver lining: WGBH reports that weekday commuting times have dropped for both drivers and T riders. During Tuesday’s commute this week, travel time was down by a third on I-93 north and south of Boston, and by a half on I-90 between 495 and Allston. Ridership on the T is down 2.5 percent in the first week of March, and photos from this week show eerily empty stations and train cars.

Some pics from my #MBTA #GreenLine commute this #fridaymorning pic.twitter.com/v7IoPfBy2K

There are two of us waiting to take the @MBTA orange line right now in Chinarown. I don’t ride everyday, but in past experiences at this time it would be packed @wbz #WBZ pic.twitter.com/Vm1aEeGZOp