Boston Coronavirus News: A Cautionary Tale of a Trip to Miami, Maddening RMV Lines, and More

The latest on the outbreak. 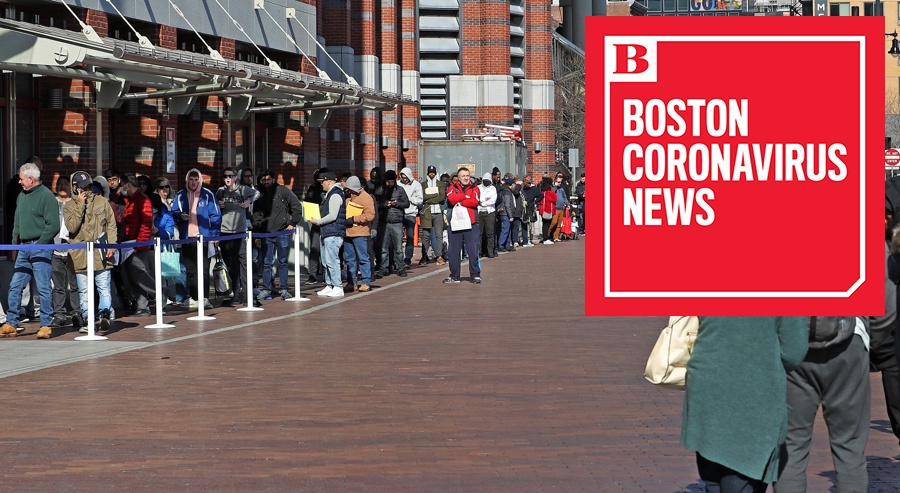 BOSTON, MA – MARCH 18: Dozens of people wait in line to get to the RMV building on Blackstone St. in Boston on March 18, 2020, despite restrictions on the number of people that can congregate in one place. Gov. Charlie Baker banned meetings of more than 25 people to prevent the spread of coronavirus. (Photo by David L. Ryan/The Boston Globe via Getty Images)

Confirmed Cases as of March 18:

People who have been officially quarantined (as of March 17): 2,054

People who have completed quarantine (as of March 17): 886

Everyone Needs to Hear about This Boston Doctor’s Florida Vacation

It seems like a whole lot of people really need to hear about stories like these to make the severity of this outbreak hit home, so here you go. The Boston Globe today shared a harrowing tale about a trip to Miami six friends took earlier this month, including a doctor at Beth Israel Deaconess Medical Center. All of them are now showing symptoms, and four have tested positive for COVID-19. If this won’t get all those spring breakers to reconsider their beach parties, nothing will.

Photos Show People Getting Dangerously Close Together in RMV Lines

The RMV reopened for business at a few select locations on Wednesday, and the crowds came to the Haymarket outpost in such large numbers that they stood together in long lines that snaked outside the building. While there were efforts to keep them at a safe distance, from the looks of it they were not always following official guidance that they should stand six feet apart. Get with it, please!

7 RMV locations reopened in Massachusetts today. This is the Haymarket location in Boston: 3+ hour wait, line out the door & no social distancing. #wcvb pic.twitter.com/JGOTncBpFK

Add four Boston College students and a State House employee to the roster of people who have confirmed positive tests for the virus.

Say goodbye for now to shopping malls. Simon Property Group (which runs Copley Place, The Shops at Chestnut Hill, South Shore Plaza and several other malls in the state) has announced it’s closing all its properties as of Wednesday night. The governor has also ordered nearly all daycare centers to close beginning Monday. A few will remain open to accommodate frontline health workers with no other options.

Let’s Take a Minute to Appreciate These Guys

The persistent press conferences packed with the latest warnings about this crisis, while essential, can wear on your psyche. So allow this pair of very Boston fellas to break things up a bit. They’ve become online micro-celebrities after they wandered out of City Hall and into the background of the latest update from the mayor. If anyone knows who they are, be sure to let me know.

This one sounds like a no-brainer. Suffolk District Attorney Rachael Rollins, hoping to keep people from being put in harms way inside jail cells as the virus tears through Massachusetts, announced today she is working to ensure that “individuals held in custody who are vulnerable because of their health, age, socio-economic status, or circumstances, but pose no meaningful risk to public safety are released from custody.” The move follows calls from Ayanna Pressley for “compassionate release” for vulnerable inmates in the nation’s prisons, as well as commuting sentences for nonviolent offenders packed into the facilities, which she called a “petri dish” for the highly contagious disease.

Even ICE Is Cooling Down

Immigration and Customs Enforcement now says that in light of the outbreak it will stop rounding up and arresting immigrants who don’t “pose public safety risk,” a move that reassured advocates who said they worried immigrants would avoid needed hospital care for fear of deportation. The federal government also said earlier that taking advantage of government subsidized tests and treatment for COVID-19 will not be considered among the factors that would disqualify Green Card applicants under a draconian new policy barring applicants who’ve used the national safety net.

In a sign that people appear to be taking the warnings seriously, the T is increasingly empty. The latest count from transit officials shows a drop in ridership of 78 percent as of Tuesday. The Massachusetts Nurses Association has called for even more reductions, urging the governor to mandate that use be limited to essential workers.

No surprises here. The state reports that as thousands have been laid off simultaneously, it had 19,884 claims in a single day, more than the entire month of February. Some bittersweet news, though, for those who are really suffering right now: A bill that will see unemployment checks distributed a week early to those impacted by the virus has been signed into law.

Nearly every grocery store and pharmacy around the state has now adopted new policies that make shopping available exclusively to those over 60, and many availed themselves of that opportunity this morning. Here’s a list compiled by WCVB.

Anticipating severe strain on the healthcare system, Tufts has already announced it will offer up some of its newly emptied dorms to house patients if and when hospitals run out of beds to house them. Harvard, as well as Middlebury College in Vermont, have made similar offers.

Yikes. Ignoring the advice of public health officials who are urging us to stay put, the well-to-do are flocking to an island with limited medical resources to weather the coronavirus storm. The Globe has more on this phenomenon.

Get a Load of This Picture

Ever think you’d long for the days when we still had traffic? Just me?

Another empty morning commute along the expressway in Boston. #coronavirus 📸@pictureboston pic.twitter.com/ciC5fRNNtO