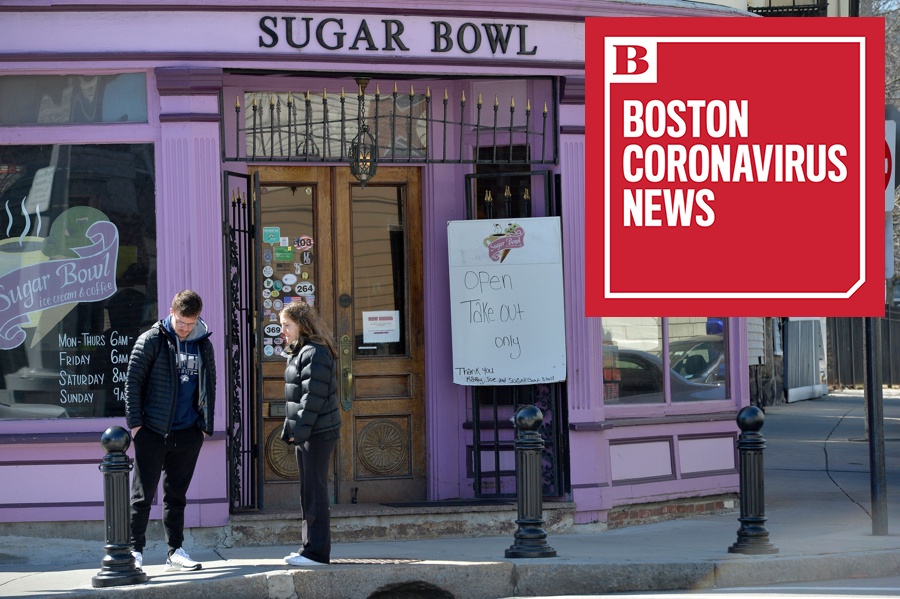 Two people wait outside the Sugar Bowl restaurant which is doing take out only during the coronavirus, COVID-19, outbreak in Dorchester, Massachusetts on March 22, 2020.  Photo by Joseph Prezioso / AFP via Getty Images

Citing a belief that it’s not appropriate to issue an all-out order to shelter in place, Baker on Monday announced he has asked the Department of Public Health to issue an “advisory” urging people to do what he’s been telling all of us to do for several days now: stay at home, unless you absolutely need to leave. He has also ordered non-essential businesses to close their doors beginning Tuesday at noon. The order does not close grocery stores, pharmacies, or restaurants offering delivery-only service. It does not halt the MBTA, but it does urge people to avoid the T unless, again, it’s absolutely necessary. It also does not apply to package stores, so no need to bum-rush them in search of last-minute booze. The full list of what is and is not considered “essential” can be found here.

After well-heeled vacation home owners headed out to the Islands in a misguided attempt to flee outbreaks in urban areas, Nantucket yesterday issued a shelter-in-place order following its first confirmed COVID-19 case. Baker has told people considering hunkering down in their second homes on Nantucket and Martha’s Vineyard to “stay on the mainland.”

If You Have Masks, Speak Up

In an attempt to meet the urgent need for masks before they’re inundated with patients, hospitals continue to ask for help with masks and other personal protective equipment wherever it can be found. A campaign to track them down, #GetMePPE, is ongoing, and especially crafty residents have even taken to rallying together and making masks of their own to contribute to the cause.

Mayor Walsh put an end to construction projects in the city last week, a move unthinkable only a few weeks ago amid a building boom, but necessary now due to the nature of this disease and how easily it spreads to people in close quarters. Cambridge did the same this weekend. But to the consternation of some in the industry, projects have continued in other cities, and have even continued in parts of Boston run by MassPort.

Work on critical infrastructure, including the T, will continue. Same goes for MBTA operators, who are needed to get essential workers to their jobs each day. In an effort to keep them safe, commuters are now being asked to board at the rear of buses and trains, and some helpful signage has been spotted on seats asking commuters to keep their distance from operators.

Heading to work at a hospital and the green line has just added these signs to the first two seats past the drivers seat. @mbta @universalhub pic.twitter.com/J5KWRCDhaV

The state prison system has seen its first positive case of COVID-19—a man at the Massachusetts Treatment Center in Bridgewater—which may be a worrying sign of things to come, given how closely packed together inmates are and amid outcry from advocates who say drastic steps need to be taken to protect them.

Trust me, you need to watch this incredible video, made by a Berklee student, of a “virtual orchestra” performing Burt Bacharach’s “What the World Needs Now.” We can thank Shelbie Rassler, a Boston Conservatory at Berklee student majoring in composition, for getting 70 of her peers to contribute their talents by playing instruments, singing along, and dancing, all while socially distancing from one another after their time in school together came to an abrupt end. Just spectacular.

Jeremy Jacobs Is Paying Up

This is about as close as we come to wielding pitchforks these days. After days of nonstop criticism from fans, as well as from Attorney General Maura Healey, TD Garden owner Jeremy Jacobs has agreed to set up a $1.5 million fund for the employees that keep the place running during the season, making the Bruins the last franchise to do so. Better late than never.

How People Are Feeling Right Now

A new poll from MassINC Polling Group and Blue Cross is giving us a look inside the heads of our quarantined neighbors, and it looks like people are rightfully pretty nervous right now, and worried about how long we’ll all be forced to live like this. Some good news, though? The vast, vast majority of survey respondents are treating this outbreak with the seriousness it deserves. Fully 88 percent of them said they viewed it as either “very serious” or “serious.” And most of the time 88 percent of us agree on just about nothing.

Especially with Bostonians flocking to parks in large numbers to ward off cabin fever, and as trips to grocery stores for food are still necessary, we are now our own personal security guards. The Globe analyzes this new collective germophobia in this relatable story about how we’re keeping the potentially infected masses at bay.

The Paywall Is Staying Up

If you couldn’t read that last recommendation because you don’t have a Globe subscription, it’s because the region’s paper of record is keeping its paywall up. We took a closer look at that late last week, including the Globe’s efforts to provide oodles of content for free while keeping its flagship paper subscribers-only, bucking a trend that has seen major newsrooms around the country offer their coverage of the pandemic to the public for free.

Given the low interest rates, buyers are apparently seizing the opportunity. “People are still coming out in droves wanting to see properties, and some of my busiest buyer’s agents are still super busy,” a real estate sales manager tells us.