What’s a Boston Sports Fan to Do?

For a city defined by its diehard Celtics, Sox, and Bruins fans, we’re in for a very strange spring. 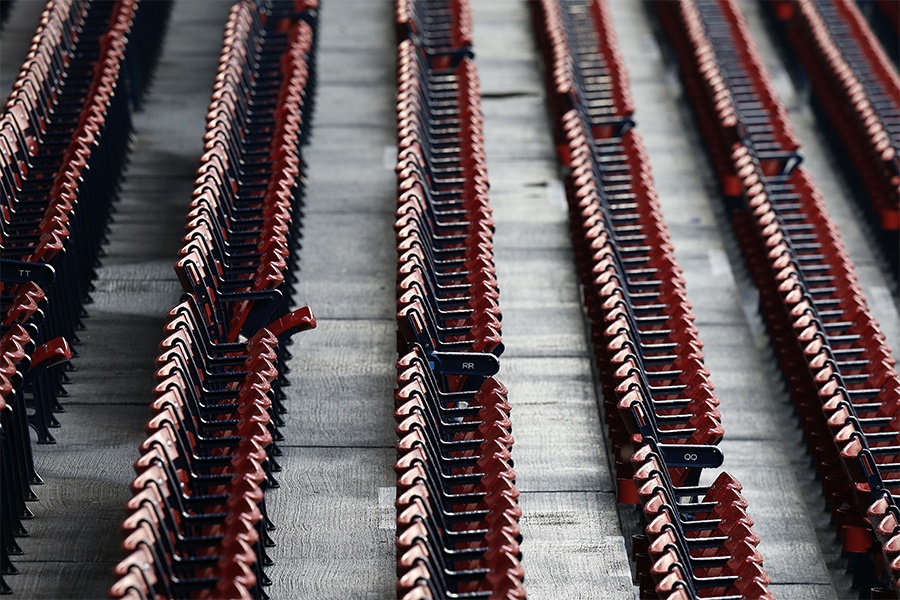 I often turn to sports in moments of great anxiety. When life feels most uncertain, there is something soothing about turning on a Celtics game and hearing Mike Gorman’s dulcet baritone narrate the play-by-play. Likewise, going to a game at Fenway Park and recalling those glorious summer nights in Section 31 with my father and cheering on the home team has always provided a certain amount of comfort. And for the past 20 years, no matter what was happening in my personal life, the one constant I could always count on has been Tom Brady’s winning ways.

Not anymore. Sports for Bostonians, along with everyone else forced into housebound exile, is on indefinite pause. For even the most casual enthusiast trying to cope with the citywide shutdown, there are no Jayson Tatum highlights to entertain us or Red Sox controversies to distract us. Every sports league has suspended play indefinitely in an effort to keep players and fans safe from the lethal COVID-19 bug.

The sudden cessation of sports leaves a hole in every community, but few more so than Boston, where athletes double as A-listers and sports heroes such as Brady, Belichick, Pierce, and Bergeron have been omnipresent figures in our daily lives and lexicon. Jack Nicholson doesn’t go to the Garden, but David Ortiz sure does. We’ve also had more than our fair share of moments to celebrate over the past 20 years, enjoying 12 total championships and 18 trips to championship games between the Sox, Celtics, Bruins, and Pats. And who could ever forget how Ortiz, more than anybody else, rallied the city together before a game at Fenway just five days after the Marathon bombings.

It’s nearly impossible to underestimate the power of sports in Boston and the kinship it creates. “It allows us to all have our common ally,” says Sports Hub radio host Tony Massarotti. “I don’t want to get too corny about it, but I think people in a community bond over that sort of thing. They can even bond when things go wrong. You run into someone at Dunkin’ Donuts, and they say, ‘Hey, did you see the Pats game on Sunday?’ I just think it’s a huge part of how people relate to one another.”

Boston Globe columnist Dan Shaughnessy agrees. In an increasingly fragmented world, he says, “The daily buzz being around the Garden during the playoffs, all of the restaurants and people cutting out of work early and being outside and interacting with each other, that’s the most fun part of this whole experience. That’s what keeps the engine running for a lot of us. I miss that. I remember the day of Game 7 with the Bruins and Blues. It was a beautiful June day. Everybody was outside. There was all of this confidence, and the region was just thriving and pulsating. You’re just not going to have that. It’s the twilight zone experience. We’re in the dead zone now. I just miss the liveliness.”

Even though there aren’t any games going on, at least there’s been some drama to keep our minds off of the harrowing news updates. While it was gut-wrenching to see Brady skip town, it felt good to once again fret about free agency and served as a reminder that life will eventually continue once we survive this crisis. NBC Sports Boston anchor Trenni Kusnierek says she was initially reluctant to spend much airtime focused on Brady’s decision to leave, but now she realizes it was a welcome reprieve. “I really do feel like the Brady story has given us sort of a lifeline during this time,” she says, adding she’s heard from friends who shared similar feelings. “I was really hesitant about having free agency go forward, but I got a couple of texts this week with people saying, ‘I’m so glad I got to watch something besides the news.’ I think people are already looking for an escape. They’re either watching Love Is Blind on Netflix, or they’re like, ‘What’s happening with Brady?’”

Fortunately for us, the Brady story has several subplots, including who the Patriots will now pick as his eventual long-term successor. The NFL Draft is still slated to proceed next month, albeit without any spectators. Our sports pages will not be barren and the role of the sports writer is not lost. “We’re going to be involved in a lot of things where we’re just looking to distract people,” Shaughnessy says. “People have more time to read now, and they have a lot of time to absorb stuff. So give them a reading list. Tell them to read Ball Four again, or go read the Belichick book by Ian O’Connor, or give them a sports quiz and see how good their memory is. I’m an old guy, so I can go in the wayback machine on some of this stuff. It is part of our job to inform and entertain people while they’re going through this time of isolation.”

But sports, of course, are about more than merely watching games and bonding with your friends—they also help support a local economic ecosystem. Even those who don’t know how many outs are in an inning probably carry at least one fond memory of pounding Bud Light at the Cask on a humid summer evening, and those who have never put on a pair of skates likely remember barhopping around the Garden before a weeknight Bruins game. Our restaurant industry is reeling right now due to the mandated closures of all dining rooms across Massachusetts for (at least) three weeks and some of our cherished game-day restaurants and watering holes may not be able to survive the time off. “Next to the deaths, the worst outcome of this virus is the financial deaths,” Kusnierek says. “There are all of these small businesses that rely on Marathon Monday, that rely on a Celtics playoff push, or even just regular season games and concerts. We could lose places that we’ve been going to for a long time. Maybe you always go to the same restaurant before you watch a Celtics game. That place might not be open when we come out on the other end.”

If we look to other areas of the world, there’s reason to believe that the pandemic will eventually slow and sports will begin again—though it may take far longer than we would like. Pro teams, for instance, are beginning to discuss resuming in East Asia, with the South Korean baseball league circling late April as a possible return date. Meanwhile, here at home where the virus is just taking hold, MLB commissioner Rob Manfred says baseball is targeting mid-May as its earliest possible date to resume play. The Boston Marathon has been postponed until September.

Still, the longer we stew inside our homes and stream yet another season of whatever on Netflix, the greater the feeling of joy and relief the next time you’re able to smell the outfield grass at Fenway, or even catch a passing glimpse of a Sox game on TV. Just think about the momentary euphoria you’ll feel when it’s announced that the Celtics are practicing once again. After all, if nothing else, when sports do return, it will come as a welcome sign to all that things won’t stay like this forever.