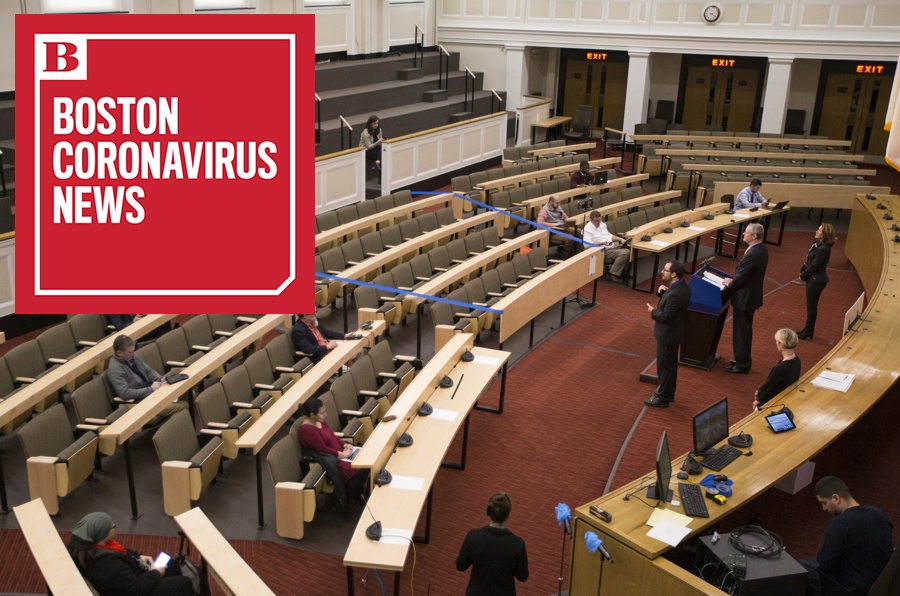 Confirmed Cases as of March 26

If there was ever a perfect encapsulation of how not to get needed, life-saving supplies to hospitals, it’s this: states and the federal government bidding against one another. So it makes sense that Charlie Baker would get this upset about his experience doing just that. “I stand here as someone who has had confirmed orders for millions of pieces of gear evaporate in front of us, and I can’t tell you how frustrating it is,” he said Thursday, and for those paying close attention, he came within inches of cursing on live TV.

A New Plea for Self-Quarantining

In yet another attempt to keep the spread to an absolute minimum, and with examples piling up in New York of just how dire the situation can get, and how quickly, Baker on Friday announced he’s asking anyone arriving in Massachusetts to self-quarantine for two full weeks. Earlier, travelers arriving from New York had been asked to do so—the request now covers everyone from everywhere.

The Tax Deadline Has Finally Been Moved

Tax preparers, not to mention taxpayers, can breathe a gigantic sigh of relief today, as the state has finally announced it’s extending its tax filing deadline to July 15, the same date federal taxes are now due. The move had been expected, because there was just no way for everyone to file in time given the circumstances.

The Toll for Health Workers is Mounting

I suspect that we will do this in time, but it’s my sincere hope that we meaningfully remember the extraordinary risk front-line health workers are taking while confronting this crisis, especially while there are still too few supplies to protect them properly. So far at least 150 people working at four Boston hospitals have tested positive for COVID-19. Officials at this point believe they contracted the disease outside the facilities. Essential workers of all stripes are putting their health on the line just by leaving their homes to get to work. Those of us who are stuck at home may be pretty uncomfortable, but being able to do so—especially if you’re able to work and draw a paycheck—is one hell of a luxury right now.

How to Get Your Stimulus Check Quickly

Assuming the $2.2 trillion relief package can eventually get the president’s signature, we can expect to see millions of checks for $1,200 (or less, depending on your income) distributed around the country. But if you want to make sure you see yours, you’ll want to be sure you’re up to date on your taxes. The Times answered some frequently asked questions about what’s coming.

The RMV Is Appointment Only

Remember all those outrageous lines, full of people standing well within six feet of one another, outside the RMV? Yeah, turns out that wasn’t all that smart. Now the RMV is being more proactive this time around, taking visits by appointment only beginning Friday. Here’s hoping the postponed rollout of the Real ID requirement means fewer people will fret about getting there.

Moulton is changing course, too. After he was inundated with criticism for joining a resolution critiquing China for its response to the coronavirus outbreak (can you imagine any part of the coronavirus situation in the U.S. that’s less important or relevant to the task at hand right now?) he is walking it back. The Congressman, who is himself recovering from symptoms of COVID-19, said he apologizes for supporting it, and says, “The way the resolution has been used is unacceptable to me.”

Look at the Mouth on John Kerry

He must be pretty mad, because we’re not used to hearing him spit fire like this. “Congressman Massie has tested positive for being an asshole,” the typically staid ex-Senator said in a tweet this morning about Kentucky Republican Thomas Massie, calling him a “#Masshole” who should “be quarantined to prevent the spread of his massive stupidity.” Massie has called for a voice vote on the stimulus bill, a move that would require the House to reconvene and could delay the relief package’s passage.

Breaking news: Congressman Massie has tested positive for being an asshole. He must be quarantined to prevent the spread of his massive stupidity. He’s given new meaning to the term #Masshole. (Finally, something the president and I can agree on!) https://t.co/N1CNLPsZjc

Not even gonna bother explaining the backstory on this one but in case you missed it here’s the president bringing up the (this hurts me to even type) ex-Patriot QB yesterday.

“Somebody in the fake news said, uh, that one of the governors said, ‘oh, we need Tom Brady.’ I said, ‘yeah.’ He meant that in a positive way.” — I have no idea what Trump is talking about pic.twitter.com/Kp2Xhv99Xq

The roughly 1,000 people who serve beers, Fenway Franks, and other food and drinks at Red Sox games—in other words, those who help make the experience of seeing the Sox as special as it is, are asking for help. But so far the team has not found a way to support those food service staff members, who are technically employed by a contractor. We talked to the union about the state of play.

The Artist Behind the Mask on the MFA Baby Head

If you’ve seen photos of the guerrilla art project at the Museum of Fine Arts, which saw giant plastic-wrap surgical masks placed on the MFA’s giant baby head statues, here’s a conversation with the artist responsible for it. It turns out the mask didn’t stay up for very long, but the creepy and arresting photos will live on.