Small Blessings in the Time of Coronavirus

I often wished this fast-paced city would just slow down. And then it did. 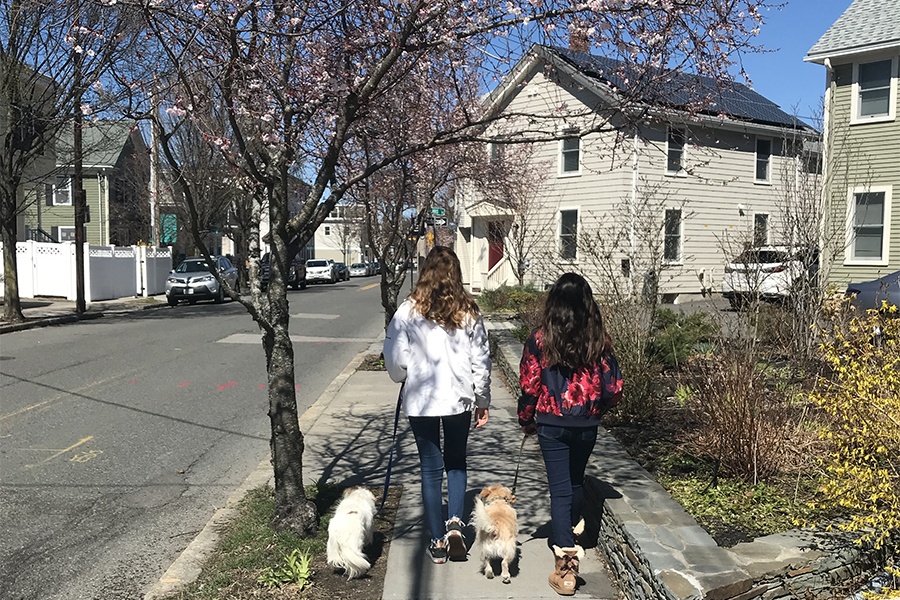 When I moved to the Boston area almost a year ago to the day, what most struck me was the constant motion and the speed with which people went about their daily lives. I had lived in the Boston area before, but had spent more than half of my adult life in Latin America and was just coming off a six-year stint in Lima, Peru. Until a couple of weeks ago, when the Corona virus sent us all home for the foreseeable future, I often found life in Boston to be rather overwhelming.

The pace seemed positively frenetic. No one, it seemed, had time to stop and smile, much less say hello—sometimes people I knew just waved frantically and kept on going. When they did stop to talk, or pick up the phone, I found my friends and I often fell into the trap of going on and on about all the things we had to do, talking at each other and reliving our to-do lists. People laughed, only half-jokingly, about how much they drank and which meds they took to cope.

A student of Buddhist meditation, I have long strived to live in the present. I haven’t always found it easy, though. In Boston, I found it nearly impossible. I was parenting alone, working a full-time job at an office in the Back Bay, and spending an absurd amount of time on public transportation to cover a ridiculously short physical distance to and from my home in Cambridge. On those wasted trips, when I was neither at home, nor getting my work done, I felt acutely stressed about how little time I was spending with my kids.

As I lay awake at night, my thoughts chipping into my already short window for sleep, I wondered how I was supposed to find the time to pay my bills, call the health insurance company, and do my own life. When my head became incapable of taming the ever-growing to-do list, I bought a physical agenda to jot them down. I derived a scary amount of satisfaction from crossing items off: call the doctor’s office to ask why I have been overcharged. Done. Yes!

Seeing that I was overwhelmed, friends reached out to invite me and my kids over for dinner some weeknights. But soon I found myself declining offers. I had made a ruthless calculation: Yes, having someone make us dinner would save me the time of actually cooking, but all that socializing afterwards would eat into the time I needed to do all of the many things that I didn’t get done during the day.

The obvious answer to all this, I thought naively at first, was that I would just do it all on the weekends. Maybe I’d even see my friends then, too. I quickly found, though, that when I tried to make plans with people on the weekends, it often involved numerous phone calls, failed attempts, and frustrations. We were all overbooked, overscheduled and overextended on the weekends, and only a miniscule portion of the time was devoted to leisure or relaxation. Instead, I was chauffeuring my kids to dance classes and horseback riding lessons while my friends seemed to be constantly driving from one child’s sporting event to another. I brought this up over coffee with a college friend who was in town from London during one of my first months living in Boston. As two Americans who have spent most of our lives since college living abroad, we were commenting about the state of affairs “back home.” He shook his head and sighed, his biscotti in hand, and told me, “In Europe, weekends are for adults.”

I don’t want to give people the idea that no one ever worked when I lived abroad. They did, they worked hard, especially the majority who lived in grinding poverty. Even some of the inexcusably wealthy have been known to work hard on occasion, too. But Peruvians have what I would call a deep love affair with play and a profound respect for leisure time, which includes the inviolable Sunday lunch with family. The locals work hard, so they can play and rest later. At the same time, I certainly don’t want to give people the idea I don’t like living in Boston. I do. But I have the feeling that people here work for the love of work. When people talk about how busy they are, how little sleep they got, or how hard they work, they aren’t always complaining. Busy-ness seems to have been elevated to a virtue here. Max Weber, of Protestant Work Ethic fame, would be proud.

As a result, I often wondered, Will this city ever slow down? Then, a couple of weeks ago, it did. Unfortunately, it took a global pandemic, but I’ll admit it that when it did slow to a crawl , I found myself breathing a deep sigh of relief. (Well, that is when I wasn’t worried my lungs were constricting with a Corona infection).

Before I go on a riff that will strike some as Pollyanna-ish, or worse, grossly insensitive and privileged, I’ll lay down some disclaimers: I am lucky beyond words that I have a job I can do from home. In fact, I am lucky I have a job and a home, for that matter. I am lucky that my two children are now old enough to make themselves breakfast and self-directed enough to do their schoolwork without my involvement. I am lucky that I live in Cambridge, where the schools have instituted a highly structured and organized program for distance learning, instead of some neighboring districts—here’s looking at you, Lexington—that have basically cut the kids loose.

With that said, I am incredibly grateful for the small, yet profound gifts this crazy time in history has brought to our fast-paced lives. I love that the city has slowed down, and that my children and I sit around the table together for lunch and then rise from our respective work areas for our afternoon constitutional. While out with our two dogs, we stop and chat with our neighbors on the block—granted from at least six feet away—and when we pass people on the sidewalk, they smile at us and say hi because they have the time, and perhaps the need, to do so. These days, there is something comforting about knowing that everyone we see as we walk down the block is actually our neighbor, because otherwise what would they be doing here? Modern city living has taken on a small town feel and an old-world charm. Suddenly, it all seems so civilized. Because no one knows what will happen next weekend, tomorrow, or even five minutes from now, there are no plans to make. We are all, finally, living in the present.

Despite the social distancing, there is a certain fox-hole intimacy in sharing a single experience with everyone in the city. I remember when I had cancer more than a decade ago, my friends and family were by my side, yet I felt alone in my fears and predicament. What pained me the most was the feeling that the world around me was still going about its business as if nothing had happened, while my entire life felt like it had crumbled. Now, rather than all of us being siloed in our own to do lists, or even in our own fears, we are all in the same boat, none of us sure what will come next. Somehow, because it is not just personal, the unknown seems so much more bearable.

I don’t know if I will sing the same tune two weeks from now, as more friends lose their jobs or, God forbid, people I love pass away. I’d be lying if I told you that those thoughts don’t terrify me. They do. It’s just that right now I’m not thinking about what might happen next. I am too busy living in the present.