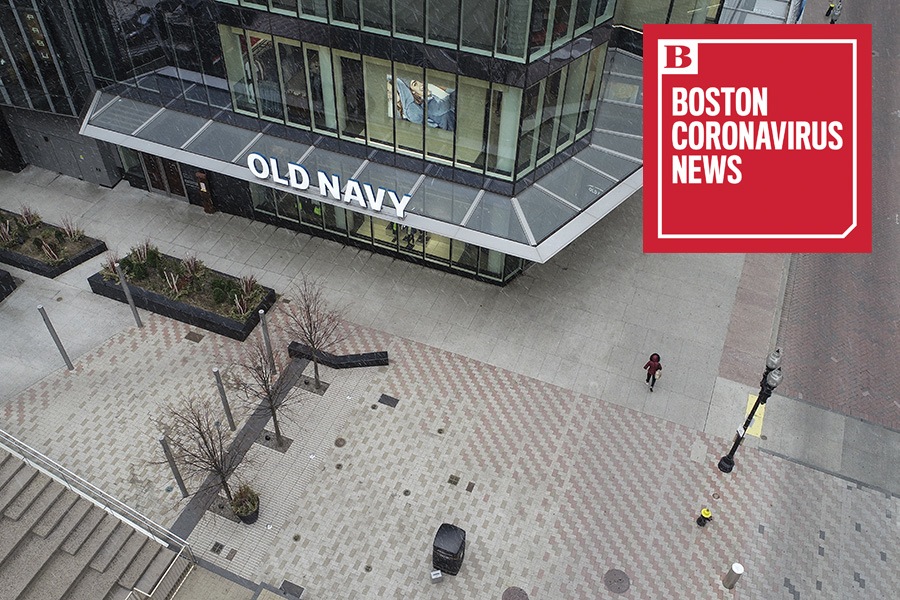 A lone pedestrian walks by Old Navy in Downtown Crossing in Boston on March 23, 2020. Photo by Blake Nissen for The Boston Globe via Getty Images

Note: This post originally had an incorrect number of deaths listed. It has been updated.

It’s Official: We’re Stuck Inside for Another Month

If you were among the positive thinkers who believed that life might return to normal this month, consider that dream dashed. Yesterday, Gov. Charlie Baker announced that his emergency order mandating the closure of all businesses and organizations that do not provide “COVID-19 Essential Services” will be extended until May 4. Gatherings of more than 10 people are now also prohibited until that day as well. So, while grocery stores and pharmacies will remain open, and restaurants will continue to provide takeout and delivery services, consider us pretty much homebound for at least the next month.

The Baker administration also announced yesterday that it has updated its list of essential services, and those changes go into effect today at noon. Health care providers like chiropractors and optometrists are now deemed essential, as have more workers who provide sanitation services. For more information on those changes, click here.

When health officials announced yesterday that 11 had died after a coronavirus outbreak at a state-run veterans home, the question on everyone’s mind was: How could this have happened? One day later it’s still not entirely clear—but the accusations are swirling.

Yesterday afternoon, Holyoke mayor Alex Morse said Soldiers’ Home staff did not notify city or state officials last week after eight residents had died. “On Sunday I directly reached out to the superintendent of the facility, Bennett Walsh,” Morse said. “I was shocked on the phone call when the superintendent had let me know that there had been eight veteran deaths between Wednesday and Sunday without any public notification, without any notification to my office, and also no notification to the state government, which oversees this facility in the first place.” Walsh has since been placed on administrative leave.

In a statement, the state’s Executive Office of Health and Human Services told WBUR that the appropriate state and local officials were told of the deaths.

In a press conference yesterday, Gov. Baker became emotional when he spoke about the tragedy. “We will get to the bottom of what happened and when,” he said. “We will figure out what happened, and we will deal with that.”

As hospitals scramble to build capacity for coronavirus patients, they’ve had to cut elective surgeries and appointments to make way—and have taken massive financial hits as a result. Boston Medical Center announced yesterday that 10 percent of its workers, or about 700 people, will be furloughed in response to the hospital’s loss in revenue. The furloughed workers, who are mostly administrative staff in departments where the workload has dropped, will “remain in active status with the expectation of returning,” per a statement from the hospital’s chief executive, Kate Walsh. “These are valued BMC employees we just don’t have any work for,” Walsh told the Boston Globe. Walsh also said she will give up her paycheck for at least a month, and that other executives at the hospitals will see reduced pay for the next three months.

Other medical groups, including Atrius Health and Steward Health Care, have also announced furloughs. Additionally, Beth Israel Lahey chief executive Dr. Kevin Tabb has announced he will take half his salary for the next three months, and that other executives will see pay cuts.

Boston Calling Calls It Off—

Sorry Rage Against the Machine, Foo Fighters and Red Hot Chili Peppers fans: The festival, scheduled for May 22-24, is officially off and will not be rescheduled this year. Ticket-holders will soon be offered refunds. Read the full story here.

—And Mass Dems Probably Will, Too

Approximately one million years ago, Congressman Joe Kennedy III announced he would challenge incumbent Ed Markey for his Senate seat. Normally, delegates would have voted to endorse either Markey or Kennedy at the Democratic state convention—but since that would require a pretty big group of lawmakers to flout social distancing protocols and gather together, the party is moving to cancel the May 30 event, and all local caucuses that did not already take place. The Chairman of the Massachusetts Democratic Party, Gus Bickford, announced yesterday that he will seek approval from the Democratic State Committee to not hold the convention, declaring Senator Markey the winner and Kennedy surpassing the 15 percent threshold. If the recommendation is adopted, Bickford will request that both Markey and Kennedy’s names are placed on the Democratic Primary ballot for United States Senate. “While it is unfortunate that the current circumstances do not allow for our annual gathering of Democrats, this is the right decision for the Party to make,” Bickford said.  “Our duty to protect one another, to protect our friends, family, neighbors and strangers, requires that we all make changes to the way we live.”

The plan was made with approval from both the Markey and Kennedy campaigns. “The Massachusetts Democratic Party has been responsive and responsible in each of its decisions during this difficult time, prioritizing the protection of the health and safety of all involved,” the campaigns’ managers said in a joint statement. “On behalf of the Markey and Kennedy campaigns, we support the solution that the party has proposed.”

Mass Dems made the right call to cancel our convention.

The health and safety of everyone is priority #1.

Grateful to the thousands of volunteers who joined our team throughout the caucus process.

Stay healthy. Stay safe. We will get through this together. Then on to Sep 1st!

The former Patriots tight end and his girlfriend donated 10,000 medical-grade KN95 masks in an effort to meet increasing demands for medical supplies in the state. The couple also donate 10,000 masks to St. Joseph’s University Medical Center, where the husband of MJ Day, the Sports Illustrated Swimsuit editor-in-chief, works as a physician. Kostek was the cover model for the magazine’s 2019 edition. “What Camille and Rob have done for this hospital, the caregivers, the patients, and the community made me cry tears of joy,” Day penned in an emotional Instagram post. “It’s been restorative to my faith that we can make a difference no matter how big or small.”

So when we all say we are a FAMILY at @si_swimsuit I mean it in the truest sense of the word. @camillekostek is a former #siswimsearch winner, SI Rookie and 2019 Cover Model. @gronk is her partner in life and @patriots legend and friend and supporter of this brand. They just donated 10,000 KN95 masks to both @sjhnj and @bostonmedicalcenter. And I am moved beyond words. But this type of generosity deserves words. On a personal note, I have been appealing to people to #stayinandsew #flattenthecurve and support their local hospitals and caregivers in need. My husband is a physician at @sjhnj and many of our friends and colleagues are on the front lines there fighting this pandemic. Like many of the hospitals in the epicenter of this war, they are critically short on supplies. Especially masks. What Camille and Rob have done for this hospital, the caregivers, the patients, and the community made me cry tears of joy. It’s been restorative to my faith that we can make a difference no matter how big or small. It shows me that the type of people that I get to work with care about me and you just as much as we care about them. And no matter what team they played for, we are all on the same team now. There is no way to quantify the gratitude I have for you both. Let’s motivate others to do the same, or what they can to help our hospitals and caregivers battle for us. Make a mask, stay home, donate, use your platform. Do what you can, because it all matters. These masks equate to lives saved. Period. Thank you. ❤️