Stories to Give Us Hope This Week: Teddy Bear Scavenger Hunts, John Krasinski, and Mask Donations

Not everything is bad right now, so here's a needed dose of good news. 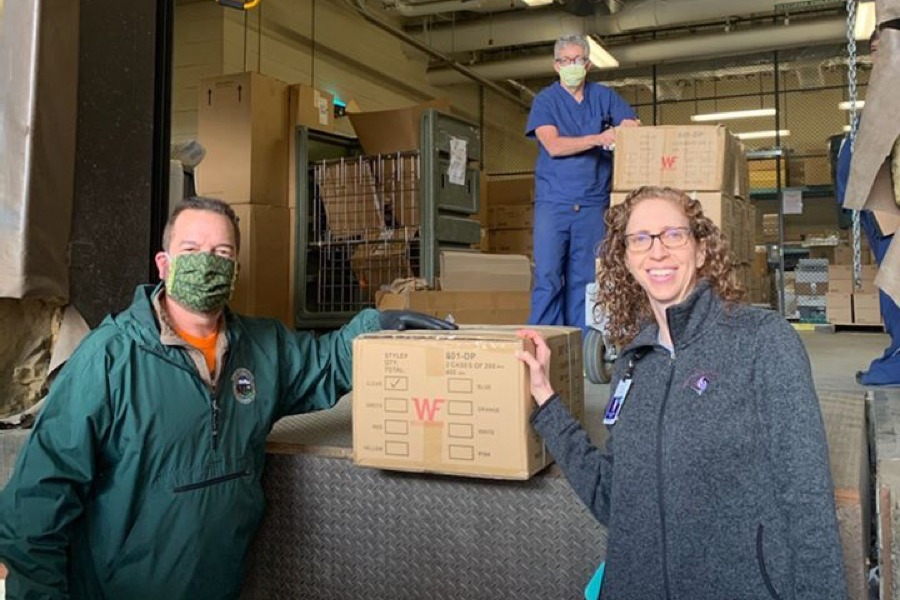 Last week, we wrapped up a difficult couple of days with a roundup of some news that did not fill us with angst and dread—namely, news involving Bostonians who were really rising to the occasion, and in so doing gave us reason to hope. Needless to say the news is not getting much better right now, and despite the heroics of our front-line health workers and other essential workers, some very difficult days lie ahead. So it’s time for some more good news! Once again, a selection of the people doing good things in and around our locked-down city.

A Facebook group is calling for Bostonians to follow the example set in London and New York, and lead cheers for healthcare and other workers tonight at 7 p.m. People tasked with working in essential positions while many of us are able to stay home have said these small gestures mean a lot. So consider giving them a hand.

Everyone from the Boston Athletic Association to Gronk are putting the critically needed masks they have in storage to good use, donating them to the frontline health workers who need as many as they can get their well-sanitized hands on. Turns out, you don’t need to have a Patriots-branded 767 to get PPE where it needs to go.

Can’t say enough about how the industry is banding together right now, as are so many of those who in better days spend their idle time eating and drinking at the city’s bars and restaurants. We’ve made a list of all the fundraiser and initiatives that have together raised hundreds of thousands of dollars laid-off workers struggling to pay the bills, and delivered countless meals to hospital staff and people in need. Chip in if you can.

Just because we have to stay apart doesn’t mean we can’t find ways to do nice things.

Mrs Murphy told me “no more chocolate covered donuts” so today I surprised her with a Coffee Roll ! 🍩 Everyone needs one on a rainy day like today! Miss hugging, sitting down & talking politics with her over coffee. Can’t wait until we can do that again. ❤️🙏🏻 @kleegs314 pic.twitter.com/I17P4lJVLZ

If you think all of this is hard for you—presumably, a grown-up with some perspective on why you can no longer see your friends and family or go out to eat—just imagine how hard it is for kids. So to bring some joy to all the cloistered little ones out there, neighbors have begun taking part in games for children while they’re out for socially distant walks. Some have begun putting teddy bears in their windows for the little ones to spy.

Others are putting up crafts on display, just to brighten up the daily walk a bit.

Neighbors across the street have little kids. They keep putting hearts in the window for people to see on their walks. 💕 pic.twitter.com/UtDuuazvrR

And while we’re on the subject, shout out to the shuttered Boston Public Library for this cute idea for keeping the kiddos occupied.

Stuck inside with the kids? The @BPLBoston Children’s Library wants you to build an epic fort — and then shares pictures with them https://t.co/QJHJVUlVTs

We’ve got our share of billionaires in the region, and many of them are stepping up to do their part as we navigate this crisis, be it with big donations, creative ideas, or some clutch logistical help.

The Newton native is doing the whole “good news” thing, too, and it’s admittedly cheesy, but I think a necessary addition to this otherwise horrific news cycle. After 25 million people watched his first video, he’s apparently now at work on a follow-up.