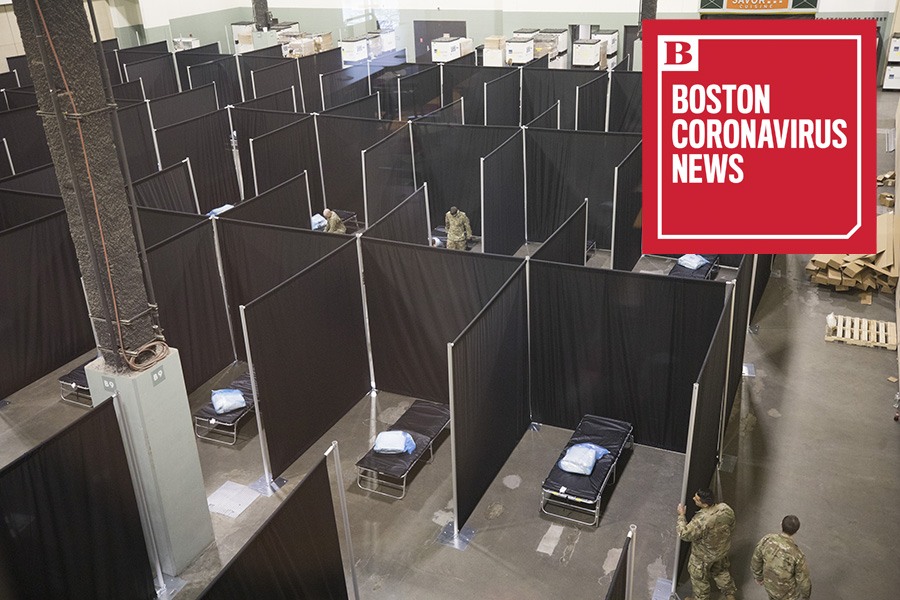 Members of the Massachusetts National Guard erect a medical field hospital at the DCU Center in Worcester, Massachusetts for the expected influx of patients due to the COVID-19 pandemic. (Staff photo by Nicolaus Czarnecki/MediaNews Group/Boston Herald)

There are still a lot of unknowns in our future—but thanks to some new modeling by medical experts, we now have a better sense of what might be coming down the pipeline for Massachusetts. Yesterday, Gov. Charlie Baker announced that those models, based on the Wuhan outbreak, project that hospitalizations for the virus will likely peak in Massachusetts between April 10 and 20.

What needs to be done over the next week to prepare for that surge? To prepare, the state needs more ICU beds, more hospitals, and more ventilators. Hospitals are currently working to expand their ICU capacity, while the Baker administration is trying to find or build an additional 750-1000 beds in field hospitals and other alternate care sites to reduce the strain on those hospitals. The Boston Convention & Exhibition Center has been identified as a possible site for one of those field hospitals, and the Baker administration says a contractor has been secured who can convert the site once a healthcare partnership is finalized.  Other sites, like the DCU Center in Worcester and Carney Hospital in Dorchester, have already been converted. “Even with the best planning, we still expect our medical system will be stretched,” Baker said.

The advisory panel Baker assembled also estimates that between 47,000 and 172,000 residents, or about 0.7-2.5 percent of the state’s population, will be infected over the course of the entire epidemic. As a reminder, the state is tallying just under 9,000 cases today.

A machine that uses concentrated hydrogen peroxide vapor to sterilize up to 80,000 respirator masks a day is coming to the city, thanks to a partnership among Partners HealthCare, the city of Somerville, and an Ohio-based nonprofit called Battelle. The machine, which will be owned and operated by Battelle, will be located at the former Kmart at Assembly Row, near Partners’ corporate headquarters. This will be the fourth site of this technology in the country. The Boston Globe has more of the details.

My full statement on this –

We’ve got to move fast and be nimble to handle the coming coronavirus surge. It hasn’t even been a week since Battelle’s technology got approved by the FDA. 1/ https://t.co/97ludhth8Z

In this case we’re able to put technology into production that’s going to protect the frontline healthcare workers who are protecting all of us. 3/

Reminder: We Are Not on Summer Vacation

To reduce the apparently large groups of people who have begun descending upon the state’s beaches lately, the state is closing the parking lots at all the beaches the Department of Conservation and Recreation manages. “In this particular case, we got a lot of input from a lot of places that people were not treating any of the distancing rules at the beaches the way they should have been,” Baker said at a press conference yesterday. “And our solution to that is if people can’t play by the rules, if it’s too big a temptation, then we’re just going to get rid of the parking.”

You can still walk to the beach if you choose, but, Baker says, “you better be sure you abide by the rules associated with social distancing.” Per the emergency order, that means no athletic activities, no sitting, and no sunbathing. You can, however, partake in “passive recreational activities that involve transitory movement” and also “solitary beach fishing.”

Baker has repeatedly emphasized the importance of getting outside, however, and is also providing more opportunities for people to do so, at a safe social distance. Yesterday, the Administration announced that the DCR will open some seasonal state parks a little early and expand access at others in an attempt to provide additional space for people who want to get some fresh air. Parking at these state parks, however, will be reduced.

And If You Keep Flouting the Rules, There Will be Consequences

“I don’t want to issue fines, and I don’t want to send police officers out, but we are prepared for these steps because if we don’t flatten the curve now through voluntary measures, those steps will be inevitable,” Mayor Marty Walsh warned in a press conference yesterday.

Arts and Culture Orgs Are in Big Trouble

As we all turn to music, movies, TV, books, and crafts for comfort inside our homes, the organizations in the state that support creatives and pay tribute to the arts are being devastated by the pandemic. In a Thursday call, State House News reports, leaders in the state’s arts and tourism sector painted a grim picture of the industry—per the Massachusetts Cultural Council, the state’s nonprofit cultural organizations have lost more than $55 million in revenue already as a result of the outbreak. While many are tapping into their endowments and making difficult budgeting decisions already—North Adams’ Mass MoCA laid off 122 of 165 staff members—representatives of these organizations say they  won’t be able to return to normal without government assistance. “This is a key moment where we’re trying to figure out the future together,” MFA Director Matthew Teitelbaum said. “We need the support of government. I speak on behalf of all cultural workers, but we also want to support you. We want to help you as you think about how tourism comes back to our state, how education systems become robust again.”

Doctors, nurses, first responders, grocery store and pharmacy employees, and other essential workers have kept the city going as most of us have retreated indoors—and tonight, we have a chance to show our gratitude. Tonight, Massachusetts residents are encouraged to partake in #ClapBecauseWeCare, a citywide round of applause that took off in London and in New York City. The instructions are simple: Open a window or door at 7 p.m. and clap and cheer for five minutes, in honor of those people on the front lines. “We know how to come together in challenging times,” the Facebook event reads. “We’re in this together—we’re Boston Strong!”