An "essential" member of the bakery department at a local grocery store shares her experiences—and what she wants customers to know. 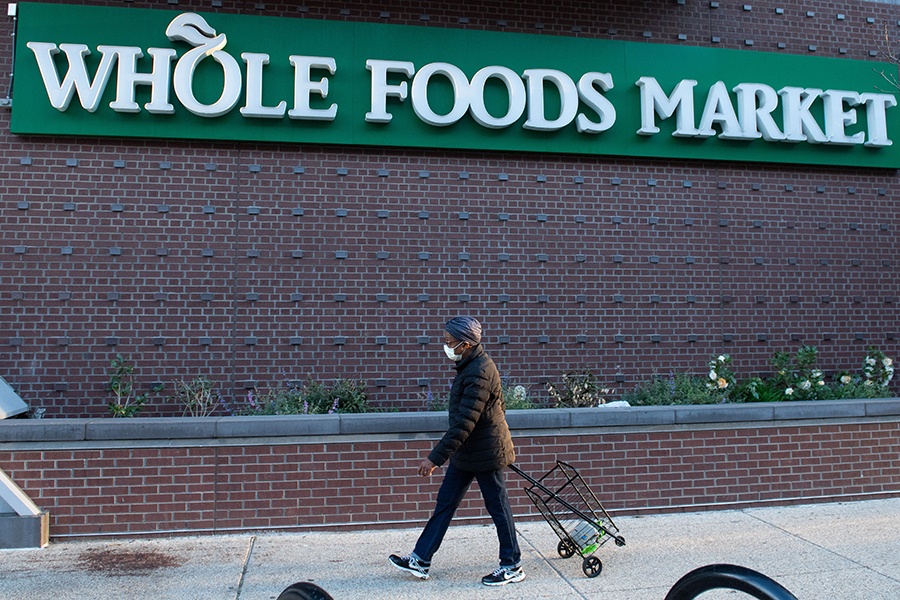 A woman walks into a Whole Foods supermarket during hours reserved for customers 60 years and older to minimize contact with others as people social distance due to the outbreak of the coronavirus, at a store location in Washington, DC, March 20, 2020. / Photo by Saul Loeb / AFP via Getty Images

For one five-year Whole Foods employee in Boston, the past few weeks on the job have been at once slower than ever before, and also more stressful. The full-time cake decorator, who Boston magazine has allowed to anonymously share her candid experiences, reports to work in the bakery department five days a week, though the orders for the products she makes are evermore infrequent. She’s happy to be allowed to finish her shifts early when possible, and return home; but she also wants to continue to go to work—and get paid—for as long as possible. That will mean staying healthy. Here, in her own words, the cake decorator describes what it’s like to do her job during the pandemic.

I tend to work early shifts, so I’ll get there around 7 a.m. I’ve been doing laundry so much, just to make sure that I have on something clean to wear every time I go in. I’m trying to remain positive at the beginning of my day so that I can stay positive throughout. I have a couple phrases that I like to say to myself, like “mind over matter.”

When we open at 8, it’s an hour of shopping for seniors only, so there’s usually already a line outside by the time it’s reaching 9 o’clock. I think that everybody has this idea that if they go in as early as possible, they’ll get there before everybody else does, but I have been finding that the store has been pretty empty after 12 o’clock.

We just implemented the six-foot distancing policy with decals of footprints. They have signs up on all of the shelves and the aisles, and up on the deli case, encouraging you to stand six feet apart from each other, and six feet away from the counter. It still gets pretty congested at times, because everybody has to distance themselves. When things get a little congested, usually someone from the leadership team will be up front controlling the lines. They haven’t officially started limiting the amount of people in the store.

Everybody’s wearing gloves. I’m trying to follow the same standards that I did before: You switch your gloves between every task. If you touch anything that’s not your work surface, if you touch yourself—anytime you cross-contaminate, you have to take the gloves off, wash your hands, and put on a new pair of gloves. So, my hands are very dry right now. They’re cracking. I have, like, dinosaur skin.

About a week ago, they put up plexiglass barriers on the registers. You can’t get anything self-serve or loose; everything is prepackaged now. So, a lot of what we’re doing in the morning is getting all of our supply in and prepackaging every single product that we’re selling—except for the cake case, but I suspect that could change any day now. 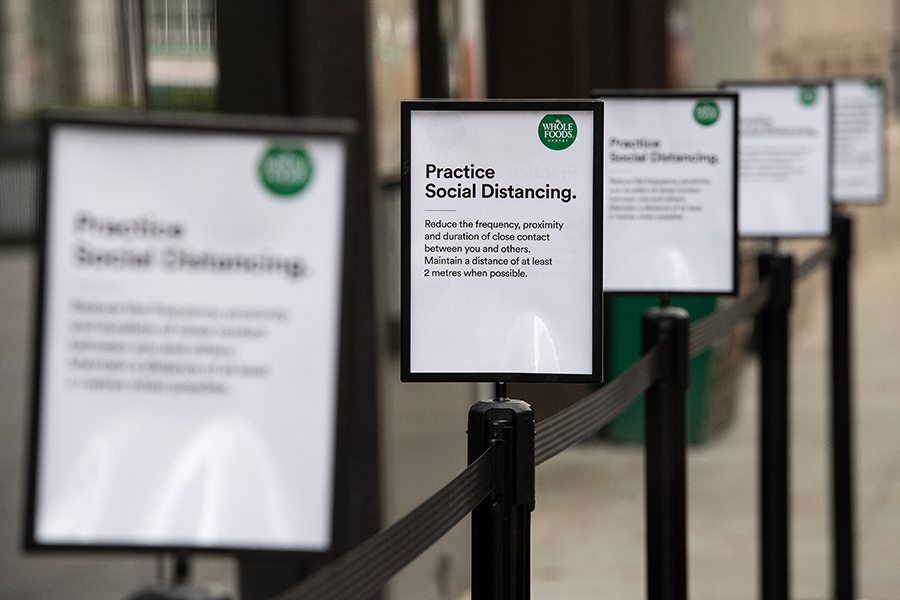 Signs explaining the need for social distancing while queueing are seen outside a branch of the Whole Foods health store on March 30, 2020 in London, England. / Photo by Leon Neal/Getty Images

We’re not taking any custom cake orders right now. I spoke with somebody on the phone last week, and they were looking to place an order for a cake because they were supposed to get married, and they had to cancel it because of everything that’s been going on. I felt really bad that I couldn’t make the cake that they wanted to get. But, yeah. There’s not really a lot of business for cakes right now.

Our orders are getting smaller and smaller everyday, so it’s this weird in-between of not being busy, but there’s also the stress of everything else that’s going on. There are things that I do make in-house, like all of the strawberry shortcakes. I can never make enough. Even now, it’s the one thing that everybody still wants to buy.

When I started working for Whole Foods, I was in customer service for a couple of years. I do know how to ring on a register, but I’ve been trying to avoid that. It is possible that they will ask me to do it, but right now, the customer service department is the most staffed department in the entire store. We’re very short-staffed in the bakery right now. We had a couple people hired as part-time who were also in school, and they had to leave, unfortunately. Speaking as somebody that used to be a cashier, I can’t imagine what it must be like being a cashier right now. On a busy day, you’d probably deal with hundreds of people.

I’m not entirely sure how many people called out [for the “sick out”], but I called out. I’m trying to be at work as little as possible, and also felt I needed to participate in the sick-out. It wasn’t really talked about by any of my coworkers while at work, but I did see a lot of posts about it on Facebook.

Everybody at the store is trying to be as supportive as possible for everyone else working, but we also have to keep our distance too, so it’s tough. We’re taking care of each other and other ways. The prep foods department has been making food for everybody, because they’re not running the hot bar or the salad bar, so they have all the food that would otherwise go to waste. I’ve been sent home with free food a couple times, which I’ll share with my roommates. But my department is so small right now that the interaction is kind of limited between everybody.

The communication could definitely be better. That’s not something that was any different before this, but right now it’s a lot more important. It’s up to the team leader of the department to make sure that everybody knows what’s going on. I’ve really had to pry my team leader to get information, because they don’t really announce it in a way that will reach everybody. I don’t know if that’s the same in every department.

Right now, I’m taking it one day at a time, but hypothetically, they could have to shut down. If somebody that I worked with was to test positive for the virus, we would all have to self-isolate for two weeks. I just found out that we will be getting paid for that amount of time, even if we’re not showing any symptoms. I was stressed about that for a while. I kept trying to get a more concrete answer, and I think that they were just working it out.

It’s not required for us to go get tested unless we are experiencing symptoms. If we’re experiencing symptoms, we need to call out of work and get tested, and we can’t come back to work until we’re confirmed negative. It’s still unclear if we will be paid for the time we have to wait to get the test results back. Also, the time between the person getting tested and hearing the results back is a lot of time for everyone else on the team to still be working and not knowing if they have also been exposed, right? I’m not sure if I should share this with you on the record, but what the heck. Stores in Boston already have team members staying home until they get tested.

At first, I felt like we were discouraged from wearing face masks. Like, “It’ll just freak people out.” But now, team members are starting to wear them anyway, and it seems like we’re not going to get in trouble if we do. They’re not providing masks for us. We have to bring our own if we want to wear them. My partner just sent me some that they made, so I have a couple of re-washable ones that I’ve been bringing with me, mainly for just when I’m on the floor. When I’m in the cake decorating area, I’ll be by myself.

My biggest concern is customers respecting our personal space, too. I’ll have to go and get strawberries and other things from the produce department for what I have to do in the cake decorating area, and it can be hard for me to get around the store to do my job. If customers have a question that they need to ask me, they often get up way too close for me to feel comfortable. I’ve noticed that that’s been happening a lot: People forgetting that we’re supposed to be socially distancing ourselves right now, because we’re not accustomed to it. I want it to be like I’m in a bubble. Like, I can answer whatever question you have from six feet away, because I want to remain working as long as I can.

I have two roommates, and we’re all considered essential workers. We’re still going to work every day and then coming home. We’ve kind of just accepted the fact that we’re probably going to have to quarantine at some point, because one of us is either going to get it, or come in contact with somebody at work that has been exposed. We’ve had that conversation already. I had to make that personal choice to not try to see family members, or my partner. I haven’t seen my parents. I go straight from work to home, and I don’t go anywhere else.

Collectively, I feel like grocery store workers would like to say to customers right now: Stay at home unless it’s essential. Go grocery shopping for a week. I feel like we’re still getting people coming in every day and kind of just browsing. That shouldn’t really be happening right now.