Our New England stars are giving us all a look at their lives in quarantine. 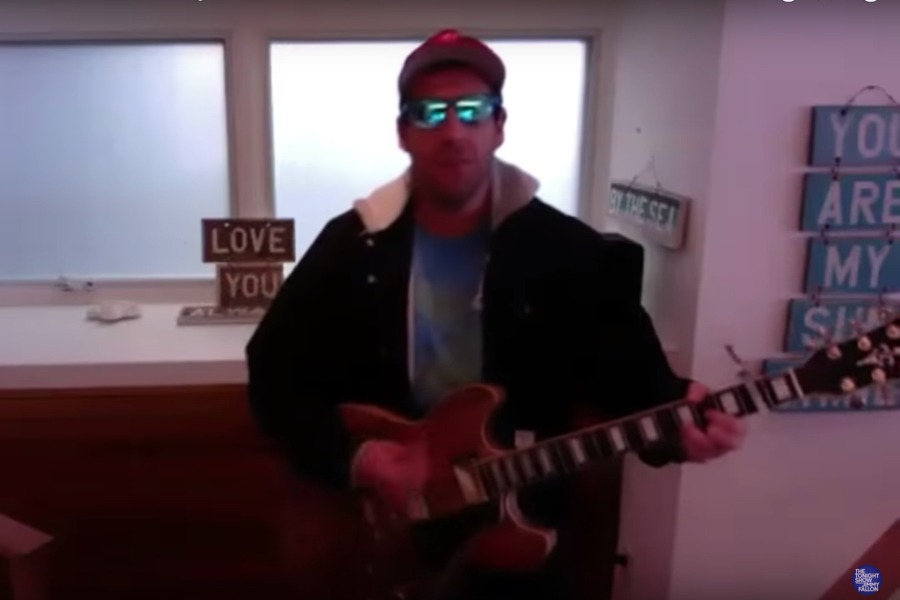 Celebs are typically not, despite what their publicists would have us believe, just like us. But these days the rich and famous are just as cooped up as the rest of us, even if they’re doing it in their estates in the Hills. So as all the actors and musicians have tried to find ways to occupy themselves over the past several weeks of self-isolation, many have sought to reach their fans via livestreams. It’s given us a necessary dose of some familiar faces in this time of need, and it’s also offered a look at the stars in oddly compromised positions, giving us a glimpse of their hairdos at a time when their stylists can’t come within six feet of them, showcasing their shittily decorated basements they now have to clean themselves, and putting their chops as entertainers to the test with noticeably lo-fi equipment.

It’s been a delight. And with this rare chance to see more or less unguarded moments, here are some local celebrities, coming to us live from quarantine:

He’s still got it. The Uncut Gems star and New Hampshire native has a cute and funny new coronavirus-themed song, which he performed on a video conference call for Jimmy Fallon’s filmed-from-home late night show. But you gotta be charmed by seeing him do so on the junkiest little amp I’ve ever seen, in front of those beach house wall hangings that are in every Cape B&B. Two million people have watched this video and seen Sandler’s Pier One decorations.

The fact that he can have such a viral smash hit of a video series focused on Good News, and do so while sitting behind an improvised table held together with duct tape, and with an arts-and-crafts project as a backdrop, really speaks to how charming this guy is, Hollywood production or no Hollywood production. Guess it does help when you have famous friends, but still.

A HUGE thank you to @Lin_Manuel and the entire cast of @HamiltonMusical for coming on @somegoodnews and bringing Aubrey (and all the rest of us) a much needed smile!!!https://t.co/BoQStY9fj2

If you expected palatial settings for Seth and Amy’s SNL reprisal on Late Night, given they’re two of the best-paid comedians on the planet, guess again! Looks like these chats took place in above-average Somerville apartments and we are here for that as well.

Even Spenser Confidential himself can’t get out of doing some girldad things in quarantine.

Mark Wahlberg going to come out of this quarantine looking like a brand new man pic.twitter.com/KfiEQyN2Xf

Having formerly starred as the hero in a movie about a pandemic, Matt Damon lends some Hollywood gravitas to this important PSA about listening to experts about social distancing. But doing it with some outrageous bedhead really makes it that much more relatable, given all of us look like trash most of the time these days, so thanks for the courtesy, Matt!

“Contagion” star Matt Damon explains why we must listen to the experts. pic.twitter.com/CUtREYx5wo

She’s been doing photo shoots of herself both lazing around and doing mom things. She is good at it!

When you say you’re going to help your kid build but then you get impatient and completely take over pic.twitter.com/VLYs6EzAYP

When you have a universal remote but yet there are somehow still 20 remotes pic.twitter.com/DW08ZqAWf3

If only I hit my daily writing and showering quota as much as my napping quota pic.twitter.com/PshJugIyBj

Here he is juggling in what appears to be paradise. Is it surprising that Gronk can juggle, or that if you trapped the human golden retriever indoors for a couple weeks that he could find a way to entertain himself with a fresh pack of tennis balls? No and no.

Learning new tricks during these times. Just cause I am locked down doesn’t mean I ain’t open!! Juggling balls 🎾 cause why not! Inspired by my @monsterenergy family to find new moves while bringing the fuel, while my MOMMA rolling the 🎥 and wiping out! #crushquarantine

Where is he? Is this what Steven Tyler’s home looks like? Is he about to have his fortune told? What is he doing? I don’t know! Just get the fuck out of his face apparently!