If Liquor Stores Are “Essential,” Why Aren’t Marijuana Dispensaries? 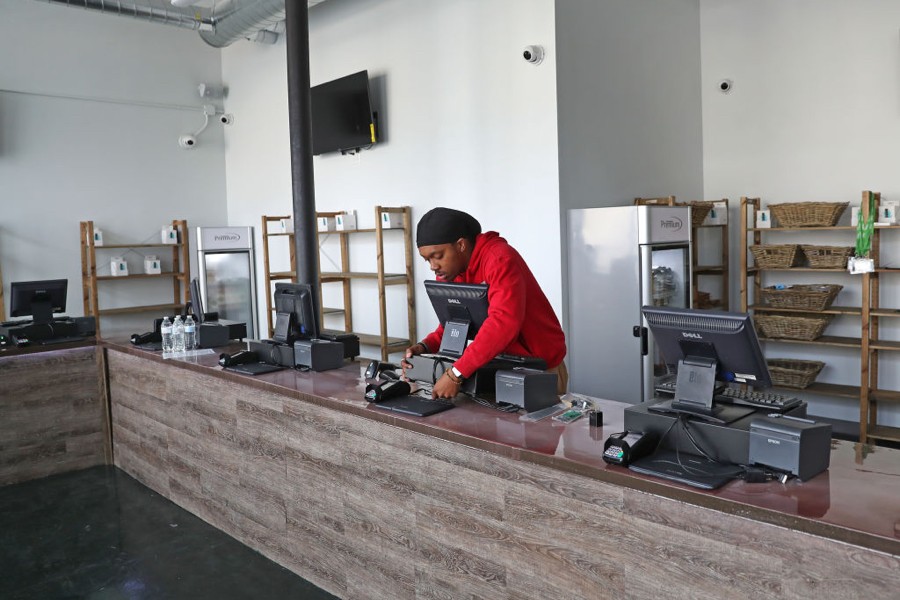 Massachusetts’ cannabis industry has spent years pushing the state to treat marijuana more like alcohol. The campaign that advocated for legalization via statewide ballot question in 2016 even named itself after that very concept, calling itself Campaign to Regulate Marijuana Like Alcohol. Since then, of course, ample progress has been made: Dozens of dispensaries are now open throughout the state, and new locations  these days no longer open with much fanfare or controversy. If everything goes according to plan, it’ll soon be just as legal in Massachusetts to open social consumption sites for using cannabis as it is to open a bar, and just as easy to order edibles to your door as it is to hail a six-pack on Drizly. We’re not there yet, but by early 2020 we were inching closer day by day toward parity between the two substances.

That is, until the coronavirus pandemic hit. Last month, Gov. Charlie Baker drew a big red line between weed and booze, declaring liquor stores “essential” during his stay-home order, but not recreational-use pot shops. His decree stated that only medical dispensaries can continue to sell the drug, and only to patients with medical ID cards. So for adult-use customers and the shops that serve them, the burgeoning marijuana industry that locals are coming to count on came to a sudden, frustrating halt. And as a result, five licensed marijuana dispensaries and one veteran cannabis user are now making this a legal matter: On Wednesday, they filed a lawsuit in Suffolk Superior Court alleging a breach of the equal protection clause.

“In many ways, it’s like we’re reliving the campaign,” says Jim Borghesani, the former spokesman for the Campaign to Regulate Marijuana Like Alcohol. “We are arguing for equitable treatment of cannabis, specifically in the same way the state treats alcohol. And we once again have a governor who is opposing that philosophical approach.”

Baker has explained his decision by saying he fears adult-use pot shops would attract customers from out of state at a time when he is trying to limit travel, and has urged anyone entering Massachusetts to self-quarantine for 14 days. Pestered further about this Wednesday at an afternoon press conference, he doubled down on his previous position and said he was more focused on managing the state’s expected surge of COVID patients than amending its list of essential businesses.

Members of the cannabis industry argue that it’s well within Baker’s power to limit sales to Massachusetts residents only, and notes that dispensaries are perfectly capable of enforcing such a rule. “At every dispensary you have to show ID to be age-verified anyway, so it would be very easy to determine who’s coming from outside the Commonwealth,” says Joe Lusardi, CEO of Curaleaf Holdings, Inc., the marijuana giant that operates dispensaries in 17 states and here at home runs shops in Hanover and Oxford that serve both medical patients and adult-use customers. “I don’t think that’s something that’s insurmountable.”

Lusardi says dispensaries have also demonstrated they can operate just as safely as restaurants, which have continued filling takeout orders during the crisis. His company’s shops in Massachusetts have already instituted curbside pickup, online ordering, and other safeguards beyond those found at most liquor stores.

So far, every other state with recreational marijuana retailers, including Colorado and Michigan, has allowed them to stay open as so-called essential businesses despite broader shut-down orders, and the economic consequences of the governor’s novel approach to weed are obviously calamitous. While many dispensaries in the state have both medical and recreational licenses, the Commonwealth Dispensary Association, which represents 36 shops in the state, estimates 80 percent of sales are for adult-use. While it’s certainly not the only industry to see cuts in the pandemic, cannabis companies are especially vulnerable. Unlike other small businesses decimated by the outbreak, they are not eligible for federal relief, and can’t declare bankruptcy. Therefore, a long-term moratorium on adult sales could be devastating. “The government is going to be there to help almost every single other industry out there, but there’s gonna be nothing for us,” says David Torrisi, head of the Commonwealth Dispensary Association, which represents 36 members in the industry. “We’ll probably lay off 2,000 people in this industry over the next few weeks.”

This isn’t the first health crisis to put a dent in the marijuana business, either. Pot shops just last year were asked to shoulder the financial burden of halting sales of THC vaporizers to slow the spread of a vaping-caused illness, despite little evidence tying the mysterious lung condition to licensed marijuana products. So it’s particularly frustrating for customers and business owners to see the state dismiss pot shops in a time of need like this, while legislators have bent over backwards to amend liquor laws and allow restaurants to sell beer and wine with takeout orders. What’s more, given the hit the state’s budget is taking in the shutdown, you’d think the giant tax revenue haul the state gets from adult-use cannabis sales might come in pretty handy right now.

As far as customers are concerned, it’s not just people jonesing for a joint at the end of a stressful day who are burdened by the closure, but those who benefit from the drug’s medicinal qualities yet are afraid to sign up for a medical ID card because they don’t want to end up on the government’s radar as a marijuana user. That can include veterans who risk losing VA benefits or federal employees who worry about losing their jobs. Outlawing pot shops may be counterproductive to the state’s public health goals if all those users suddenly return en masse to sourcing marijuana from illegal dealers, a particularly risky proposition given the recent vaping crisis has largely been linked to black market THC vapes, and given the fact that dealers may be less likely than licensed retailers to take proper precautions to limit the virus’ spread. It would be a darkly ironic twist of fate if, by trying to limit the spread of one potentially fatal respiratory illness, the state saw a resurgence of another one.

Beyond the public health, tax, and employment ramifications of boarding up dispensaries during this crisis, marijuana advocates say it’s dispiriting to be treated as second-class citizens once again, especially at a time when the state shouldn’t be denying those who want to unwind the opportunity to do so during unprecedented times. “People want to have a glass of wine or a cocktail, and there are many Massachusetts residents who use cannabis products in the same way,” says Torrisi, of the CDA. “We’re not asking for special treatment here. We’re looking for fairness.”