My Life in the Age of COVID: MFA Director Matthew Teitelbaum

Now that the 150-year-old institution's doors have temporarily closed, we asked its director what it takes to run a museum while working from home. 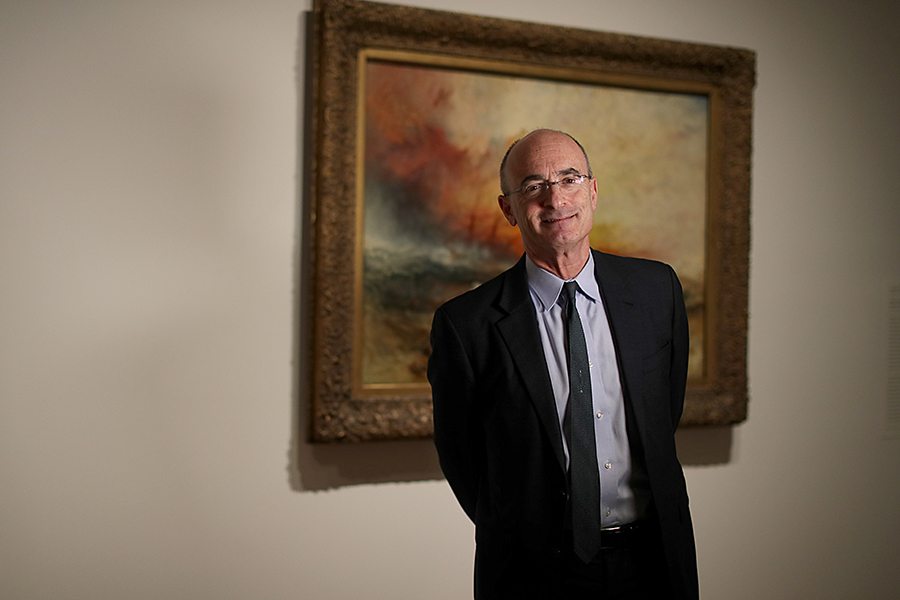 As the COVID-19 pandemic upends every aspect of Boston life, we’re checking in with some local residents to learn how they’re processing our new normal. They’ll share serious thoughts on their concerns for the city—and yes, some silly recommendations on what to binge-watch, too. For the rest of the series, click here.

Whether visiting the Monet room for a serene break from the city or attending one of the popular Late Nite or First Friday events, many Bostonians know the Museum of Fine Arts not only as a cultural giant, but as a beloved community space. Now, after opening its doors to the public almost 150 years ago (then located in Copley Square), the Fenway institution has temporarily had to close them, along with much of the rest of the city. Recently, the MFA announced an extended closure through June 30—a portion of the staff has been furloughed during this period, and director Matthew Teitelbaum has taken a 30 percent pay cut. Teitelbaum, who is working from his home in Brookline, spoke to us about how the museum is protecting against art theft, why they may not reopen until September, and what he finds comforting about watching vintage NBA games.

What is your level of concern right now?

Well, my primary level of concern is with our staff. Their well-being, their livelihood, their sense of connection to something that is a museum that they care deeply about. I think about that all the time. The first thing I think about when I wake up, frankly, is how can I keep the museum as whole as possible?

How have you been coping with all of this so far?

Walk me through your typical daily routine right now, starting with the first thing you do when you get up.

The first thing I do when I wake up is say hello to my wife and give her a kiss. Then I check my email to see whether or not any facts or inputs have changed overnight, I check the news, starting with local to try and figure out what’s happening in Boston. And then I go beyond that—national, international. And then the next layer is art news. I check a number of sites, which are tracking how museums are responding in different locations around the world. Even though I think all of our strategies are local, in the end, it’s very important for me to know what the range of options are.

I tend to spend most of my morning on the—well, I was going to say on the phone, but that sounds very 19th century—on Zoom, or GoToMeeting, or on the phone, often in shared dialogue with a group of colleagues. And then, very exciting, I do more emails and communicate more in the evening. Somewhere in there, I might over dinner have an hour conversation with my wife, or I might FaceTime with one of our kids or my mother. See, I told you it was gonna be boring. Like this was the most boring thing I’ve said in a long time. But the routines actually are quite important, because you’re dealing with isolation, and so making sure you have moments of connection are really, really important.

What do you miss about the experience of going to the MFA every day?

The workplace culture where you’re working side by side with your colleagues, sharing ideas, problem solving together, being creative together—I miss that a lot. That proximity and exchange that happens when you’re together. And then, of course, I know that I’m very lucky, because I can walk to my office through some of the greatest works in the world. I miss that sense of beauty and being reminded of the creative spirit, which is a gift every day.

What goes into protecting and preserving the art while the museum is closed?

We have significant systems in place operating well, and we have a cohort of staff on patrol on a constant basis, so the site is consistently monitored. At this moment, it’s about the protection of the collection.

Besides going to the museum every day, what do you miss most about your former, pre-social distancing routine?

Well, what fulfills many of us is spontaneity. And it fulfills us because you live a life of surprises, or responsiveness, or ability to embrace opportunities where you just decide to do it. And you can’t do any of that at the moment, because everything is very prescribed and purposeful, as it should be. I think what we’re doing as a community in Boston, and it’s obviously being done elsewhere, is admirable and shows a deep humanity. So we’re doing what we should do. But there’s a part of me that misses that notion of spontaneity and seizing opportunity.

Have you made any interesting changes in your personal or work routine that you intend to keep doing when things return to normal?

We ceased working in a traditional way at the museum as soon as we closed the door after going to work remotely, and that has forced on us a certain discipline and urgency that I think is actually helping us. In an unclear moment there’s actually clarity about how to set up processes to get things done, and I think we need to hold onto those.

On the personal side, I have not in my previous work routines had quite the same balance between sitting in front of a computer screen and getting on my exercise bicycle, so I’m going to remember that exercising every day, or close to it, is something that gives me pleasure and connects me with myself in a very positive way.

What have you learned about yourself during this unprecedented period?

I’m trying to think about how to say this without being sentimental. But, I’ve now been married for more than 32 years, and we’re doing really well. We’re in this moment where we’re doing things every day, 24 hours, Susan and I, and we’re doing it together. And that’s not so much a learning, but it’s an affirmation that I made the right choice 32 years ago, and I think Susan mostly thinks she did.

To that point, how have you been navigating relationships and staying connected, even from a distance?

I try not to be so businesslike [with colleagues] that we forget that we are in relationships with one another and we’re connected to one another, and I think we’re doing a pretty good job of maintaining that sense of being a team. We’ve all got a lot better on Zoom and GoToMeetings so we can be pretty spontaneous in that context of sharing information and showing each other things. And on the personal side, my 90-year-old mother in Toronto has a new computer and is on FaceTime, which allows you to be more part of someone’s day-to-day life. Of course, the truth of isolation is that you feel further away, so, to the extent that you can find these ways to feel closer, it’s an entirely comforting thing.

Is there any task, hobby, or back-burner project that you’ve been wanting to pursue, that you are now finally getting to?

I thought, oh my god, I’ll have a chance to read books on a more consistent basis, and that hasn’t actually happened. I think we’re still trying to put the pieces in place to ensure that the systems are working for the museum. What I would say is my colleagues are, in many cases, thinking about research projects, which are exhibition ideas or online programming that have longer horizons and have more generous timelines. And this has moved some of our conversations into new areas that frankly, we didn’t have time for before, which is a very good thing.

If not reading, is there anything that you’re listening to or watching that helps take your mind off things?

I have occasionally turned on the reruns of NBA basketball games from the 1990s and the early 2000s and, I haven’t watched a whole game, but I’ve turned them on and I found myself transported to a very nostalgic moment. I was captain of my high school basketball team, which, by the way, tells you how poor the team was. But I was the captain and so I did play, and I’m both a Toronto Raptors fan and a Boston Celtics fan, which I know in Boston is very hard to believe, but it’s true. And I certainly was a Celtics fan when I was growing up. So watching some of the Larry Bird reruns and the Kevin McHale reruns and even the Big Three with Kevin Garnett, Paul Pierce, and Ray Allen, I get a lot of pleasure from them. Maybe the nostalgia is what I’m enjoying.

What have you been keeping on hand for comfort food?

I’m having my fruit and cottage cheese in the morning, I’m having my sandwich at lunch, and having something warm in the evenings. It’s not too exotic, and saying it out loud it sounds sort of boring, but it’s sufficient in that it encourages us to slow down a bit.

With the extended closure, staff furloughs, and your own pay cut, it looks like the MFA is planning for this period of social distancing to be going on for quite a while. Is this a result of the advance planning that the museum’s exhibits and events require, or do you think the current May 4 nonessential business reopening date is likely to change?

We’re very much planning in chapters. The first chapter was that when we closed we said that we were going to be closed for at least 30 days, and it became apparent to me within the first week that we were not opening in the middle of April. We have now been working with the end of June as the next chapter. But frankly, most of our planning assumes an opening sometime in September. The reality is that there are so many variables that as soon as you say something, something happens an hour later that makes you rethink it.

And we’re thinking about the sequence of the programs that we would offer to the public in any event. For example, walking through a gallery is probably going to be more comfortable and people will feel safer than they would sitting in the auditorium listening to a lecture. So, our thinking about what it means to reopen the museum will be very much about the different experiences.

What advice would you give to others right now?

I don’t know if it’s so much advice as it is an observation. And that is that one thing that the virus has reminded us, is that we are all connected and we exist and thrive through reciprocity and generosity. And while it’s true that we are physically isolated as we should be, I think it’s both a professional and a personal reminder that we are all connected, and it is how we relate to each other that’s going to get us through.