Man vs. Turkey: A Quarantine Drama Witnessed from a Window, in Two Acts

A battle for the ages. 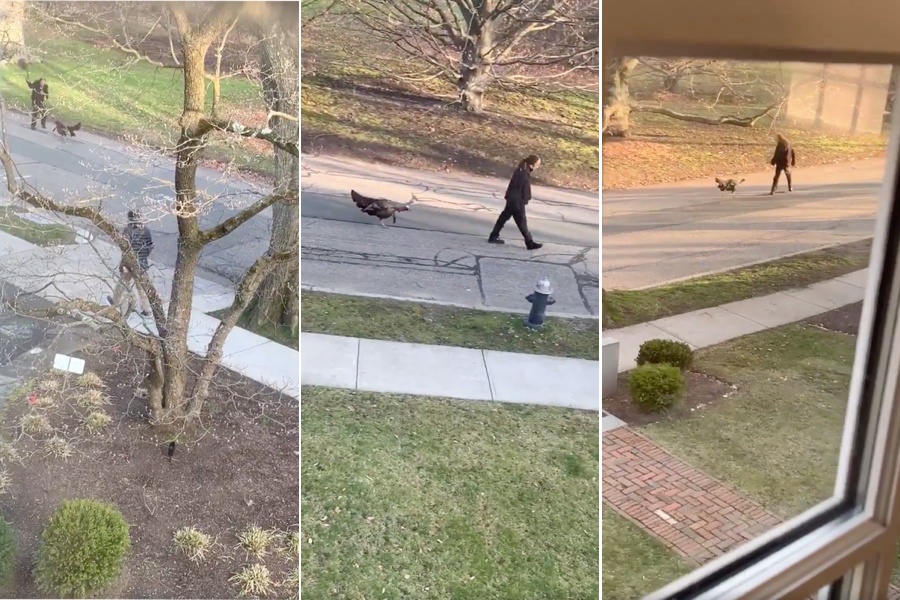 There are silver linings to be found in these days of self-isolation, if you’re among the lucky who are able to stay safely at home. Maybe you’re spending more time with family, picking up an old hobby, reading more. And maybe, if you’re very lucky, all this idle time has given you the chance to observe the high drama unfolding in your neighborhood you might otherwise have missed.

Such was apparently the case for one Brookline resident, whose home office window this week offered a panoramic view of a battle for the ages between a walker and a particularly vengeful turkey.

In a pair of tweets Wednesday, fitness technology company founder and podcaster Jason Jacobs shared this man vs. nature drama in two acts, one that may only have been made possible under these strange new circumstances—at a time when Boston wildlife is newly emboldened, walks around the city have taken on new urgency for cooped-up Bostonians, and so many have ample time to spend staring out windows as the world passes by.

He says there are quite a few turkeys in his neighborhood even when people are driving around as much as normal. “They usually keep to themselves, but every once in a while one gets a bit chippy,” he says, and that looks to be what went down this time, and for whatever reason, one of them zeroed in on this particular pedestrian. How it all got started is unclear. “The two parties have wildly different stories, though, of what happened, I suspect.”

The action in the street begins in stage left, nearly out of the video’s frame. Our hero appears to be against the ropes, nudged backwards as a turkey in attack mode inches forward. But then he regains his composure, refusing to be cowed, and goes on the offensive, swinging a bag he’s carrying windmill-style in the direction of the turkey—menacing his foe but never making contact. He points and demands “Go away!” But by the end of Act One, both sides seem evenly matched.

Scenes outside my home office, part one: pic.twitter.com/cM1nm4zquP

It’s a scene rich with depth. Neighbors in masks walking by do not intervene in this ludicrous scenario playing out near them. Whether that’s because they’re cautiously observing six-feet of social distance, or because a man’s beef with a wild turkey is his burden and his alone to bear is not important. What matters is that this man, in the very middle of an abandoned street, in a battle of wits with a large bird, will not be interrupted.

Part two brings new drama: After one last windmill swing, he marches past the now-sidelined turkey, defiant, and heads stage right, refusing to even look back at his foe. But the turkey silently pursues, undetected. A few beats pass, and the man spots the turkey again, is startled by it, and the windmill swings resume. The battle continues as both make their way off to stage right, turkey in pursuit. For all I know, they’re still locked in a dead heat.

Since I know the suspense was killing all of you, here’s what happened next. Make sure to watch until the end! pic.twitter.com/bYVMN2QHk4

And just like that, another two sublime minutes of quarantine have passed in Boston. What a time and place to be alive.