The latest installation of "Some Good News" was a real tearjerker. 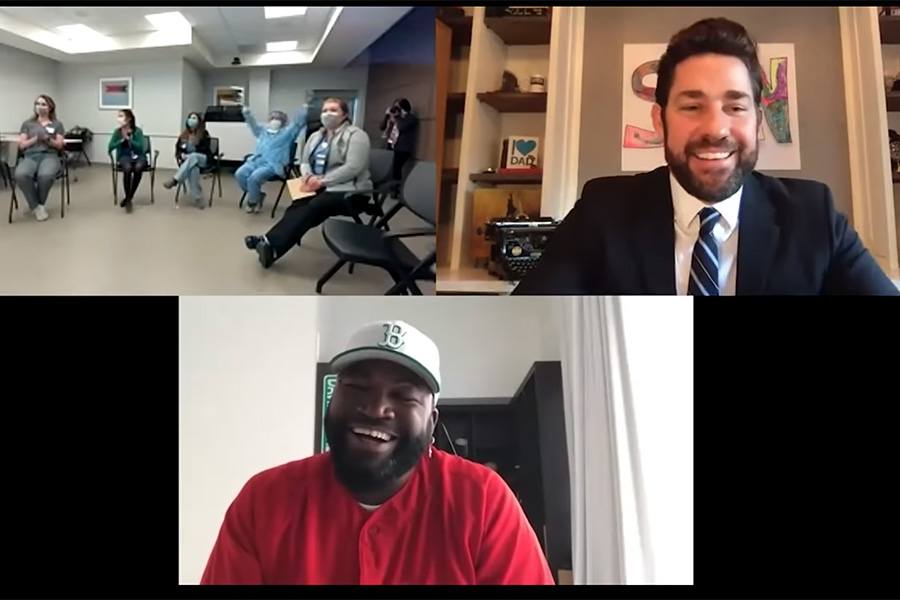 As this period of toilet paper rationing, face-masked grocery store visits, and elevated levels of both boredom and terror stretches on, it feels really, really nice to get some good news once in awhile. For the past three weeks, actor John Krasinski has been doing his best to bring us just that, rounding up happy things from around the world and presenting them on his new YouTube series, “Some Good News”—and this week’s episode had some seriously enviable surprises in store for some well-deserving locals.

It all started last Thursday, when Beth Israel Deaconess Medical Center tagged @somegoodnews in a tweet—”Even though we miss @redsox baseball and the excitement down the street at Fenway, @bidmchealth’s Red Sox Nation is still going strong!” it read. The tweet evidently caught Krasinski’s attention, and he responded by video conferencing in the hospital’s COVID unit on the episode of “Some Good News” posted to YouTube last night.

Even though we miss @redsox baseball and the excitement down the street at Fenway, @bidmchealth’s Red Sox Nation is still going strong! #somegoodnews @johnkrasinski @somegoodnews pic.twitter.com/SmCINxzxeY

“I cannot articulate how unbelievably honored I am to be seeing you guys,” Krasinski tells the group of face-masked healthcare workers. The Newton native and known Red Sox fan then references back to the Thursday tweet, saying that he knows everyone is missing baseball season. “But that doesn’t mean I can’t bring baseball to you,” Krasinski says. Guess who drops into the video conference then? That’s right—The Office‘s Big Tuna summoned the Red Sox’s Big Papi.

“I gotta tell you guys from the very bottom of my heart how much I love and respect you for what you guys are doing,” David Ortiz says as the hospital workers cheer. To thank them for keeping Boston safe, the slugger says, the Red Sox organization will give each staffer at Beth Israel four Red Sox tickets—for life. “We are the city of champions!” Ortiz proclaims.

From there, the rest of the episode is basically a six minute long game of Boston bingo. Krasinski instructs the Beth Israel employees to head outside, where they’re met by “the most sanitized duck boat in America.” It takes them on a ride to Fenway Park, where they stand on the field and receive a virtual round of applause on the Jumbotron from Mayor Marty Walsh, Governor Charlie Baker, and the Red Sox players. Then, with Krasinski cheering them on via an iPad, they run the bases, do the wave, and throw out a ceremonial first pitch while yelling “Boston strong.”

In a time when it feels like we really can’t thank our local healthcare professionals enough, it’s just…really sweet to see this group receive this over-the-top treatment. “We’re all missing something, but you guys are missing something on such an extreme scale that we will never be able to repay you for,” Krasinski says while chatting with an emergency department worker named Chelsea.

“Well, thanks for thinking that,” Chelsea responds with a shrug. “That’s our job, though. Everybody has a job, right?”

Watch the full episode of “Some Good News” below. Oh, and make sure to stick around to the very end, where Krasinski managed to squeeze in one final shout out to his home state—the credits are paired with a 4-year-old Newburyport boy‘s extremely adorable cover of Bob Marley’s “Three Little Birds.”