Now, and After the Pandemic, Boston’s Streets Need a Fresh Look

Before we get back to something like normal city life, now is the time to do some transit rethinking. 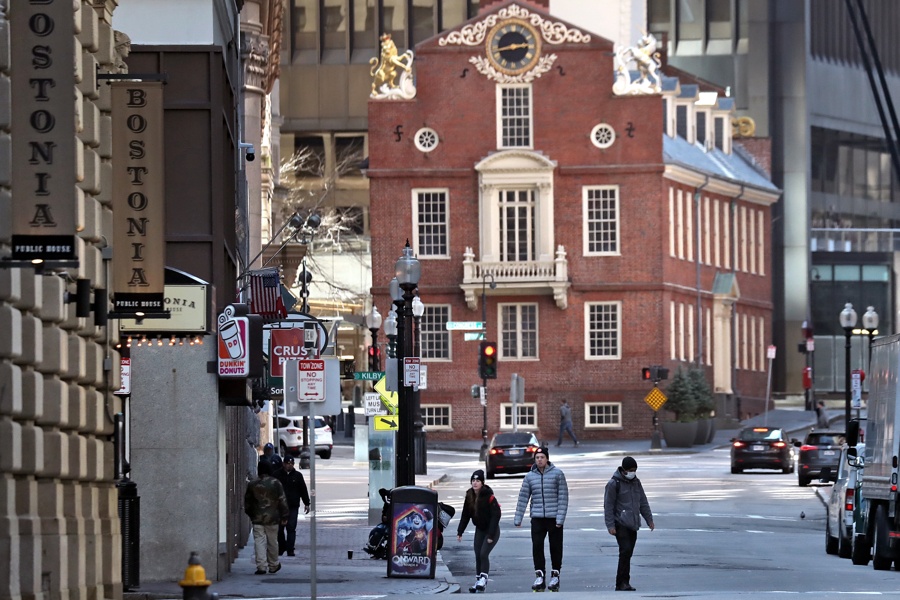 BOSTON, MA – MARCH 31: Some people roller blade down a nearly empty State Street in Boston in front of the Old State House on March 31, 2020 during the coronavirus pandemic. (Photo by David L. Ryan/The Boston Globe via Getty Images)

Given the city’s miles of crisscrossing streets have been largely empty for weeks, you’d be forgiven for thinking that deadly collisions involving drivers and cyclists would be all but impossible. And yet that’s exactly what happened on the corner of Mass. Ave. and Harrison this Wednesday, when a still-unidentified person on a bicycle was struck and killed by a car.

While details on what exactly transpired at this intersection are being sorted out, the crash serves as a reminder that Boston’s roadways still deserve close and urgent attention—not despite the currently surging pandemic but because of it. After all, as anyone who’s recently used the city’s narrow sidewalks or unprotected bike lanes while longingly gazing at the wide-open roadway beside it can attest, some additional asphalt not dedicated to half-ton people-movers could sure come in handy right now. “This crisis has really given everyone a new sense of what public space means and how it should be used,” says Stacey Buettell, executive director of the advocacy group WalkBoston. “I’m guessing people probably didn’t think about the fact that sidewalks are typically only 5 feet wide” before all of this.

Steps are already being taken elsewhere in the area to reallocate streets now that so few cars are on the road. In Brookline, officials voted to cordon off parking lanes on four major streets and make them available only to walkers and bikers. After a heated debate, Cambridge’s City Council last week voted to close Memorial Drive to cars for the duration of the crisis. Even in areas where reclaiming streets is less possible, officials have gotten creative: In Beverly, high-traffic sidewalks have been designated for one-way travel only, to keep pedestrians from having to pass one another.

Those efforts have sparked calls to take similar action in Boston. Earlier this month, members of the Vision Zero Coalition, a collection of transit-focused groups in the city, issued a statement making the case for a number of new initiatives. Citing a recent survey in which some 60 percent of respondents said they felt unsafe about maintaining social distance while walking or biking, they’re advocating for closing off roadways to car traffic near grocery stores, takeout restaurants, and bus stops, where lines of people need extra space to avoid one another, as well as increasing the rate at which traffic signals change to prevent crowding among pedestrians waiting at crosswalks.

Exacerbating the risks on the streets right now is a frustrating phenomenon: Activists say they’ve heard reports of drivers using the newly vacant streets as an opportunity to speed. So the coalition has also called for a mandatory 20-mile-per-hour speed limit on local roads, and a public awareness campaign to remind drivers about the increased risk of collisions as people veer off sidewalks and into traffic to practice social distancing.

Of course, some of the more ambitious measures to close streets to cars pose risks of their own. Proposals to shut down entire swaths of roadways to traffic have been met with fears of creating destinations where homebound Bostonians might congregate in unsafe numbers. Closing streets can also be expensive and divert resources that could be used elsewhere: New York City, for example, suspended a program that shut down streets in each borough after too few people made use of the additional space to justify the expense. “We’re watching other cities and trying to learn from them, and there have been lots of lessons so far,” says Eliza Parad, interim executive director of the Boston Cyclists Union, which is part of the Vision Zero Coalition. “Especially as we get into the summer, more people will be out looking for places to recreate, and it will be important to figure out how to do this right.”

Regardless of what measures are ultimately taken in Boston, the stakes couldn’t be higher. Transit activists have begun considering the possibility of a road-safety perfect storm once the city begins to ease lockdown restrictions, whenever that may be. Because commuters heading back to work will likely be wary of taking public transportation if they can help it, it’s possible that Boston will see unusually high numbers of both cars and cyclists taking to the streets. Planning for that surge now by giving bikes and pedestrians an unprecedented share of the road would help keep them safe by keeping them separated, both from cars and from one another. Our streets are clearly not suited for these trying times, and frankly weren’t cutting it before the pandemic either, sometimes with deadly consequences. What better time than now to make historic investments in making them better?