Boston Had One Confirmed COVID Case on March 1. There May Have Been 2,300 More

This according to a model from a Northeastern University research team. 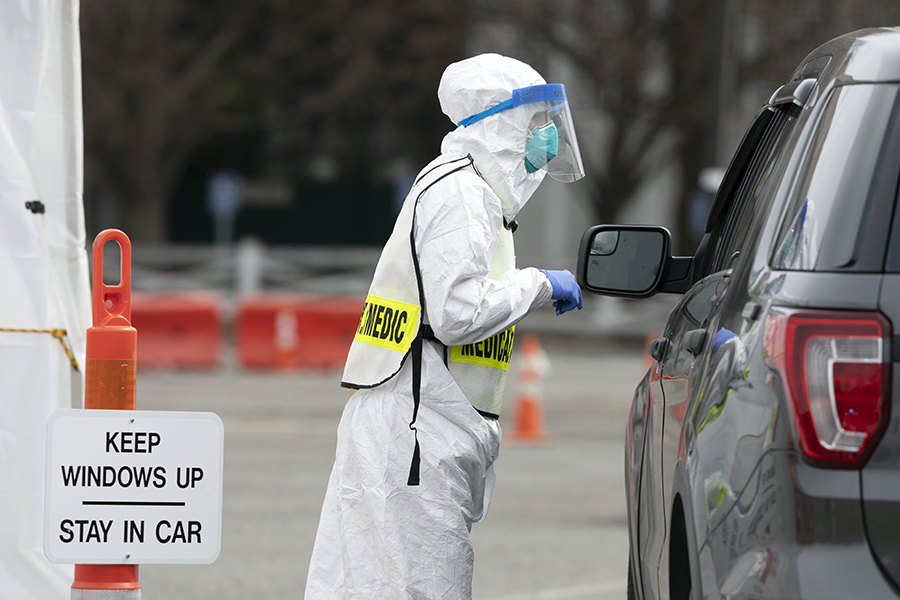 A medical worker screens people arriving at a special COVID-19 testing site in Boston, Saturday, March 28, 2020. The drive-thru testing site is only open to qualified first responders who meet the state criteria for testing. The new coronavirus causes mild or moderate symptoms for most people, but for some, especially older adults and people with existing health problems, it can cause more severe illness or death. (AP Photo/Michael Dwyer)

It’s abundantly clear now that, long before testing revealed it, hidden coronavirus outbreaks were spreading throughout the Boston area, unbeknownst to us. But estimates from a model of the disease’s spread made by researchers at Northeastern University are now offering insight into just how many cases may have flown under the radar over the past few months.

The model, conceived by Dr. Alessandro Vespignani and a research team at Northeastern’s Network Science Institute, was highlighted in a New York Times story this week. The model makes a jaw-dropping estimation: That on March 1, when there was only one confirmed case of COVID-19 in Boston, there actually could have been about 2,300 cases in the city. For comparison: Boston was officially reported to have reached 2,300 cases on April 8, over a month later.

The researchers, who looked at data for Boston, Seattle, Chicago, San Francisco and New York, estimates that there could have been a combined total of 28,000 infections in these areas by March 1. on that date, the five cities combined were reporting just 23 cases total.

On March 1, there were only about two dozen confirmed coronavirus cases across Boston, Chicago, New York, San Francisco and Seattle. Political leaders were questioning how severe and how disruptive the outbreak would become. https://t.co/udpNMBCUnA pic.twitter.com/AthKkvKWtY

Researchers’ estimates indicate that even on March 1 there were about 28,0000 infections in five cities https://t.co/udpNMBCUnA pic.twitter.com/bcr8rOGus8

The model maps the outbreak over time by using air transportation and other travel pattern data to track individuals. This allows researchers to simulate the trajectory of the epidemic from China and other countries to the United States, as well as the chains of transmission that would have occurred throughout several major metropolitan areas.

“Most of those chains of transmission were undetected,” Vespignani said on CNN Thursday night. Early in February, when Vespignani hypothesizes the first major transmission events in the country occurred, it was flu season, and many who contracted the disease may not have had serious symptoms—plus, the focus at that point was still largely on China.

Researcher Alessandro Vespignani says his team’s model shows coronavirus spread earlier than previously thought, with hotspots in the US likely having infections since February. https://t.co/34BCSmP6jp pic.twitter.com/UZz5yYjC1S

Dr. Vespignani told the New York Times that he and his team posted some of their early projections in mid-February as a warning to leaders. However, they failed to convince their audience that the silent spread of COVID was indeed a real threat.  “We were talking to officials here, and it was the same reaction we got in Italy, in the U.K., in Spain,” Dr. Vespignani says. “They told me, ‘OK, that’s happening on your computer, not in reality.’ Look,” he added, “No one’s going to shut down a country based on a model.”