Heroes at Work; an “Enemy” Outside. What It’s like to Be a Healthcare Worker Right Now

From a distance, Boston's healthcare workers are treated like superheroes. Up close, it's often a different story. 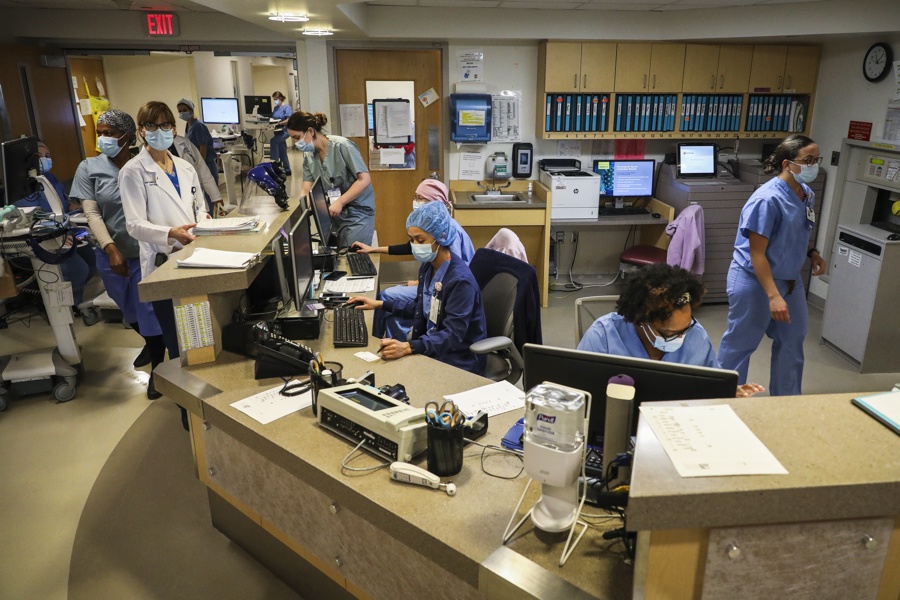 To be a doctor or nurse in the Boston area right now is to be treated like a rockstar, or to borrow a phrase seen on signs and in windows across the country, a “superhero.” Here in one of the nation’s epicenters for coronavirus, non-essential employees have gone to great lengths to celebrate frontline healthcare workers for their lifesaving work—from a safe distance, of course. But up close, the men and women in healthcare I spoke to over the past week tell me they’ve experienced something markedly different from some neighbors, fellow grocery shoppers, and in some cases friends, as fear of COVID-19 has led some people to treat healthcare workers with disgust and derision.

They describe being treated like lepers at grocery stores, facing icy treatment from neighbors, or finding it difficult to relate even to close friends and romantic partners. Some said they’ve never felt more isolated. Most said that for the first time in their careers, they’ve stopped wearing scrubs in public for fear of inciting panic, or worse.

It’s a troubling phenomenon that Boston-based life coach Jessica Knight, who’s been offering free consultations to first responders over the past week, has seen first-hand. “Just imagine how bad nurses need a hug right now,” she says, “and they’re gonna be the last ones to get it. Which sucks.”

At a time when there’s universal agreement we should be celebrating the heroism of frontline health workers, some said they’ve never felt more ostracized, or more isolated.

Here are their stories. Some have asked not to be identified.

I don’t know a single person who will wear their scrubs outside the hospital now. Everyone is too afraid to. It’s a scary time for us to walk around in public.

I was walking to the Charles/MGH stop from Beacon Hill in my perfectly clean scrubs and this older gentleman followed me into the station making one derogatory comment after another: “You’re dirty. You’re trying to spread the virus. You should be ashamed of yourself.” My heart was racing and I was concerned for my own safety, but thankfully the train came just in the nick of time. I’ve never felt unsafe being in my scrubs in Boston until now.

It’s sad. I think a lot of people are afraid of the unknown. We’re the ones who are out there putting our lives on the line trying to save people and stop the spread, and yet we’re being targeted. It’s just not fair. We’re not trying to cause any harm. We’re the ones trying to help. It’s just a sad, scary situation.

I do feel supported, though. I have people buying me food and groceries. People have sent me Starbucks gift cards. I live by Mass General where they’ve been doing the cheering and the first time I heard it, I just started sobbing. It was such a special moment. The support of the general public and my friends helps me get out of bed every morning.

At this point I don’t say I’m a healthcare worker because I see the reactions of people. You go to the store and God forbid if you’re in scrubs, you’re an enemy. Everybody wants you away from them, like coronavirus is flying off of me or something, but it’s not like that. People don’t understand I would never do something to expose people. Ive been dealing with this for a month and a half, and I’m taking precautions as much as I can.

I go on walks with my children and my neighbors who know I’m a nurse switch to the other side of the road when they see me. People are calling all the first responders heroes but they feel disgusted by healthcare workers right now. I’m not saying we should hug or cuddle, but we can still speak to each other.

People don’t see what’s going on in the hospital. We see all the precautions, how we’re cleaning everything. I’ve seen [non-healthcare workers] wear gloves and then take them out with their mouth, and it’s like that’s not how it works! People don’t know how we do things, but they feel disgusted by people who work in hospitals. I tell them, one day you’ll be my patient and I’ll show you I’m better than that.

I think people are just upset and don’t really know who to take it out on. People don’t realize that when we’re going into a COVID room, we have something covering our hair. We have hospital gowns, we Purell, we put on gloves, we put on our N95 in a very specific way, wear a face mask over our face and eye protection under our shields. There’s nothing exposed. We have observers who watch over us to make sure we’re doing every step right. There’s so much protocol and procedure that went into this. People aren’t wearing those dirty scrubs out and about in the community unless they’re an idiot.

Plus, most of us get out of these really long shifts and just head home and go to bed. If you see someone wearing scrubs, there’s a pretty good chance they haven’t gone into work yet, so they’re wearing clean scrubs. Most of us don’t do errands after work because we’re so tired.

My coworker was at a gas station filling up her car before work with a lab coat on, and someone told her she shouldn’t be out in public. She had to explain it was brand-new, freshly laundered, and she hadn’t even been to work yet.

As much as the words of appreciation and the cards people are sending are nice, no one really understands what it’s like unless you’re in it. It’s hard to articulate unless someone knows what you’re going through. Our job is scary right now. Until you’re at someone’s bedside and watching people die, and not being able to have families there, watching them die alone is the saddest part. People don’t see that unless they’re in the medical field.

When I signed up to be a nurse, of course I wanted to take care of people, but I didn’t necessarily sign up to risk my own life for someone else’s. I had a really hard time at the beginning, just sobbing my eyes out for nights in a row, and that was a big adjustment to get over. Now what I think about is whenever this kind of dies down a little and we’re able to start going out in public or maybe seeing friends or family, I don’t think I can do that. I don’t think I can see my family until I’m not taking care of COVID patients. I feel like I’m gonna be isolated a lot longer than anyone else has to be.

I try not to wear scrubs in public now anyway, but I think there’s a lack of information about transmission. Just because I’m in scrubs doesn’t mean I’m risking giving COVID to someone else. Unless I’m physically sitting on the produce or rubbing my scrubs on the vegetables, I can’t transmit it to you. There’s ignorance and a lack of understanding when it comes to health care workers in public settings. It can create this sense of shame, like we’re doing this job to protect you and we’re being treated negatively because of it. We all just wish people would be a little kinder and think before saying something or if you have a comment or a suggestion.

I was talking to someone from a dating app. He was very supportive and appreciative of the work I’m doing, but he was telling me all about how hard it is to work from home, and he said, “Well, at least you still get to go to work and have a sense of normalcy.” I don’t think he was intending to be malicious, but that was one of the most hurtful things I heard. It just made me feel like you don’t have the empathy to realize this isn’t normal to me. Every day I’m being asked to do things that aren’t in my job description, my hours are completely different, and the way we’re running the hospital is completely different from how we used to do it. There is nothing normal about this situation.

This post has been updated to remove some identifying information, and edited to remove commentary from a source inaccurately identified as a Massachusetts General Hospital employee.