Eleven Urban Oddities to Discover on Your Next Walk Around Boston

From a potato memorial to a heavenly alleyway, check out these roadside attractions on your next socially-distanced stroll.

The problem: You’ve been cooped up during the pandemic, you desperately need some fresh air, and you’re sick and tired of making the same six-block walk around your neighborhood. The solution: Set your Google Maps coordinates to one of these cool curiosities tucked around Boston. From statues referencing obscure history to street art with fascinating backstories, you’ll discover new corners of town—and wind up at some very Instagram-friendly destinations. 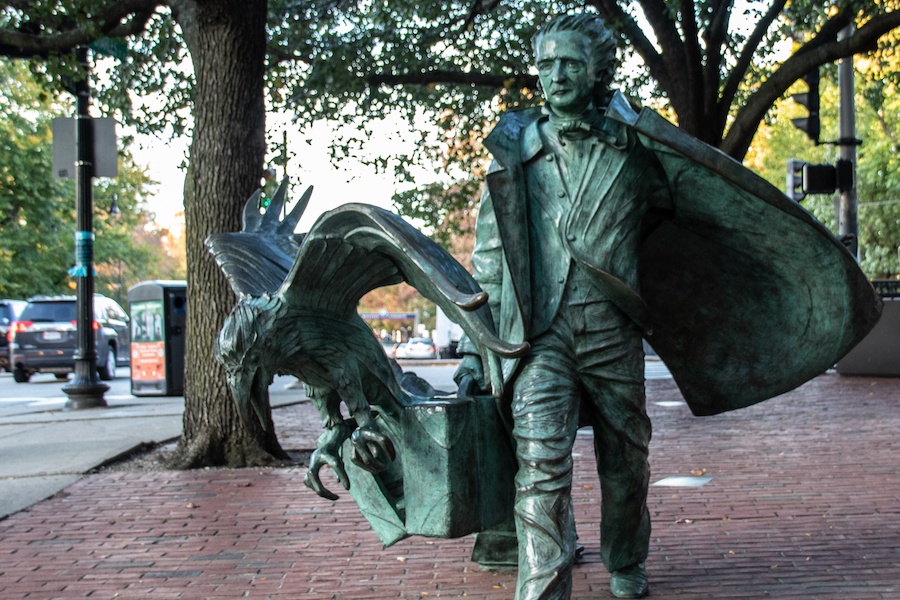 We had to include this one. After all, Boston magazine’s sibling publication is Philadelphia, and these cities are long-embroiled in a friendly literary rivalry over who can “claim” iconic author Edgar Allan Poe as their own. (Baltimore, where Poe is buried, likes to get in on this feud too.) Poe was born in Boston and released his first book here—which was, incidentally, published under the anonymous byline “a Bostonian.” On the other hand, he wrote many of his most recognizable works (“The Tell-Tale Heart,” for one) while living in Philly, where his former home still stands. This bronze sculpture by artist Stefanie Rocknak, unveiled in 2014, was Boston’s long-overdue way of staking our claim to the bard of the macabre.

Where to find it: corner of Boylston St. and Charles St. South by Boston Common. 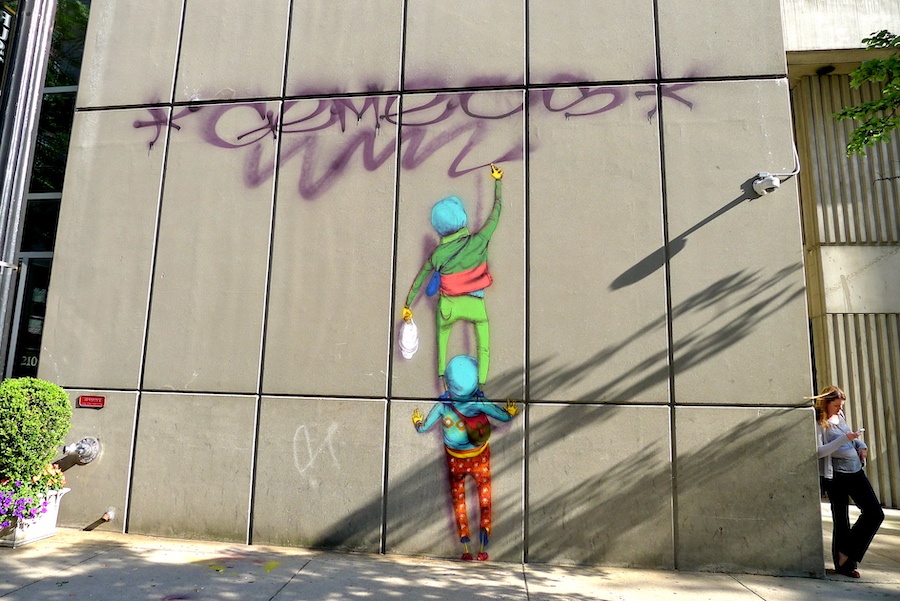 Only a block away from our hometown tribute to Poe, find a very contemporary work that earned Boston more recent cred within the international street-art scene. Though relatively unassuming compared to many of the wilder murals created by graffiti artists all over the Hub, this downtown work was done by the globally-renowned duo Os Gemeos (brothers Otavio and Gustavo Pandolfo). Their acclaimed street art covers cityscapes in Berlin, Stockholm, Lisbon, and other destinations around the world. Boston joined the elite club in 2012 with the arrival of a large, “controversy”-stirring mural in Dewey Square (subsequently removed), as well as this smaller, sedate piece on the side of the Revere Hotel, a then-new property that earned its own arty buzz earlier that year: The place opened by staging a splashy vertical fashion show down the side of the building. 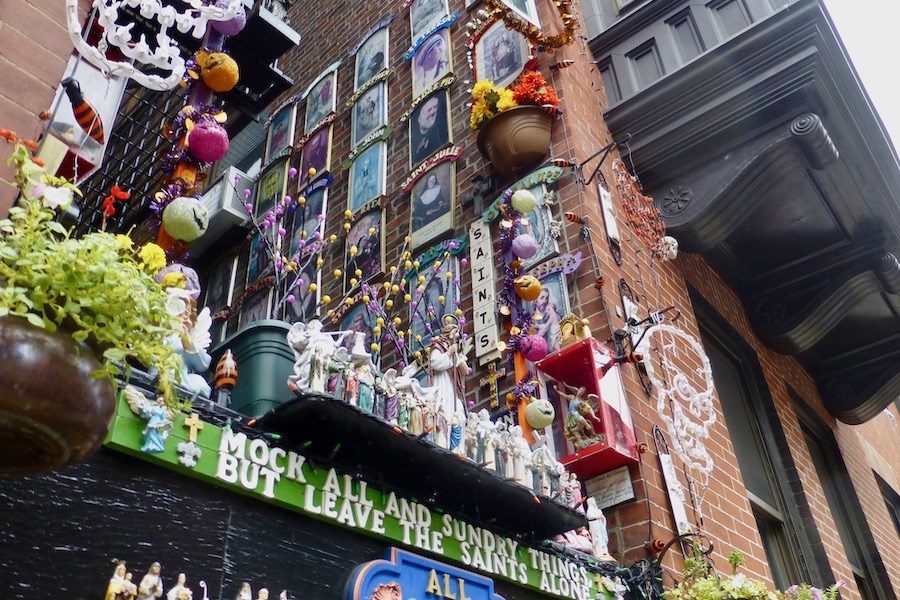 All Saint’s Way by Leslie_atFlickr on Flickr/Creative Commons

Looking as he does like your typical Italian nonno, septuagenarian Peter Baldassari is probably not someone you’d peg as a street artist. But if street art is all about capturing where you come from, what else would you call this eye-catching shrine Baldassari has installed in an alleyway in the North End? After all, these streets—filled with all those famously fragrant restaurants and bakeshops—are home to a series of annual feasts and fairs that honor Catholic saints and the neighborhood’s Italian immigrant heritage. Unfortunately, that century-long tradition will be canceled this year for the first time. Still, you can always take a reflective stroll by All Saint’s Way; many of the framed photos, statues, and colorful candles are visible from the sidewalk, and sometimes Baldassari leaves the alley gate open so that visitors can see even more inside—and, especially right now, find a few quiet moments to renew their faith.

Where to find it: between 4 and 8 Battery St. in the North End, Boston. 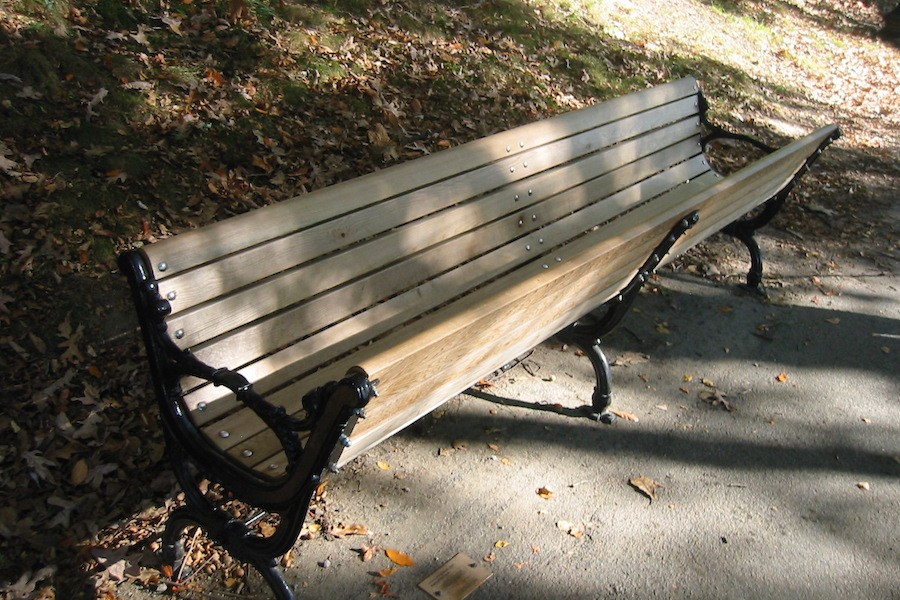 For another, more ironic expression of guerilla art, head across town to Boston’s Jamaica Plain neighborhood. There, placid Jamaica Pond remains open as a peaceful place to walk and soak up the now-blossoming greenery of the Emerald Necklace Conservatory. But if you want to sit and rest, just park anywhere besides this u-shaped bench, a chuckle-inducing curiosity on the pond-side path. In 2006, artist Matthew Hincman snuck this sassy furnishing into the park; it took two weeks for the city to realize it wasn’t supposed to be there, but all was more than forgiven—and it’s now a funny fixture.

Where to find it: Jamaica Pond by Lochstead Avenue, Jamaica Plain. 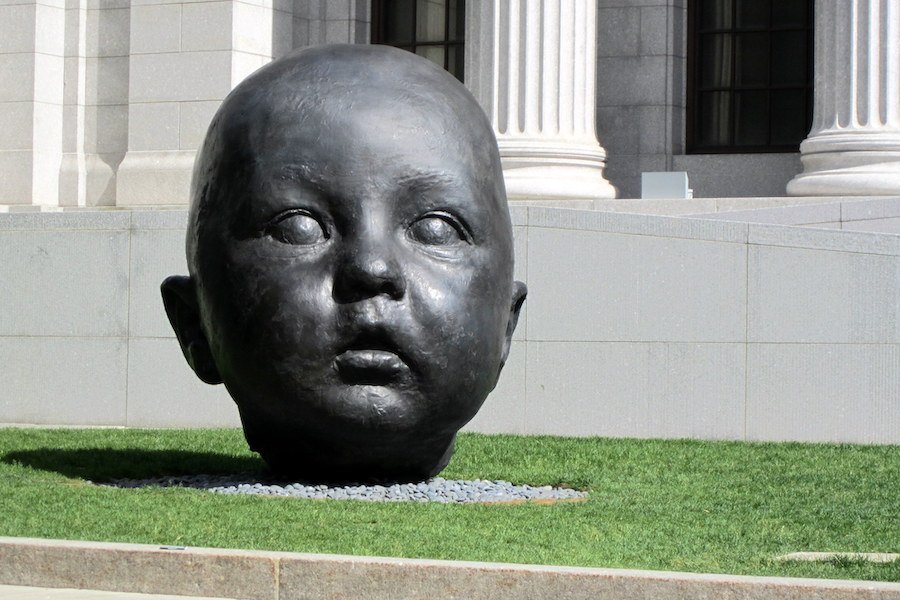 “Day and Night” at the Museum of Fine Arts

What makes that u-shaped bench funny is how easily—and thus, comically—the oddity blends right in to the surrounding environment. It takes a moment to register! Kind of like (bear with me) this pair of enormous baby heads, dubbed “Day and Night,” that just hang out on the less-trafficked Fenway side of the Museum of Fine Arts. These 8-foot-tall, 1.6-ton heads arrived at the MFA in 2008 with their empty Children of the Corn-esque eyes, and we’ve been acting like everything is normal since. It is not, my friends. Repeat: Huge baby heads in the Fenway. (As well as a second pair, staring back across the ocean, from artist Antonio Lopez Garcia’s home city of Madrid.)

Where to find it: Fenway-side entrance of the Museum of Fine Arts, 465 Huntington Ave., Boston.

It being a grand institution, such massive sculptures befit the exterior of the MFA—but not all art need be so, well, big. Exhibit A: the Friendsmithsonian Tiny Museum in Somerville. In 2016, artist Martha Friend set up a small, 3-foot-wide box in front of her Victorian home, where the yard, covered in colorful glass sculptures, is already a local legend. Her street-side “Friendsmithsonian,” meanwhile, is used to display rotating works by other area artists, so there’s frequently a new reason to amble by and appreciate the little things in life.

Where to find it: in front of 135 Highland Ave., Somerville.

Martha Friend’s tiny museum-hosting home looks positively demure compared to another Somerville abode: the Museum of Modern Renaissance, which belongs to Russia natives Ekatrina Sorokina and Nicholas Shaplyko. The pair moved to this former Unitarian church in 2002—and they’ve turned it into a colorful work of art, inside and out. The striking, spirited space aims to reflect the “living manifest of self-realization” embodied by Indian monk Paramahansa Yogananda, whose 1920 speech at this very site is considered a watershed moment in introducing yoga to America. The exterior is awe-striking on its own, but you can also (sometimes) check out the impressive interior: The Museum is often opened for Open Studios events, and there’s a virtual tour here.

Where to find it: 115 College Ave., Somerville. 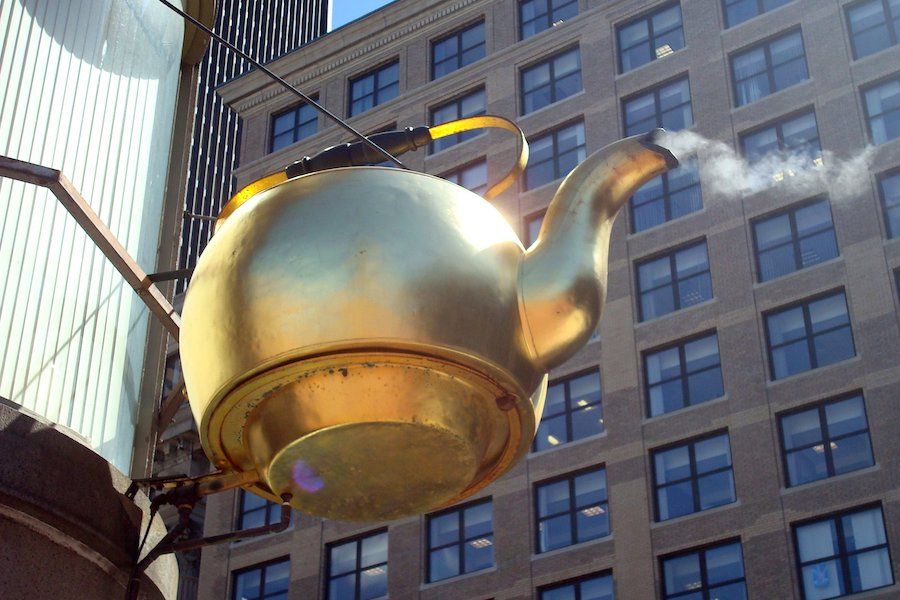 Before you balk at the inclusion of something that now hangs over a Starbucks location, bear in mind: We are a city whose skyline is defined in large part by the Citgo logo. (And besides, day to day, many more Bostonians run on caffeine than gasoline.) But anyway, you might see this downtown fixture anew once you know its history: Made in 1873 for the Oriental Tea Co., the copper, gold-leafed piece is actually one of the oldest animated signs in America. Wondering how much it holds? Here’s the tea: 227 gallons, two quarts, one pint, and three gills, as determined during a contest held two years after it first started steaming. 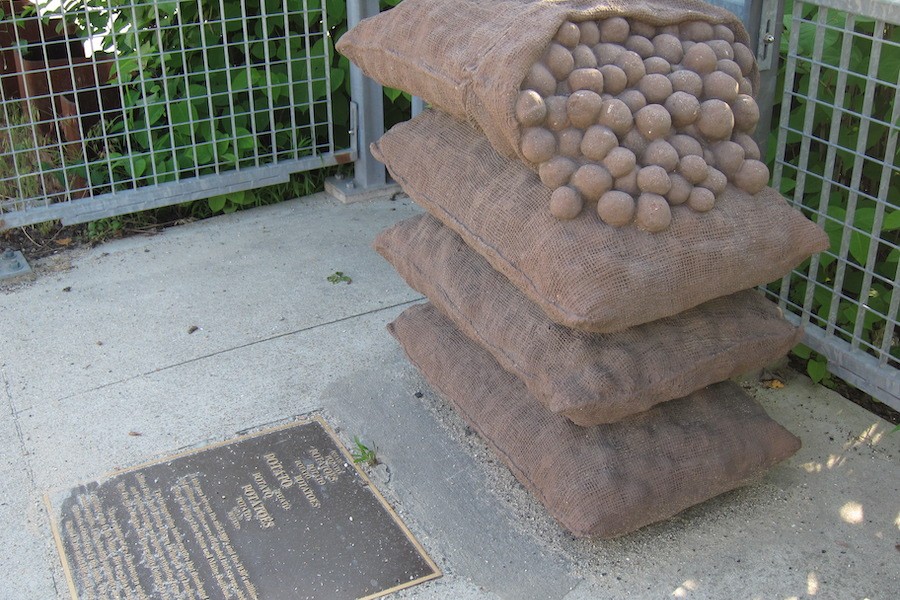 Okay, fine: You want a less-known novelty of the kitchen-consumables type? How about this Extremely Boston statue of potato sacks near a highway overpass in Charlestown? It appeared about a decade ago as a memorial to warehouses that once housed millions of pounds of spuds as they arrived by rail. Alas, the sheds were destroyed in a 1962 fire that led to “the unpleasant smell of burned vegetables permeating all of Charlestown and Somerville,” according to the Boston Globe at the time. (At least it was far less devastating than a certain molasses flood you ought to already know about.) Grab some fries and go find this quirky work; you’ll know it by the plaque that reads “POTATO” over and over again.

Where to find it: on the Millers River Littoral Way, a public art-filled walkway under I-93, off Rutherford Ave., Charlestown. 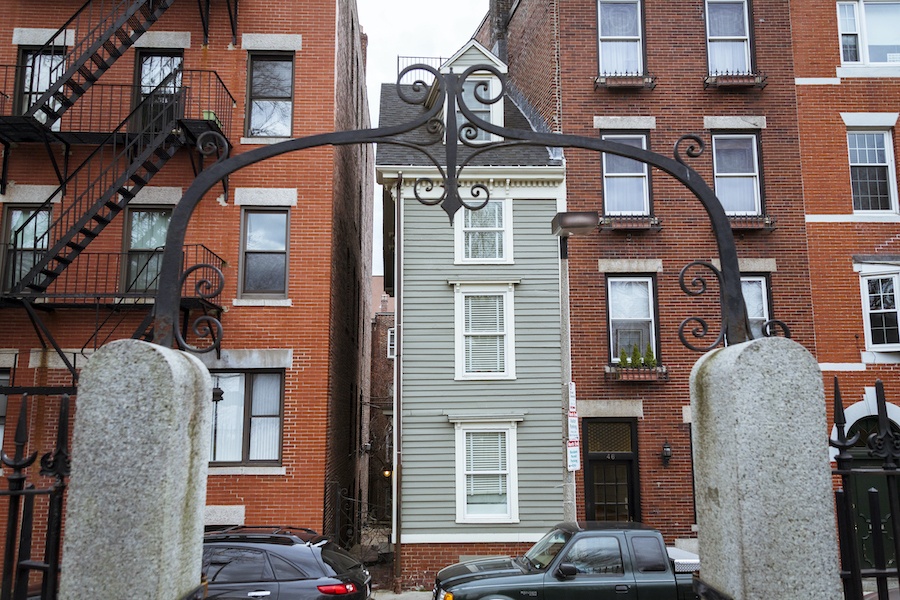 If it feels like the walls have been closing in on you in quarantine—you’re not alone. But at least you’ve probably got a little more room to wander than those inside 44 Hull Street, a North End address that has been deemed the most narrow house in Boston. The so-called “Skinny House” was built in 1884—reputedly as a spite house, when a bitter property-owner decided to block his brother’s harbor view. Here’s what we definitely know: The place is ten feet across at its widest point, so it’s not exactly conducive to social distancing. But you can still peek inside from afar, thanks to this open-house tour from 2017. 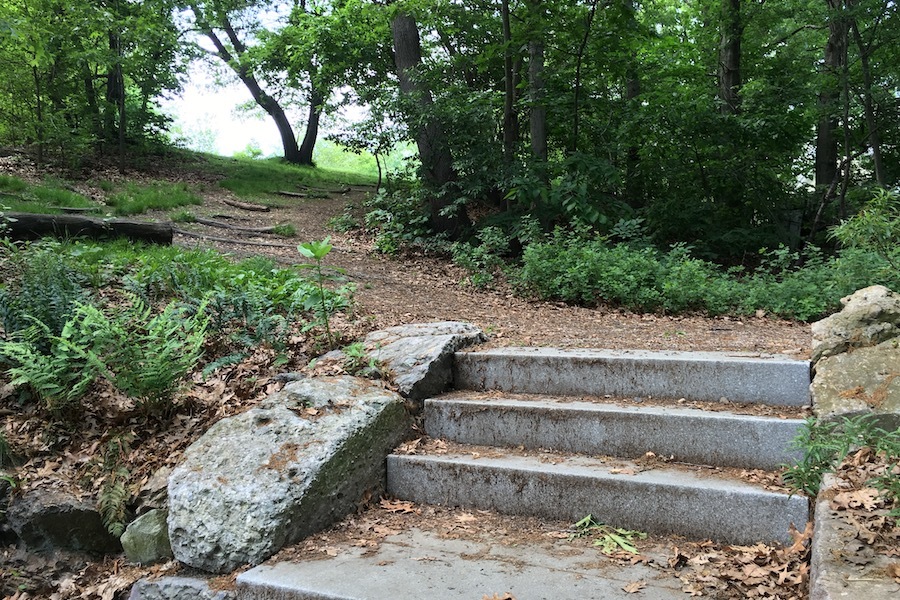 Understandably, maybe you’d rather discover new wide-open spaces. In which case, head to Nira Rock, an under-the-radar plot in Jamaica Plain. The two-acre plot, a former puddingstone quarry, retains a 40-foot-high rock face that can be (very carefully) scaled using the permanent anchors. It’s bordered by woods and meadow, and is managed in part by Friends of Nira Rock, a community group that sometimes plans social events like outdoor movie nights. We can’t wait until those can happen again. But until then, it’s still an undiscovered oasis in our urban jungle—the perfect place to inhale fresh air, and walk off your worries.

Where to find it: entrance off Arcola Street in Jamaica Plain.