By I'm a scraper
Religion


As Told To: A Catholic Priest Providing the Anointing of the Sick for COVID Patients

You may not think of priests when you think of front-line workers, but they're donning masks and gowns to provide the city's sickest with an important end-of-life sacrament. 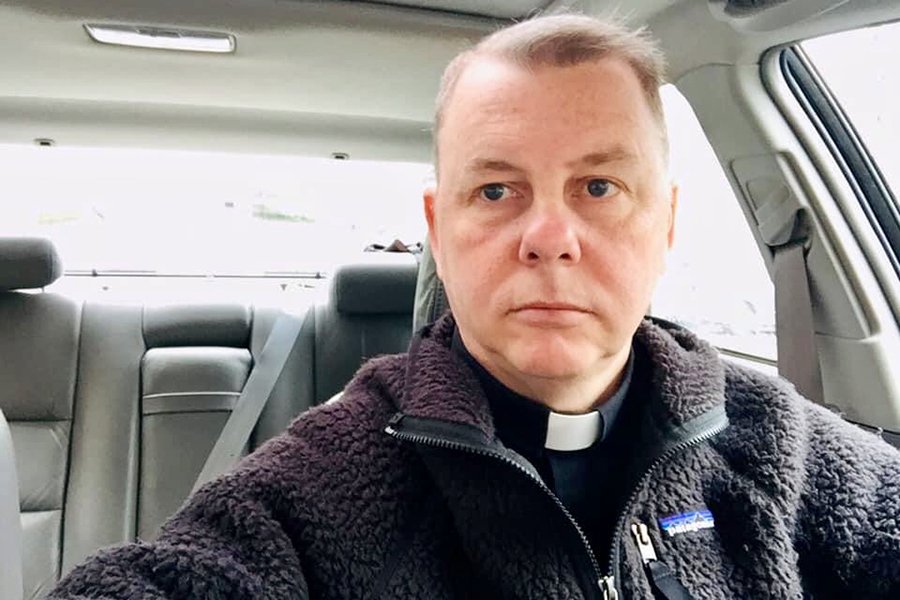 One of the most heartbreaking realities of the COVID-19 crisis is that patients are suffering and dying from the disease in sterile, empty hospital rooms, far from any of the people they love. Because COVID is so contagious, visitors are mostly barred from Massachusetts hospitals, robbing patients of the comforts of holding a spouse’s hand, seeing a parent’s face, or hearing a child’s voice during what is likely one of the most terrifying experiences of their lives.

But for Catholics, there is one comfort that is still available—the Anointing of the Sick, a sacrament given to the seriously ill to bring them peace, strength, and the forgiveness of sins in the face of possible death. Late last month, the Archdiocese of Boston organized a cohort of priests, all under the age of 60 with no known medical conditions, who travel around the city’s nursing homes and hospitals to provide the sacrament specifically for COVID-19 patients. Clad in masks and gowns, these priests enter the hospital rooms no one else is allowed to enter, anointing patients with oil and praying with them. The sacrament has been adapted in the face of the pandemic—while priests typically use their thumbs to anoint the sick person’s forehead and palms with oil, COVID patients are anointed on the feet with Q-tips—but the basic function of the sacrament is the same: To provide spiritual healing and consolation.

Father David Barnes is one of the 21 priests in the city who is now doing this work full-time. Barnes says he chose to become a priest because he wanted to help guide people through difficult moments like these—but at the same time, he couldn’t have anticipated the volume of patients, the severity of the disease, and the layers of PPE that make this vocation particularly challenging right now. Here’s what providing the sacrament has been like over the past few weeks, in Barnes’ own words.

The Sacrament of the Sick is meant to strengthen somebody both in their body and in their soul. For Christians, our whole goal in life is to be united to the person of Jesus, and the sacrament unites the suffering of the person to that of Jesus in a particular way; it links them together. It also strengthens the person, so that they can suffer well—that their suffering in a way becomes an offering to God. And, if the person’s rightly disposed, it can bring about the forgiveness of sins, too.

There are three of us who have moved in together in this house in Brighton. They want to keep the guys who are doing this together, so that we don’t go home and infect other priests who are running parishes and things like that. So the three of us are all solely dedicated to this ministry. When we get a call, we usually go through a little routine—we go in and out the back door, because the back door is where the washing machine and dryer are, and we’re immediately washing the clothes we wear out. We also bring holy oils. Normally, those oils are kept in a little gold container, but because we can’t bring anything out of the hospital rooms with us, we’re keeping it in a little plastic container instead. So we bring that and some Q-tips in a Ziploc bag. Usually, we’d also bring a book with us, but we can’t take that either, so we have photocopies. And then we make sure we have our masks and face shields as well.

When we get to the hospital, oftentimes they take our temperature, they ask a series of questions to make sure that we’re not infected or showing symptoms, and then we get gloves, gowns, and sometimes a cap to put on. It’s a little nerve-wracking at times, making sure we put everything on the right way.

We usually say prayers from the door of the room first. Because of the nature of this virus, the person that we’re being called to is almost always sedated or unconscious. But we announce ourselves anyway, because who knows if they can hear us or not? I tell them that I’m a priest and that I’m there to pray with them and to offer them the sacraments of the church. I ask them, if they can hear me, to express in their heart sorrow for any sins that they may have committed in this life and to trust in God’s mercy for them.

In a normal anointing, a priest would lay hands on the person’s head, put their thumb in oil, and anoint the forehead and the hands of the person. But because of the contagion and because they’re nervous about us getting too much exposure, we anoint the person’s feet with the Q-tip and say the prayers of anointing on their feet. That’s basically it—if the person were close to death, we might say some other prayers. Yesterday, I was visiting a nun, and I actually sang a chant that she would know.

I’ve found that the image of that glimmer of oil has really struck me. As Catholics, we believe that the sacraments really do something. It doesn’t matter if the person is conscious or unconscious. It doesn’t matter that they know I’m there. It doesn’t matter that anybody knows that I’m there. What matters is that that anointing took place. I actually find it in a way very beautiful that you’re performing this service that nobody knows about. I’m just this priest who has a mask and a face shield on; it could be me, it could be another priest—in a way it’s very beautiful that you’re just one priest amongst many. There is no individuality.

I’ve been a priest for 23 years, so I’ve been with people when they’ve died many times, and it’s always a great privilege to be with someone in that moment when they pass over from this life to the next. You realize you’re with them and talking to God, who we hope that they’re going to see momentarily face-to-face, and that is truly extraordinary. It’s always sorrowful to see somebody suffering, obviously, but it’s also a joy to be with them knowing that they received the sacraments. That’s the most we can hope for in our life, to die close to the Lord, and to be part of that is extraordinary grace. Every priest would want to be with somebody in that moment—it’s why you become a priest, to help people.

Normally, I’d say we’re averaging about three or four calls a day. But yesterday we anointed 34 people. And even as I’m talking now, I can hear the other guys getting ready to go out there. Later today, we’re going to a nursing home, and they have 11 people they want us to anoint. So it all depends on the day.

Yesterday, we were busy, so I washed the same clothes three times and took three showers. That part can get a little time-consuming.

If we’re not getting calls, I try to go for walks, maybe do a little reading. That’s pretty much it. The three of us here are living a pretty monastic existence—but so is everyone else right now.

Hopefully I’m young enough that if I contract the virus, it wouldn’t affect me too seriously. I pray for that. But I’d rather be doing something good than doing nothing at all. I think that’s true of most priests. They asked the priests who have medical conditions or who are over a certain age not to do this kind of ministry, but I think every priest wishes that he could be doing it.

We administer to the patients, but we also see the nurses, the doctors, the administrative staff, and the people cleaning. You can sometimes just see the fear in their eyes and their worry for their own families and their exhaustion. So I’m glad that we’re at least able to tell these people that we’re praying for them and praying for their families. In my experience, everyone has been grateful for that, even if they might not be particularly religious. And we’re very grateful to be in the midst of them and to bring comfort to them, because they’re doing the real heroic work. After all, they’re there for hours. We go in for 30 minutes.