Introducing “The Scott,” a Hellish Vision of Great Scott’s Future

It's a dystopian, disturbing, and entirely plausible vision of the fate awaiting the beloved venue. 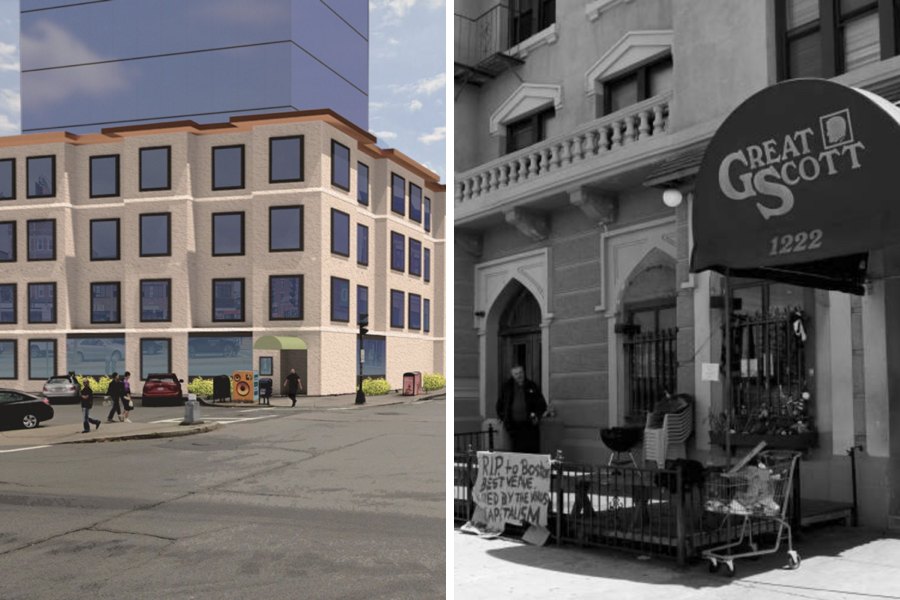 “The Scott” had all the hallmarks of a gentrification nightmare: renderings of a cookie-cutter condo tower rising from the site of a beloved cultural institution, brainddead marketing copy touting the neighborhood’s artsy vibe, a social media presence totally lacking in self-awareness or tact.

So when a slick website and Twitter and Insta account for it appeared, suggesting it was an exciting new luxury high rise that would replace Great Scott—tagline: “Luxury living for Boston’s DIY lifestyle”—it was a perfect villain to the legions of fans still grieving the loss of the beloved Allston music venue. Earlier this month, we all learned the tough news that the club will not reopen amid financial struggles made worse by the pandemic.

Too perfect, as it turns out. The whole thing is a joke—a work of satire concocted by a local architecture student and devotee of the legendary dive. But in a city that seems increasingly unwilling or unable to save places like Great Scott, people couldn’t tell the difference.

Did you know?? The Scott was once home to the swinging Great Scott nightclub (@GreatScottROCK). If you look closely, you’ll even be able to see a plaque designating the original stage location behind the security booth. pic.twitter.com/rHpfQDSCCj

“Wow you’re just sucking all the character out of the whole building, huh?” one person wrote on Twitter. “Remind me to piss on this building when we are all able to have lives again,” wrote someone else. Added another: “Allston is dying.”

If the sign of successful satire is fooling at least some people into thinking it’s legit, then Northeastern grad student John Branagan is an expert. Reached by phone this week, he says he created “The Scott,” complete with a website, Twitter account, and Instagram, as a way to process his despair at losing the venue, and to skewer the worst excesses of Boston’s building boom at the same time.

“When Great Scott closed, I just knew this is gonna end up being some stupid high rise,” Branagan says. “So I was just kind of picturing, like, if I was in a soulless unpaid internship, what would I make?”

According to Branagan, the owners of this fictional 23-floor condo complex are a couple of middle-aged Manhattan suits who know little about Boston, and don’t care to find out. They go by the name “Rock City Developers,” and describe themselves as “a hip young company” based in the Seaport, which they call the “historic Innovation District.” Prospective buyers are told all about the building’s proximity to “Boston’s Coolidge Corner,” and how “a quick ride on the B Train” will take you “to the historic Uptown of Boston.”

Among the Scott’s cutting edge amenities—a must-have in any gentrifier’s luxury palace—are a 500-seat amphitheater (for “a new Harvard Business School Innovative Speakers series”), a private shuttle bus to “neighborhood museums” (the MFA and ICA), and, painfully, a penthouse cocktail lounge inspired by the neighborhood’s now-extinct watering hole, called “The Dive.”

Don’t dismay, you’ll still be able to drink at our #Top_of_the_Heap! You’ll be able to network with your neighbors over drinks in our penthouse cocktail lounge before heading back down to your place. #Allston #TheScott #Views #HighRise #Luxury #RiseAbove #Boston #DIY #HarvardAve

In this bleak version of reality, the Great Scott stage that once hosted countless legendary Boston bands over the decades has been replaced with a booth for the tower’s security team—not to worry, though, because the memory of Great Scott lives on in a commemorative plaque. As a way to demonstrate its deep appreciation for local flair, the Scott in this universe is also soliciting submissions from Allston artists for a mural in its lobby—it will, of course, be offering only “exposure” as payment, and will retain the rights to the artwork in perpetuity.

ART CALL: Think you know what makes Allston really rock? Share your best Do It Yourself (D.I.Y) art skills for a chance to have your art adorn the walls of The Scott lobby! All entries property of The Scott Boston LLC and can be used for any and all marketing opportunities. pic.twitter.com/aKqvq0no4f

If any of that rings true, that’s because Branagan says he’s got plenty of source material in Boston, particularly around the South End and Fort Point, where artists are struggling to hang on to their homes as property values skyrocket, and new, expensive buildings whose promotional materials tout the neighborhoods’ artistic origins are sprouting up by the year.

Branagan says he’s heard from some people, even those who share his concerns about the neighborhood, that his satirical website was too much, too soon, and too real. But he thinks now is the time to sound the alarm about the neighborhood. Allston is already about to change dramatically in the next few years, and the pandemic poses an existential threat to its last remaining gritty landmarks.

When this is all over, it could be open season for the Rock City Developers of the world, and Branagan says the city itself bears a lot of the blame for neglecting struggling artists and the venues that support them. “I’ll never get why the city doesn’t seem to care about the fact that there’s this massive art scene everywhere. It should recognize Allston is more than a bunch of ratty kids who want to wreck these old houses, and really acknowledge there’s some incredibly talented people living there. I think you’re just gonna see more and more people like the Scott coming in and pretending they care, while slowly bulldozing it,” he says. “I’m honestly a little worried about 6 months from now when the exact same thing happens and people are like, ‘Oh, was this real all along?'”