In One Boston Retail District, It’s Not Quite Back to Business

The city's reopening is underway, but slow foot traffic has Jamaica Plain shop owners worried that the summer won't be sustainable. 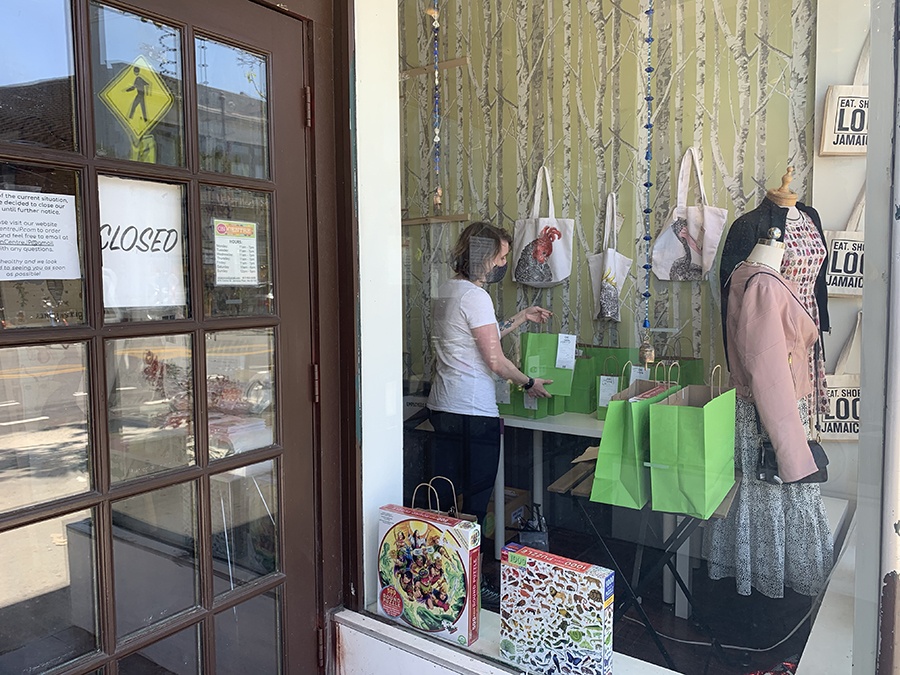 Leo Baez was looking forward to this week. Cacao, his nut and chocolate shop on Jamaica Plain’s small business-packed Centre Street, has been open for takeout and delivery for a while. Still, he hoped he would start to see more foot traffic now that we’ve entered Phase One of Massachusetts’ reopening plan, which gives some additional retail and personal-service businesses, such as barber shops, the green light to operate with restrictions amid the coronavirus pandemic. Baez left for work Tuesday morning beneath sunny blue skies, passing several salons which had clients lined up outside awaiting appointments.

But it wasn’t until after 1 p.m. that Baez finally greeted Cacao’s first customer of the day.

“With the barbershops opening now, we thought that maybe it was gonna create a little more foot traffic, but we haven’t seen that so far,” Baez says. “That’s what’s going to make or break our business in the long run.”

He’s not alone. Although all Boston retailers are reeling from a months-long economic shutdown, a stroll down Centre Street on Tuesday revealed concerns about future viability are especially palpable in neighborhood business districts like this, where independently owned storefronts—unlike corporate chains—simply don’t have the resources to ride out a prolonged recession.

“We have a couple of [online] sales a day, which is better than nothing,” says Philip Celeste, owner of the quirky gift shop On Centre. While limited curbside pickup is a provision of Phase One, Celeste has been offering it, along with local delivery, for several weeks. He didn’t realize he wasn’t supposed to be packaging pickup orders, because larger retailers like Target, Dick’s Sporting Goods, and JOANN Fabric were allowed to remain open. Celeste understood why in-store shopping wasn’t allowable, but “[restricting] curbside seems ridiculous. Someone who might have come here, they went shopping at Target and bought everything there.”

So far, curbside pickup has barely helped his bottom line, the avowed optimist admits. “The electric bill will get paid, but it’s not very good,” Celeste says. He has been using On Centre’s social media to display his wares, and has even taken some FaceTime calls with customers to show off products. But like Cacao, On Centre is dependent on foot traffic, and many of the store’s sales tend to be impulse purchases. Will that kind of shopping experience return this year? Celeste hopes it can, but he isn’t certain.

Of course, even as the phased rollout of reopened businesses gets underway, there is still a renewed “safer at home” advisory encouraging most people to continue to stay inside. For their businesses to survive the summer, Boston business owners need customers to feel comfortable coming out—but they also get if people aren’t there yet. “If you’re afraid to go out, you’re afraid to go out; it’s understandable,” Celeste says.

Customers are making calculated choices about where to go and what they consider necessary. Take Chris Gasper, a sports reporter for WCVB Channel 5: On Tuesday, he was waiting on the sidewalk outside Cacao to get a haircut at MVP Barbershop next door. After weeks of maintaining it himself, the television reporter was eager to have a professional fix his fade. (“I’ve been making sure that when I’m on Channel 5, [all my shots are] straight ahead so no one can see the sides,” he says, with a laugh.) Earlier in the day, he had taken advantage of a reopened car wash, as well—but he didn’t plan to do any other errands. “There’s obviously a lot of risk [with getting a haircut], but this is one of those things, at this point for me, that need outweighs the risk.” Making a purchase from a gift shop? Not so much. 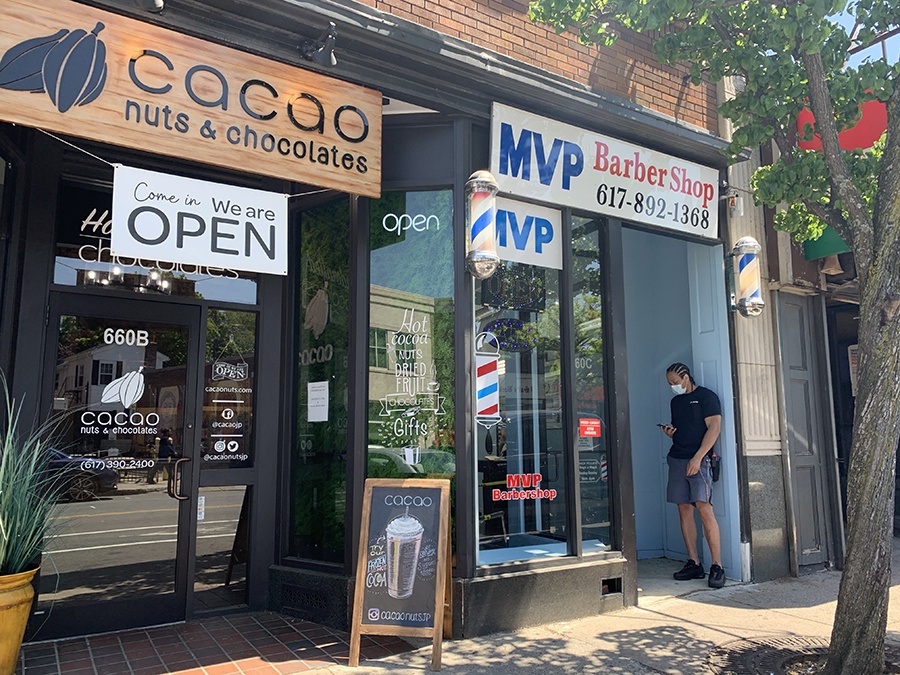 Folks waiting for haircuts on the first day MVP Barbershop reopened amid the coronavirus pandemic simply waited their turns instead of window shopping at surrounding gift shops. Retail store owners are concerned foot traffic will not return to sustainable levels this summer. / Photo by Jacqueline Cain

Also a bummer for small businesses? Bostonians are still going without most social gatherings, which makes things difficult for local retailers who depend on events. Clothing sales have been nearly non-existent at On Centre, Celeste reports. Daniel Lopez-Ospina, co-owner of New Leaf Flores, says his floral shop has “lost pretty much all the weddings and events” that typically make up about 40 percent of annual revenue. That said, he’s optimistic that the post-Memorial Day timing of Phase One will give a bump to curbside business.

“People are really eager to see flowers and some beautiful things,” he says from the other side of the shop’s caution tape-crossed doorway on Centre Street. He was busy fulfilling nearly a dozen orders that had come through on Tuesday morning.

Now that Phase One is underway, some business owners are looking ahead to what Phase Two could bring. They already have a lot of questions—and hesitancies.

Leslie Rivera, a longtime clerk at George’s Shoes, isn’t sure how she’ll feel about allowing walk-in customers back into the small shop once it’s allowed during Phase Two, which could begin as soon as the second week of June. Three of her family members at home are asthmatic, Rivera says, and she doesn’t want to risk exposing them to the virus. She had two curbside sales scheduled for Tuesday, which she arranged ahead of time with customers on Facebook.

“I don’t know if [customers] are going to respect the CDC guidelines that have been set forward,” Rivera says. “I’m just trying to get myself acclimated to doing face-to-face [business].”

Back at On Centre, Philip Celeste says that, while he has received some advice from the independent, volunteer-run JP Centre/South Main Streets business group about how to navigate this unprecedented time, official communication from the city and state needs to be clearer—especially as more “regular” retail business ramps back up.

“Can we have five people [inside], or seven people, or 10 people?” Celeste says. “We have high ceilings, and a lot of space in our store. We’re trying to figure out what is going to be safest for us and for our customers, but we definitely need at least some basic guidelines.” He has purchased a sneeze guard to install at On Centre’s register, based on advice from other business owners. For now, though, his doors remain locked with a “closed” sign hanging, while he and an employee continue to pack up preorders inside.

Both Celeste and Baez say that the summer months tend to be slower for their gift shops, so they’re already prepared to go into “survival mode” this time of year. But if reopening plans are interrupted by a second wave of infections, as some experts warn, prompting renewed calls for lockdown in the fall, all local businesses will need to worry.

“It can be very scary [to think about], but I’m trying to not go down that road,” Celeste says. “I try to figure, let’s get through Christmas, and we’ll see. If it’s not a viable business, well, it doesn’t matter how much I love the community or how much the community loves me.”

Baez is just trying to tread water right now, he says. “We just hope that we could stay afloat for the next couple months,” he says. “And not just me—I would hate to see small businesses going out of business.” 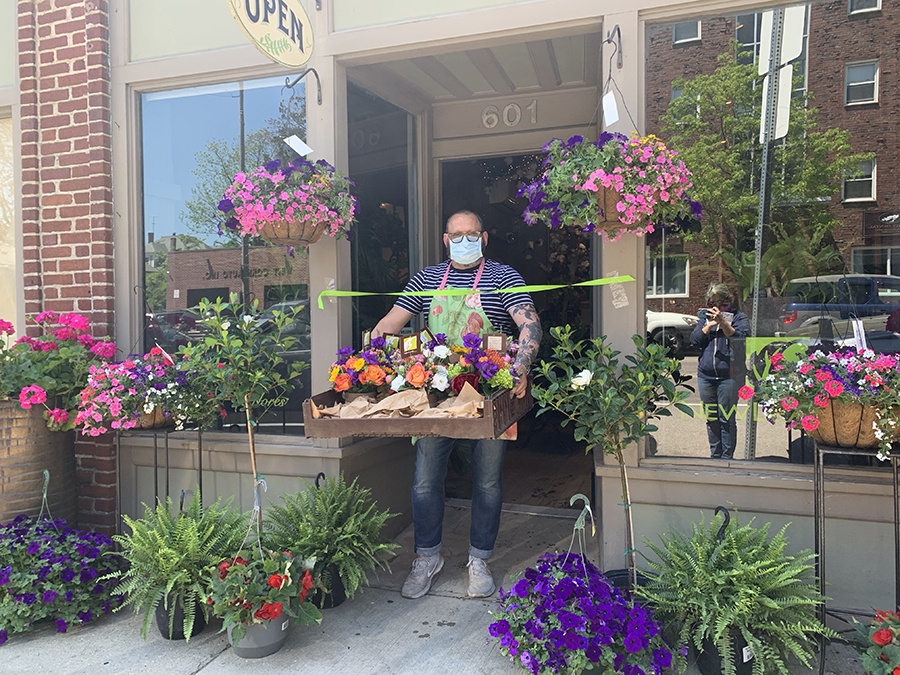 This post was updated May 28 to clarify that JP Centre/South Main Streets is an independent, volunteer-run organization. Although it receives support from the city’s Boston Main Streets program, it operates independently.