A pair of roommates found a creative way to connect with their neighbors, via chalkboard and text messages. 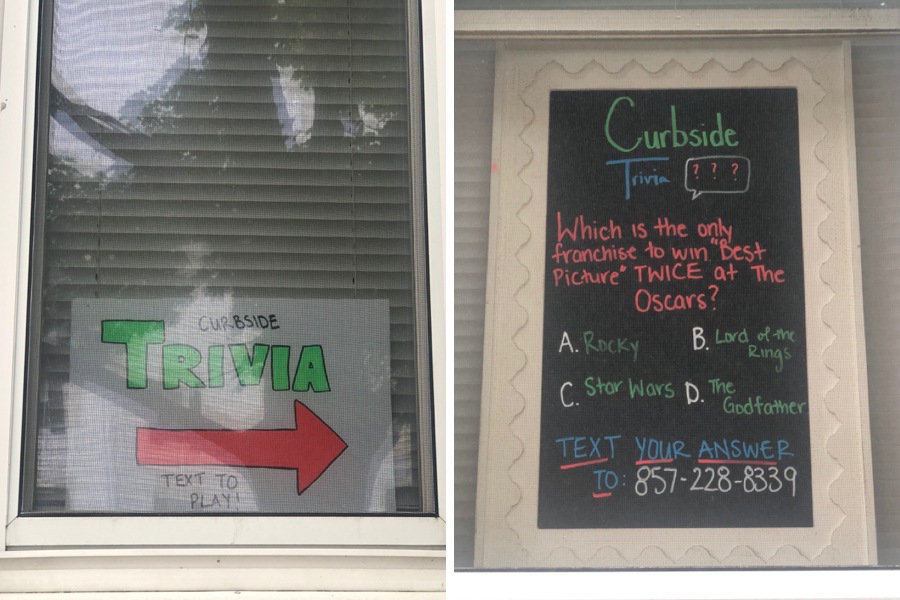 I really miss bar trivia. There’s just something about the collaboration with huddled-up friends and friendly competition with nearby strangers that has always appealed to me. It’s also the exact kind of thing that’s sorely missing in our lives and, as fun as Zoom-based trivia nights are, impossible to fully replicate online.

East Somerville roommates Lauren Carter and Nicole Purcell miss it, too, and spent many a night joining trivia teams at Mystic Brewery before it closed. So earlier this month, they decided to start emulating the experience, sort of, outside their apartment window. Each week, the two come up with a question, scrawl it on a chalkboard, and place it in a window, where dog-walkers and people out for socially distant strolls in their neighborhood can spot them from the sidewalk (they asked me not to share their exact address). Passersby are asked to submit guesses via text, an invitation the duo hopes is a gesture of good will to people who aren’t getting invited to do much of anything these days that doesn’t involve mostly staying home. They call it Curbside Trivia.

“We were thinking about how there’s some people—luckily we have each other—but some people that don’t have other people they can be in touch with during this time,” Purcell tells me. “So it’s kind of a neat way to stay in touch with our community.”

Guesses to the questions are collected via a Google Voice account. The responses aren’t automated: Every time one comes in, Carter and Purcell text back themselves, starting a cheery dialogue with each sidewalk contestant. They started out with just a handful of responses, but the chalkboard has been getting a little more attention lately, including from friends who’ve spotted photos of it on social media and reached out to respond.

“We’ve been coming up with funny answers for all the possible responses, and giving people an option to try again. Like, ‘Good try! But that’s not right,'” Carter says. “We want it to seem like there’s a person there.”

A friend who tipped me off about this charming idea tells me he had a very nice brief chat with Carter and Purcell via text, which concluded with a reminder to “stay healthy and safe” and an invitation to come back next week. It’s a totally safe way to interact with strangers from the comfort of an apartment, and it’s very much the kind of thing we need right now.

So if you happen to be interested in trying your hand at this week’s question, and maybe striking up a conversation with some strangers and fellow trivia fans—just like the good old pre-COVID days—here’s the question of the week:

What is the only franchise to win Best Picture twice at the Oscars?

b) Lord of the Rings