Reopening in Massachusetts: A Cambridge Dog Groomer with a 125-Pupper Waiting List

Pet grooming services were given the green light to reopen as Phase One businesses. 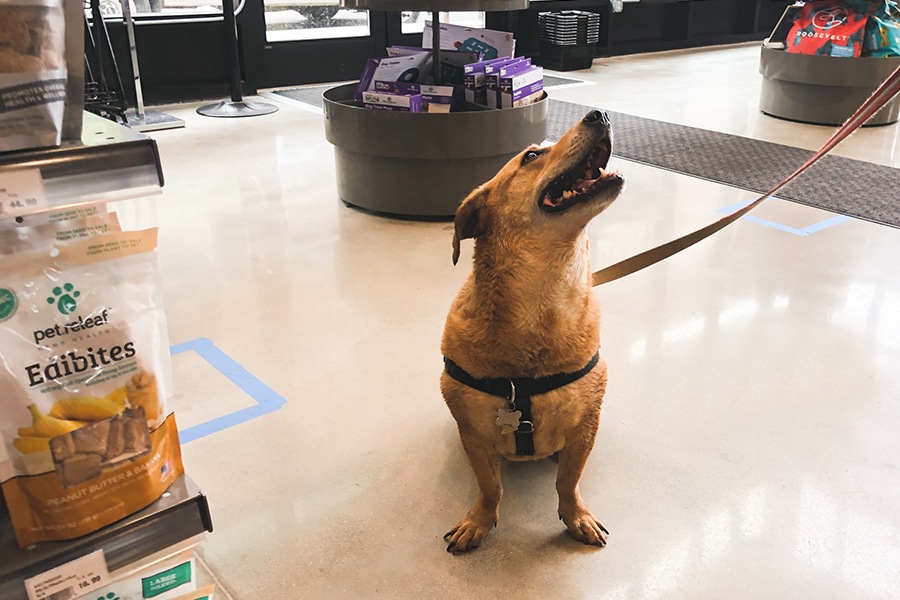 Lucy, a Basset/Labrador mix, after her first post-shutdown bath. Photo by Alyssa Vaughn

Like many of the businesses of East Cambridge’s First Street, pet supply and grooming store Loyal Companion draws much of its customer base from the neighborhood’s nearby offices—the Hubspot and CarGurus employees taking a stroll through the Canal Park at lunchtime, the Google and Facebook engineers headed from Kendall Square to Lechmere station, and the dozens of retail employees coming and going from CambridgeSide mall.

Most of those places are still shuttered. Loyal Companion, however, has officially resumed pet grooming services—and even without those tech workers dropping in during their lunch breaks, business is booming.

“The phone’s been ringing off the hook, and we’re already booking about a month out at this point,” says Dave Roberts, Loyal Companion’s general manager.

The store, which occupies a 4,000 square-foot retail space on the coveted First Street, just opened its doors in October, shortly after the closure of the neighborhood’s Petco further down the street. Per its website, Loyal Companion is a “pet wellness store,” carrying high-quality food and treats in its retail section, but focusing on services as well, including grooming, daycare, and self-wash stations.

The retail portion of the store was permitted to be open throughout the citywide shutdown, so Loyal Companion has been in continuous operation over the past few months. The store has, however, seen a major drop off in business since they had to cease their service operations when the COVID crisis began.

“It was not terrible, but it was tough,” Roberts says. “People still needed their pet food, but people don’t necessarily have the same amount of income to come and get some of the things they would normally get, like hard goods, toys, and leashes.”

The news that pet grooming could resume with Phase One of Massachusetts’ reopening plan was therefore very welcome. While Roberts says he had less than a week to prepare for the return of Loyal Companion’s grooming services, he was ready. Customers, unsure of whether grooming was permitted or not during the nonessential business closure, had been calling the store fairly regularly over the past few months to try to make appointments for their pets, Roberts says. So, he collected all those customers’ names on a waiting list, promising to contact them as soon as grooming could resume. By the time Governor Baker announced that Phase One businesses were getting the green light, Roberts’ list had grown to about 125 names.

“We knew it was going to be kind of crazy in the first two to three weeks,” Roberts says.

It isn’t just Loyal Companion’s loyal customers who are coming back in droves, however. “More and more people have been calling, calling, calling,” Roberts says, many of whom are brand new to the store. It makes sense that the store is seeing an increased demand for pet services: There has been a rush on pet rescues over the past few months, with the MSPCA reporting a 30 percent increase in adoptions since the beginning of the pandemic.

Fortunately, preparing the store to meet the safe reopening measures laid out by the state wasn’t too much of a challenge. “The guidelines are a lot of stuff we already did,” Roberts says. “It’s just taking it to another level as far as cleanliness and sanitation.” So, instead of cleaning the store’s grooming station a couple of times a day, the staff at Loyal Companion is now cleaning after every single dog. Every night, the staff groomer and retail worker team up to mop, vacuum, sanitize and empty the trash. 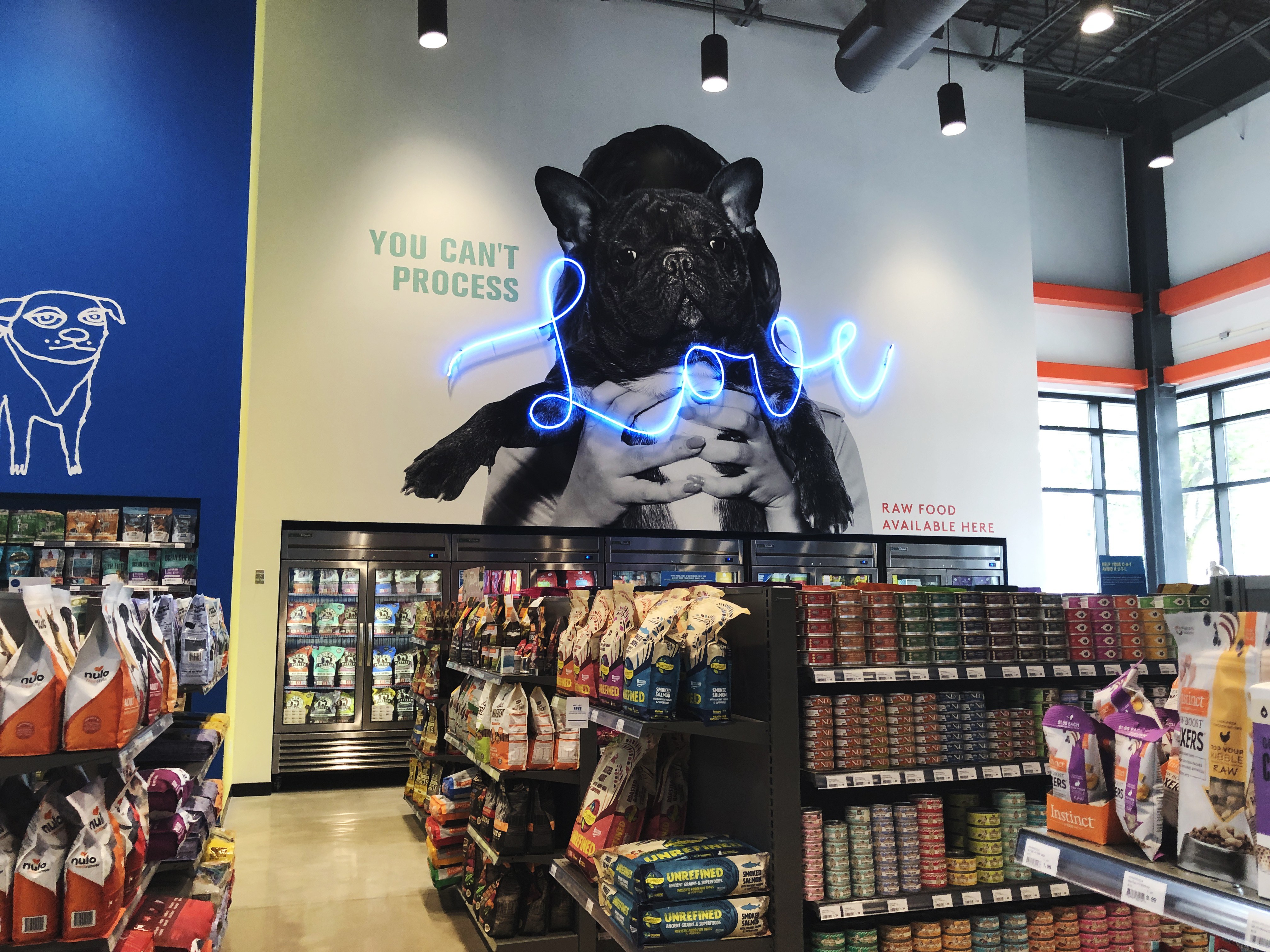 Under normal circumstances, most dogs come in for grooming every three to six weeks, Roberts says. And grooming isn’t purely cosmetic: A too-heavy coat can make dogs uncomfortable, and some long-haired dogs actually experience mobility issues when they aren’t regularly groomed. While many humans have taken to cutting their own hair at home over the past couple of months, grooming one’s pet is a bit more of a challenge. “It doesn’t come down to scissor work as much as clippers, and most people don’t even want to take clippers to their spouse or kid, much less their dog, who’s smaller and a bit more agile and can run away,” Roberts says.

Of course, that hasn’t stopped some from trying. “There were definitely some parents who tried it on their own, which made for some interesting looks when they came in,” he says.

Lucy, a Basset hound/Labrador mix and Cambridge resident, fortunately didn’t fall victim to an amateur grooming attempt during quarantine. She and her owner, Cambridge resident David Molin, went to Loyal Companion yesterday to pay a visit to the self-wash station. After Lucy’s bath, Molin guided her to the rawhide treat section, where she was eager to browse the merchandise. Molin sighed.  “I think the dogs are the only ones enjoying this quarantine,” he said.

Molin said that Lucy’s next grooming appointment isn’t yet on the books, but he’s been waiting to get her in to the self-wash. She hasn’t been to the groomer since March, and the pair has passed the time during the shutdown going for lots of walks outside. Molin isn’t too concerned about virus transmission at Loyal Companion—”They clean the rooms pretty well in between, so I feel pretty comfortable,” he says—and he’s glad to be resuming at least a small part of his normal life.

“This is a good baby step toward normalcy,” Molin said as Lucy pulled him out the door.