Sunday's demonstration will be followed by several other events in the city. 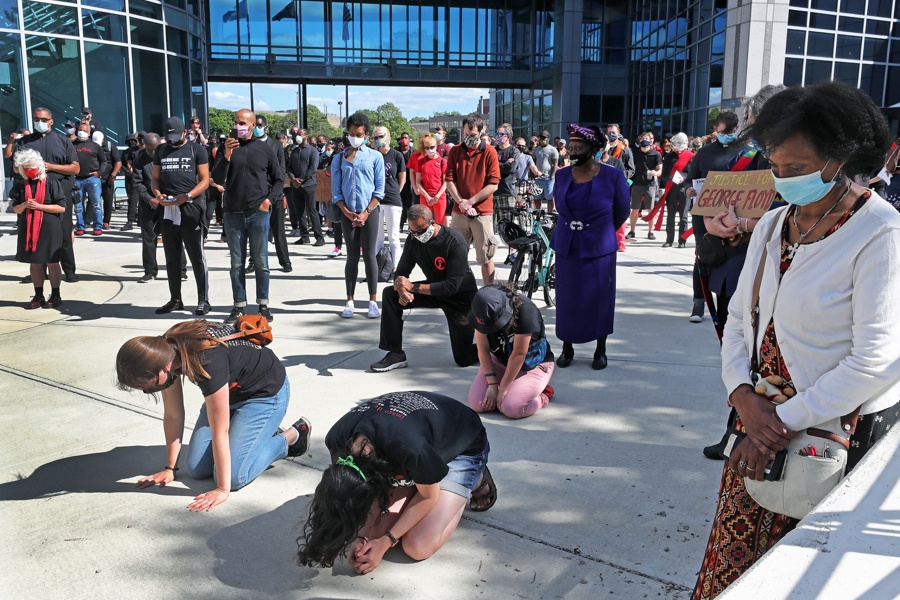 BOSTON, MA – MAY 31: A large group of protesters marched from Nubian Square to Boston Police Headquarters in Boston on May 31, 2020. (Photo by Blake Nissen for The Boston Globe via Getty Images)

Following Sunday’s protests in response to the death of George Floyd, more demonstrations are planned in Boston this week.

On Monday, the first kicked off at 5 p.m. at the Holy Name Rotary in West Roxbury, where as of 5:30 about 200 people had reportedly showed up for a peaceful gathering.

Also Monday, the group Violence in Boston Inc. plans to hold a virtual “Survivor Led Conversation.” It will not be held in person, and will instead be streamed on Facebook, YouTube, and Instagram Live, according to a flier promoting the event.

Tune in via Facebook live at the link below:https://t.co/QYb7qdSoVY

Then on Tuesday, Violence in Boston also plans to hold a “Rally and Vigil” at Boston’s Franklin Park beginning at 5 p.m., where a march and eight-minute “die-in” is planned.

1/3 🚨 Details for Tuesday’s Protest
We will meet at Franklin Park Road and Blue hill Ave at 5:00 pm.

At 5:20 pm we will occupy Blue Hill Ave and “Die In” for 8 minutes and 46 seconds. Which is how long George Floyd laid on the ground. pic.twitter.com/4mJP6Wm9yq

In a press briefing Monday, Mayor Walsh says he is aware of those plans, and planned to speak with organizers of a Tuesday night rally and urge them to tell protesters to remain nonviolent.

“I certainly have some concerns about not the demonstration but what happens after the demonstration,” he says. “We’ve been in contact with them. We’re going to have a conversation in a little while about tomorrow night, and it’s about what happens afterwards. And that’s really messaging the organizers need to get to the crowd and all of us need to continue to work on that messaging.”

Additional events are scheduled for later in the week. A Wednesday Facebook event has been created for a Justice for George Floyd rally on Boston Common set to begin at 3:30 p.m.

Then on Thursday, the groups Progressive West Roxbury/Roslindale and Roxbury Is for Everyone (RISE) are hosting a “Silent Vigil for Black Lives” at Adams Park in Roslindale from 5:30 p.m. to 6:15 p.m. A Black Lives Matter vigil is also planned Thursday at the intersection of Centre and South streets in Jamaica Plain at 5:30 p.m.