Mayor Walsh on Sunday Night’s Protest Clash: “We Will Not Be Defeated by This”

In a briefing the morning after a protest demanding justice for George Floyd turned violent, Walsh said the events of the day were "overwhelmingly positive"—but called the looting and violence that erupted afterward "an attack on our city." 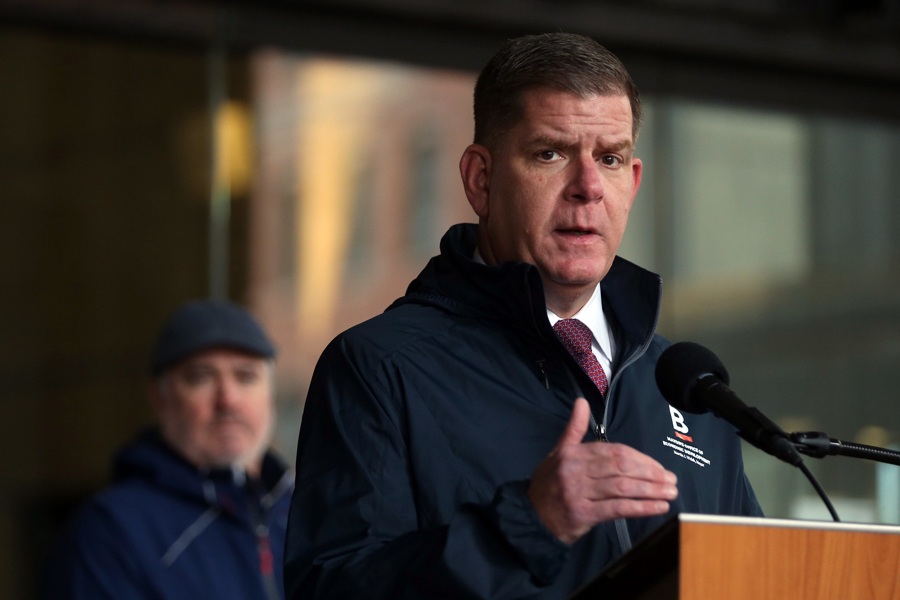 As cleanup crews work to scrub away the graffiti and sweep up the shrapnel and broken glass left in the streets of downtown Boston, Mayor Marty Walsh assured city residents during a press conference Monday that “we are a united city, and we will not be defeated by this or any other challenges.”

Sunday night, thousands marched from Nubian Square to the State House to demand justice for George Floyd, the Black man who died in police custody after a white police officer knelt on his neck for over seven minutes. While the march itself was peaceful, the gathering at the State House quickly turned ugly as the crowds began to disperse. During Monday’s press conference, Walsh tried to focus on the peaceful portion of the day yesterday, characterizing the events as “overwhelmingly positive.”

“We heard young people speaking from the heart. We saw faith leaders providing wisdom and guidance. We saw all kinds of people who simply want to put an end to racism and make positive change in our country,” he said. “I don’t want anything to take away from what they accomplished and the impact that they had yesterday.”

However, Walsh did eventually address the violence that erupted downtown, calling it “an attack on our city and its people.” Walsh says that police officers were hit with sticks, bottles, and fireworks, and that nine officers were taken to the hospital. Eighteen civilians were also transported to the hospital.

Walsh also mourned the “untold economic damage” that was done to both local businesses (many of which are already under strain due to the COVID-19 crisis) and cherished public spaces in the downtown area. Several of the monuments that were defaced, Walsh said, were those that paid tribute to Black history, including memorials dedicated to abolitionists, Civil War veterans, and the 54th Massachusetts Volunteer Infantry Regiment, the second African-American regiment that fought for the Union in the Civil War.

“The actions of some last night…hurt a community that is already hurting, more than anyone should ever have to bear,” Walsh said.

Boston Police Commissioner William Gross and District Attorney Rachael Rollins also attended the briefing. Gross commended his officers, who he says were under attack. Walsh later echoed Gross’s praise for the police force on the scene last night, saying that “the police had a great plan and a great approach.”

Gross also shared that, of the 53 total people who were arrested during the mayhem, 24 of those individuals came from outside the city of Boston, and two (plus one who received a summons) came from outside the state. “Why do I even want to mention those numbers?” Gross said. “Because I want to break a negative, stereotypical view…that those hellbent on destruction just came from the inner city of Boston. That is not the case.”

During her impassioned remarks, Rollins condemned the violence and looting that occurred last night, but also reminded listeners of the issue that rested at the heart of yesterday’s event: The unjust murder of Black people at the hands of law enforcement. “As your elected district attorney, we have looked around this country and seen police officers —people [whose positions] Black lives pay taxes to fund—shoot us in the street as if we were animals,” Rollins began. Yes, Rollins said, those who incited violence will be held accountable—there are three sessions of the Boston Municipal Court currently in the process of prosecuting those who escalated yesterday’s event—but it’s also important to remember that “buildings can be fixed,” while those whose lives have been stolen “are never coming back.”