The T says it closed more than 10 stations for "the safety of transit riders." 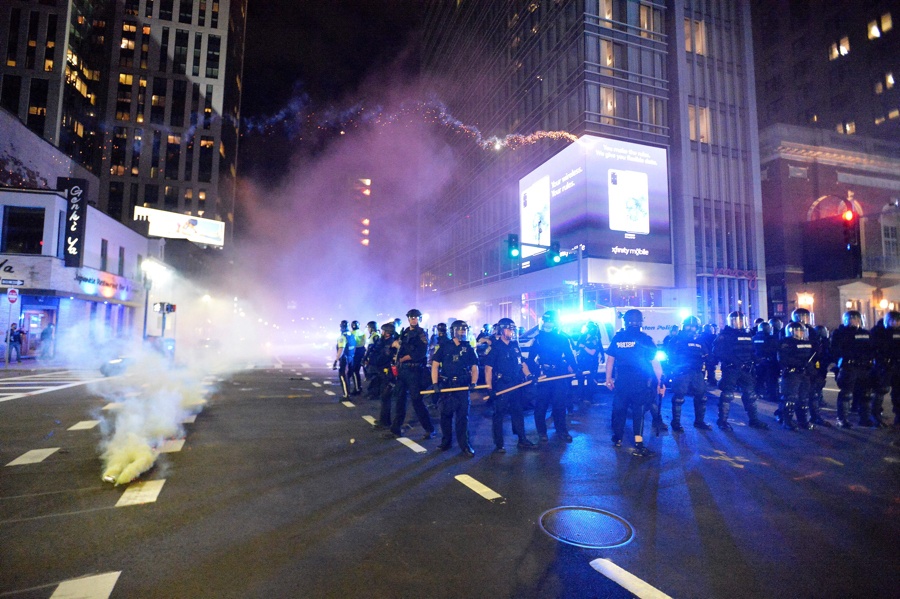 Police stand guard with batons during clashes with protesters after a demonstration over the death of George Floyd, an unarmed black man who died in Minneapolis Police custody, in Boston, Massachusetts on May 31, 2020. Photo by Joseph Prezioso / AFP

As a by and large peaceful protest spiraled into chaos last night, police closed in and issued dire warnings. “Peaceful protestors along Tremont Street are asked to vacate the area,” the Boston Police Department wrote in a tweet at 9:40 p.m. “If you are a peaceful protestor, the time to vacate and go home is now.”

Those now protesting in the streets of Boston have surrendered the moral high ground as efforts to hurt and harm police officers continue to intensify in our city. Men and women of BPD doing their best to restore order and keep the peace.

But anyone who sought to heed that advice and flee the center of activity in Downtown Crossing and Back Bay on public transportation suddenly found themselves out of luck: By that time, major MBTA stops in the area had been closed.

“With the safety of transit riders, T employees and demonstrators of paramount importance,” agency spokesman Joe Pesaturo says in an emailed statement, “public safety personnel determined it best to limit access to certain sections of the subway in the downtown area.”

All factors were considered in the decision making process,” Pesaturo writes. “Today, we can inform you there were no reported injuries nor property damage to the transit system, allowing regularly scheduled service to resume at all stations first thing this morning.”

As the closures came down, demonstrators fleeing the area found police stationed outside the stations’ entrances and turning riders away. Riders would have to walk a mile north to North Station.

Boston police prevent protestors from getting on the T 5/31/20 #boston #BostonProtests #mbta pic.twitter.com/iCyurUu6SY

Some have railed against the decision to close the stops, which kept some from fleeing clashes with police. In a tweet, City Councilor Julia Mejia said she “had to personally go on two rescue missions to pick up young protesters who were stranded,” adding, “How are we ensuring that #AllMeansAll make it home safe?”

Reached by phone, Mejia says she drove into downtown Boston and Dorchester to help find a way home for protesters as young as 16, who found themselves surrounded by chaos without a way to leave safely.

“I feel like there was no coordination,” Mejia  says. “I understand the concept that if young people were able to get there they should know how to get home, but if every single outlet you had to find a way out is locked down, that just causes more distress.”

She’s calling for police and the T to coordinate with city officials, especially if more unrest continues in the coming days, to find safe ways to help those who want to protest peacefully leave areas that become dangerous. But so far, she says as of Monday morning, “No one has called me yet.”

BPD have been encouraging protesters to leave, yet MBTA has been suspending all forms of transportation this past hour. I had to personally go on two rescue missions to pick up young protesters who were stranded. How are we ensuring that #AllMeansAll make it home safe? #bospoli https://t.co/v16KCEYFKM