A child psychiatrist and a social-justice educator weigh in. 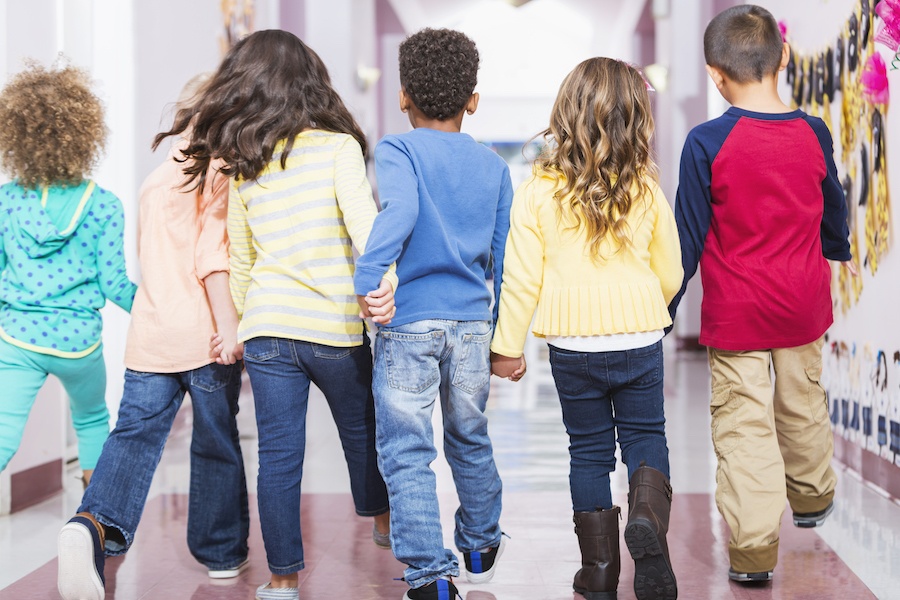 As a parent, you’re probably fresh off the heels of having challenging conversations with your child about what it means to live in a world seized by coronavirus. Now, in the aftermath of the recent deaths of George Floyd, Ahmaud Arbery, and Breonna Taylor, comes another series of difficult discussions about a disease that’s been with us far, far longer.

Whether you’re addressing concepts of racism, racial violence, and police brutality with your child for the first time or the thousandth, Francie Latour, the co-founder of Wee the People, a Boston-based social justice group that organizes educational workshops for children, and Dr. Kevin M. Simon, a clinical fellow in psychiatry at Boston Children’s Hospital, have some advice on how to go about it. Read on.

Should parents frame discussions about racism, racial violence, and police brutality differently based on their child’s age?

Simon: Yes, talk to your kids in their developmentally appropriate age. For instance, if you’re talking to a preschooler, racism is an abstract concept. But if you talk about fairness, they can begin to understand that. And particularly for [preschool-age black children], the best thing parents can do is solidify how important they are—so for example, say their skin is beautiful, their hair is beautiful. At that age, your parents are your view of the world, so parents of color should be fortifying their kids with as much positive energy as possible before kids are exposed to outside society.

For kindergartners and [elementary schoolers], again, you should be fortifying kids, but also have more open-ended conversations. In that 6-, 7-, 8-year-old range, you can talk about justice and fairness by asking, “Is it fair that Johnny always gets an extra scoop of ice cream just because of the color of his skin? Or would it be fair if Janet always got one less scoop of ice cream because of the texture of her hair?” If you give them real-world examples, they can understand that’s not fair. So you can have a softer conversation while still giving them the information. I would also recommend that, especially because we’re in the COVID pandemic and many are at home, parents of all colors should use this as an opportunity to engage with their child by reading books that talk about race, racism, and justice. When your kids are reading those books or you’re reading them with them, it gives them an opportunity to ask questions and gives the parent little avenues to integrate those conversations into the day to day. For kids between four and eight years old, there’s a book that would be helpful called Something Happened in Our Town. Another book, for kids closer to seven to 10 years old, is Sit-In: How Four Friends Stood Up by Sitting Down.

Then, by the time kids get to middle school, you’ve hopefully been spending a decade giving your kids as much information and perspective as possible. You should still talk about fairness, but you may begin to, if you haven’t already, use terms like “racism” and allow your child to ask questions and share their experiences. By the time kids are in middle school, I would say most minority children have probably experienced something, though they may not be able to put the word to it. For example, little black girls might start inquiring why their hair is different. There will also be stereotypes that, unfortunately, are either displayed on TV or on social media, and they likely will have experienced those. So you definitely want to have concrete conversations about it and make [sure] kids are equipped to respond. Middle school is critical for African American boys in particular. They’re going away from their family to basketball camps or walking to the park in groups, so [you’ll need] to have a conversation with them about how to engage with persons of authority, including police officers. Given the climate that we’re in, and that we’ve been in for a very long time, parents should have very explicit conversations with their sons about how to engage with a person of authority if they happen to be stopped because we see what kinds of negative consequences can happen.

What should white parents know about teaching their children about racism, injustice, and inequality?

Simon: You as a parent should become educated in understanding systems of oppression, structural inequities, and systemic racism before trying to engage your child. If you yourself have not experienced racism or haven’t recognized the privileges that are afforded to certain communities, you have to actually recognize that prior to having that conversation. Once you become knowledgeable and are taking steps to figure out the ways in which you as a person exist within privilege, you become an ally of under-served and minoritized communities. When you’re an ally, you can shift to being antiracist and trying to promote systems and organizations that are promoting people and communities of color. But you have to first set the example for your child. So look at your social network and ask, “Is my social network diverse?” If it’s not, it should become diverse, because if your network is diverse, then the people that your children see you socializing with and your kids’ friends will be diverse. You want to model these behaviors because when you model fairness, justice, and having friends of different colors, it allows your kid to be far more comfortable themselves engaging with people of other colors and ethnicities.

Latour: As a white parent, come to grips with how some of your ways of seeing, speaking, and making decisions have been conditioned by racism. Once that self-work starts to happen—and that self-work is never finished—then it becomes easier to talk with your child honestly about whiteness, which white parents really don’t know how to talk to their kids about. We’ve done many, many, many workshops with white adults where we ask the question, “When and how did you learn that you were white?” And people are just stopped in their tracks because they never did. That’s a serious problem. White parents racializing themselves and racializing their children is a really important step because it lets your child know that they’re in this thing, too. Race isn’t this thing that black and brown people have and you’re outside of it and you’re the norm. You have a social location, and the coordinates of that location are advantage and power that you didn’t do anything to earn. Once parents can actually begin to say those words, then you can ask, “What responsibility do we have to other people who didn’t do anything to deserve being denied all the things we enjoy?” And one of the things that we really try to emphasize with parents and caregivers is that there is no one high-stakes conversation where you have to get it all right otherwise your kid will grow up to be a racist. We advocate for a really sustained approach to talking with kids and modeling for kids. Thoughtful and intentional conversations and actions [should be] happening all along the way.

How can parents help young children learn about what it means to protest?

Latour: If a kid has a sibling or a classmate who’s taken five turns on a swing, and their turn on the swing never comes, they understand that’s not fair. They experience that emotionally in a very powerful way. It’s our job as the adults in kids’ lives to connect those powerful experiences to a larger understanding of injustice in the world. So we often talk to kids about protests as an action or a response to something that is deeply unfair, and that they happen because asking nicely or asking alone without people mobilizing behind you didn’t work. And kids absolutely understand that.

How can parents, particularly of black children, properly address their child’s fears while having honest conversations about police brutality?

Simon: For preschoolers and grade-schoolers, you have to be able to say, “There are good people and there are bad people. Sometimes bad things happen to good people. And sometimes bad things happen to people that look like us.” They might say, “Mommy, could this happen to me?” and if your child is having that emotional response, validate [it]. You want to acknowledge the fears that your child has and be open to telling your kids about what you’re feeling, too. You can say “We were scared, and we were crying because these are sad things happening to good people. But here are some of the things that Mommy and Daddy are doing about it, and we are here to protect you.” While you’re having those conversations, I would also say that generally the world is trying to move in a positive direction, but we’re still working through that, and that’s why they see people protesting. [Protesters] are trying to make sure that the world is safe for us so that we don’t have to be scared. Show them the examples of the good that’s happening.

Why is it important to involve children in antiracist activism?

Simon: Parents give their kids agency when they say, “Hey, we’re going to do activities that show that we, even the kids, feel this is important.” That’s part of the movement of being an antiracist. You’re saying “No, I don’t think it’s okay for people of color to have disadvantages.” Engaging kids in those kinds of activities is critical because you’re modeling the behavior and they’re also engaging in it. At that young age, that has a net-positive benefit downstream.

Latour: Kids are constantly filing away all kinds of information. In the absence of affirming your antiracist values, that information will come to shape their views about race, about whiteness, and about blackness.

What would you say to parents who are concerned that talking to their children about racial violence and involving them in protesting will compound the stress they may already be facing due to the COVID-19 outbreak?

Simon: Yes, the COVID pandemic is being compounded, but you can still engage while taking the appropriate social-distancing and hygiene measures as best as you can. Tell children, “We’re going to be safe. We’re going to practice the proper hygiene and we’re going to wear a mask because making sure that we stay safe and healthy is important. And it is also as important to make sure that we’re participating in activities that promote racial justice, that promote anti-racism, that promote equality for everybody.” Your kid probably realizes, “Hey, how come I’m home so much?” and they might be worried, so you should always acknowledge and validate how your kids are feeling, but you also need to explain to them that we can do two things at the same time.